The combination of the low synthesis levels of most regulatory proteins and the fact that few possess any enzymatic activity makes their detection difficult.

The combination of the low synthesis levels of most regulatory proteins and the fact that few possess any enzymatic activity makes their detection difficult. The lac repressor was first detected by virtue of its binding to iso-propyl-thio-galactoside, IPTG, an inducer of the system that is not cleaved by β-galactosidase. No small molecule effector of the mating-type factors is known, and as will be seen below, none is necessary. Some other method had to be used to identify the α protein.

One approach to the isolation of mating type encoded factors could be the DNA migration retardation assay using short DNA fragments containing an appropriate binding site. If the protein binds, the electro-phoretic migration rate of the fragment is greatly reduced. This assay is sufficiently selective that it can detect a specific DNA-binding protein present at only a tiny fraction of total protein. That is, the assay often can detect a specific DNA-binding protein in crude extracts of the cells. Nowadays this assay is the method of choice for initial attempts to detect proteins that bind to DNA.

Since α2 protein does not come equipped with a convenient enzyme assay and the DNA retardation assay was not then in wide use, Herskowitz and Johnson used a clever trick for the isolation of α2. They

fused the entire α2 gene to β-galactosidase. The fusion protein functions in vivo to repress a-specific genes normally, and theβ-galactosidase alsoretains its activity. Therefore, the enzyme can be used both to assist the purification by its known behavior in purification steps, and to assay protein fractions for the hybrid protein during the purification. Despite susceptibility to proteolytic cleavage in the cell extracts, the fusion protein could be partially purified by conventional techniques by track-ing the β-galactosidase activity through conventional fractionation steps.

Two assays of DNA binding by α2 fusion protein could be used. The first links a radioactive DNA fragment containing an α2-binding site to Staphlococcus aureus cells via antibody andα2-β-galactosidase in aDNA−α2-β-gal-antibody-cell sandwich (Fig. 16.11). The bacteria and their associated complex can be sedimented with a low speed centrifu-gation and separated from other proteins and from control DNA frag-ments not containing an α2-binding site. DNA isolated from the complex was then subjected to electrophoresis to verify that only the correct DNA fragment was sedimented in the complex. Another assay for specific binding of α2 protein was DNAse footprinting.

The binding of α2 to its recognition sequence represses expression of a mating-type genes. Mightα2 be able to repress other genes if itsbinding sequence were placed in the regulatory region? The answer was yes, but the results were not simple. We can imagine repression as 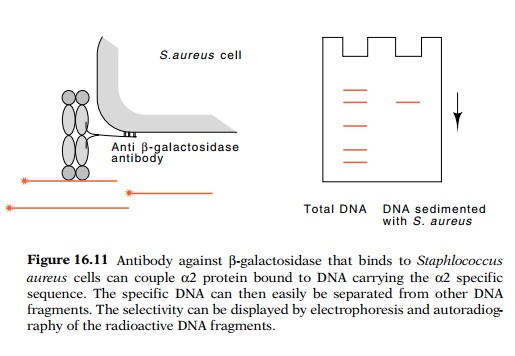 resulting from steric exclusion of the binding of another protein. This was not the case for α2 repressor. Introducing its binding site anywhere upstream of the cytochrome c gene promoter generated repression. The binding sequence could be between the enhancer and the TATA box, or even somewhat upstream of the enhancer element. It did not have to overlap another protein-binding site. Thus, α2 seems to repress by a different mechanism than by simple steric exclusion.