Data that cannot be referenced is generally known as garbage. Many high-level programming languages remove the burden of manual memory management from the programmer by offering automatic garbage collection, which deallo-cates unreachable data. Garbage collection dates back to the initial implemen-tation of Lisp in 1958. Other significant languages that offer garbage collection include Java, Perl, ML, Modula-3, Prolog, and Smalltalk.

In this section, we introduce many of the concepts of garbage collection. The notion of an object being "reachable" is perhaps intuitive, but we need to be precise; the exact rules are discussed in Section 7.5.2. We also discuss, in Section 7.5.3, a simple, but imperfect, method of automatic garbage collection: reference counting, which is based on the idea that once a program has lost all references to an object, it simply cannot and so will not reference the storage.

Section 7.6 covers trace-based collectors, which are algorithms that discover all the objects that are still useful, and then turn all the other chunks of the heap into free space.

Garbage collection is the reclamation of chunks of storage holding objects that can no longer be accessed by a program. We need to assume that objects have a type that can be determined by the garbage collector at run time. From the type information, we can tell how large the object is and which components of the object contain references (pointers) to other objects. We also assume that references to objects are always to the address of the beginning of the object, never pointers to places within the object. Thus, all references to an object have the same value and can be identified easily.

A user program, which we shall refer to as the mutator, modifies the col-lection of objects in the heap. The mutator creates objects by acquiring space from the memory manager, and the mutator may introduce and drop references to existing objects. Objects become garbage when the mutator program cannot "reach" them, in the sense made precise in Section 7.5.2. The garbage collector finds these unreachable objects and reclaims their space by handing them to the memory manager, which keeps track of the free space.

Not all languages are good candidates for automatic garbage collection. For a garbage collector to work, it must be able to tell whether any given data element or component of a data element is, or could be used as, a pointer to a chunk of allocated memory space. A language in which the type of any data component can be determined is said to be type safe. There are type-safe languages like ML, for which we can determine types at compile time. There are other type-safe languages, like Java, whose types cannot be determined at compile time, but can be determined at run time. The latter are called dynamically typed languages. If a language is neither statically nor dynamically type safe, then it is said to be unsafe.

Unsafe languages, which unfortunately include some of the most impor-tant languages such as C and C + + , are bad candidates for automatic garbage collection. In unsafe languages, memory addresses can be manipulated arbi-trarily: arbitrary arithmetic operations can be applied to pointers to create new pointers, and arbitrary integers can be cast as pointers. Thus a program theoretically could refer to any location in memory at any time. Consequently, no memory location can be considered to be inaccessible, and no storage can ever be reclaimed safely.

In practice, most C and C + + programs do not generate pointers arbitrarily, and a theoretically unsound garbage collector that works well empirically has been developed and used. We shall discuss conservative garbage collection for C and C + + in Section 7.8.3.

Garbage collection is often so expensive that, although it was invented decades ago and absolutely prevents memory leaks, it has yet to be adopted by many mainstream programming languages. Many different approaches have been pro-posed over the years, and there is not one clearly best garbage-collection algo-rithm. Before exploring the options, let us first enumerate the performance metrics that must be considered when designing a garbage collector.

• Overall Execution Time. Garbage collection can be very slow. It is impor-tant that it not significantly increase the total run time of an application. Since the garbage collector necessarily must touch a lot of data, its perfor-mance is determined greatly by how it leverages the memory subsystem.

• Space Usage. It is important that garbage collection avoid fragmentation and make the best use of the available memory.

Program Locality. We cannot evaluate the speed of a garbage collector solely by its running time. The garbage collector controls the placement of data and thus influences the data locality of the mutator program. It can improve a mutator's temporal locality by freeing up space and reusing it; it can improve the mutator's spatial locality by relocating data used together in the same cache or pages.

Some of these design goals conflict with one another, and tradeoffs must be made carefully by considering how programs typically behave. Also objects of different characteristics may favor different treatments, requiring a collector to use different techniques for different kinds of objects.

For example, the number of objects allocated is dominated by small objects, so allocation of small objects must not incur a large overhead. On the other hand, consider garbage collectors that relocate reachable objects. Relocation is expensive when dealing with large objects, but less so with small objects.

As another example, in general, the longer we wait to collect garbage in a trace-based collector, the larger the fraction of objects that can be collected. The reason is that objects often "die young," so if we wait a while, many of the newly allocated objects will become unreachable. Such a collector thus costs less on the average, per unreachable object collected. On the other hand, infrequent collection increases a program's memory usage, decreases its data locality, and increases the length of the pauses.

In contrast, a reference-counting collector, by introducing a constant over-head to many of the mutator's operations, can slow down the overall execution of a program significantly. On the other hand, reference counting does not cre-ate long pauses, and it is memory efficient, because it finds garbage as soon as it is produced (with the exception of certain cyclic structures discussed in Section 7.5.3).

Language design can also affect the characteristics of memory usage. Some languages encourage a programming style that generates a lot of garbage. For example, programs in functional or almost functional programming languages create more objects to avoid mutating existing objects. In Java, all objects, other than base types like integers and references, are allocated on the heap and not the stack, even if their lifetimes are confined to that of one function invocation. This design frees the programmer from worrying about the lifetimes of variables, at the expense of generating more garbage. Compiler optimizations have been developed to analyze the lifetimes of variables and allocate them on the stack whenever possible.

We refer to all the data that can be accessed directly by a program, without having to dereference any pointer, as the root set For example, in Java the root set of a program consists of all the static field members and all the variables on its stack. A program obviously can reach any member of its root set at any time. Recursively, any object with a reference that is stored in the field members or array elements of any reachable object is itself reachable.

Reachability becomes a bit more complex when the program has been op-timized by the compiler. First, a compiler may keep reference variables in registers. These references must also be considered part of the root set. Sec-ond, even though in a type-safe language programmers do not get to manipulate memory addresses directly, a compiler often does so for the sake of speeding up the code. Thus, registers in compiled code may point to the middle of an object or an array, or they may contain a value to which an offset will be applied to compute a legal address. Here are some things an optimizing compiler can do to enable the garbage collector to find the correct root set:

• The compiler can restrict the invocation of garbage collection to only certain code points in the program, when no "hidden" references exist.

• The compiler can write out information that the garbage collector can use to recover all the references, such as specifying which registers contain references, or how to compute the base address of an object that is given an internal address.

The compiler can assure that there is a reference to the base address of all reachable objects whenever the garbage collector may be invoked.

• Object Allocations. These are performed by the memory manager, which returns a reference to each newly allocated chunk of memory. This oper-ation adds members to the set of reachable objects.

• Parameter  Passing  and Return  Values.  References to objects  are  passed from the actual input parameter to the corresponding formal parameter, and from the returned result back to the callee.  Objects pointed to by these references remain reachable.

• Procedure Returns. As a procedure exits, the frame holding its local variables is popped off the stack. If the frame holds the only reachable reference to any object, that object becomes unreachable. Again, if the now unreachable objects hold the only references to other objects, they too become unreachable, and so on.

1.  Object Allocation.     The reference count of the new object is set to 1.

2. Parameter Passing. The reference count of each object passed into a procedure is incremented.

Procedure Returns. As a procedure exits, all the references held by the local variables of that procedure activation record must also be decre-mented. If several local variables hold references to the same object, that object's count must be decremented once for each such reference.

Transitive Loss  of Reachability.  Whenever the reference count of an object becomes zero, we must also decrement the count of each object pointed to by a reference within the object.

Example 7 . 1 1 : Figure 7.18 shows three objects with references among them, but no references from anywhere else. If none of these objects is part of the root set, then they are all garbage, but their reference counts are each greater than 0. Such a situation is tantamount to a memory leak if we use reference counting for garbage collection, since then this garbage and any structures like it are never deallocated.

The advantage of reference counting, on the other hand, is that garbage collection is performed in an incremental fashion. Even though the total overhead can be large, the operations are spread throughout the mutator's computation.

Although removing one reference may render a large number of objects un-reachable, the operation of recursively modifying reference counts can easily be deferred and performed piecemeal across time. Thus, reference counting is par-ticularly attractive algorithm when timing deadlines must be met, as well as for interactive applications where long, sudden pauses are unacceptable. Another advantage is that garbage is collected immediately, keeping space usage low. 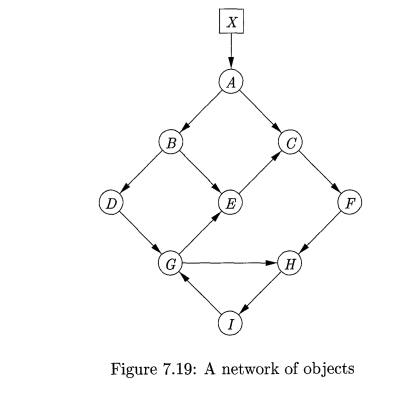 Exercise 7.5.1 :  What happens to the reference counts of the objects in Fig.

The pointer from A to B is deleted.

The pointer from X to A is deleted.

The node C is deleted.