In 1957 a substance was described (Isaacs and Lindenmann, 1957) that was produced by virus-infected cell cultures and “interfered” with infection by other viruses; it was called interferon (IFN). Over the following decades it was realized that “IFN” comprises a family of related proteins with several additional properties. Starting in the 1960s various “factors” produced primarily by white blood cells (WBC) as well as other cell supernatants were described which acted in various ways on other WBCs or somatic cells. They were usually given a descriptive name either associated with their cell of origin or their activity on other cells resulting in a myriad of names. The application of molecular technology allowed us to determine that some cyto-kines had multiple activities and that different cyto-kines had similar overlapping activities. A systematicclassification based on genetic structure and protein characterization has been effective. The interactive networks and cascades of cytokines, IFN, interleukins (IL), growth factors (GF), chemokines (CK), their receptors (r or R) and signaling pathways are highly complex and will be further explored in this chapter.

Cytokine is a term coined in 1974 by Stanley Cohenin an attempt at a more systematic approach to the numerous regulatory proteins secreted by hemopoietic and nonhemopoietic cells. Cytokines play a critical role in modulating the innate and adaptive immune systems. They are multifunctional peptides that are now known to be produced by normal and neoplastic cells, apart from those of the immune system. These local messengers and signaling molecules are involved in the development of the immune system, cell growth and differentiation, repair mechanisms and the inflam-matory cascade. Functionally, immunological cyto-kines can be classified as T-helper cells type 1 (Th1; proinflammatory), e.g., IL-2, IL-12, IL-18, IFNγ, or type 2 (Th2; anti-inflammatory) stimulating, e.g., IL-4, IL-10, IL-13, TGF-b. Cytokines include:

a)   IFNs: Proteins produced by eukaryotic cells inresponse to viral infections, tumors and other biological inducers. They promote an antiviral state in other, neighboring cells and also help to regulate the immune response. They exhibit a variety of other activities and represent a wide family of proteins.

b)   ILs: A group of cytokines mainly secreted byleukocytes and primarily affecting growth and differ-entiation of hematopoietic and immune cells. They are also produced by other normal and malignant cells and are of central importance in the regulation of hematopoiesis, immunity, inflammation, tissue remo-deling, and embryonic development. 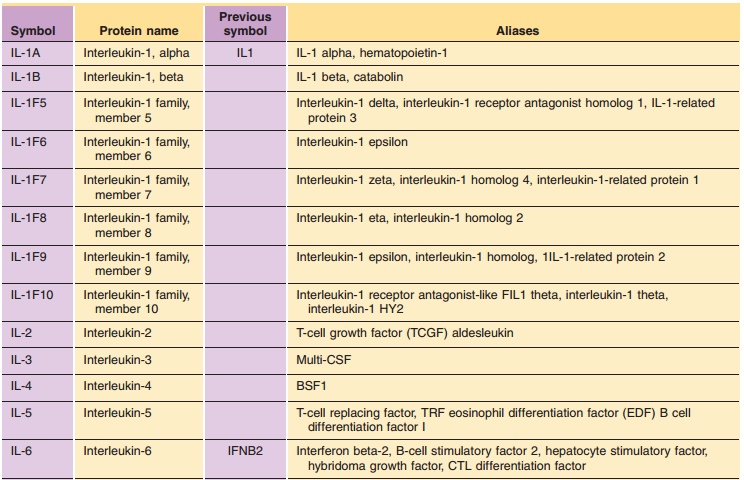 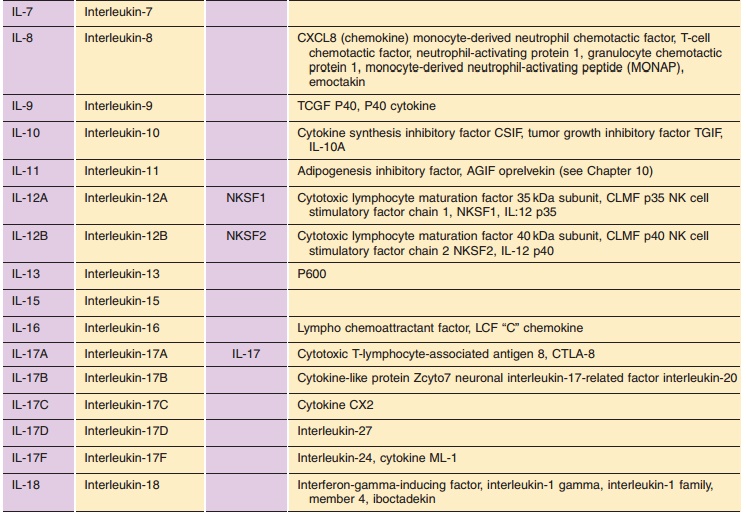 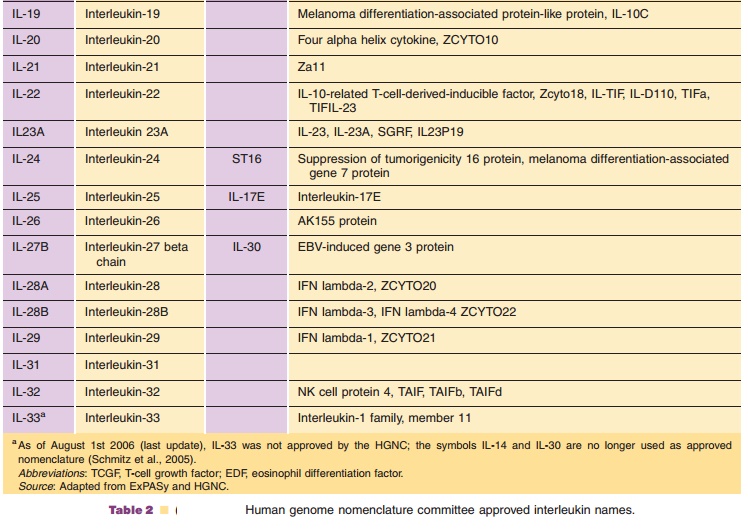 d)   CKs (chemotactic cytokines): A large family ofstructurally related low-molecular-weight proteins with potent leukocyte activation and/or chemotactic activity. “CXC” (or a) and “C–C” (or b) CK subsets are based on presence or absence of an amino acid between the first two of four conserved cysteines. A third subset, “C,” has only two cysteines and to date only one member, IL-16, has been identified. The fourth subgroup, the C–X3–C CK has three amino acid residues between the first two cysteines.

Their action is described as:

·        Autocrine, if the cytokine acts on the cell thatsecretes it,

·      Paracrine, if the action is restricted to the immedi-ate vicinity of a cytokine’s secretion, or

·        Endocrine, if the cytokine diffuses to distantregions of the body to affect different tissues.