Rapeutic Use of Recombinant Interferons

THE RAPEUTIC USE OF RECOMBINANT INTERFERONS

Together with recombinant human insulin and growth hormone, recombinant IFNα was one of the first rDNA-derived pharmaceuticals. The drive to produce recombinant IFN and other rDNA-derived pharmaceuticals developed from the need to obtain large amounts of a well-defined, purified protein for large-scale therapeutic use (Pestka, 1981a,b, 1986). Availability of the necessary basic technologies  made this possible. The history of IFNα given in the attached case history is well suited to illustrate most of the issues that need to be addressed in developing recombinant proteins. Starting in the early 1980s, a number of cytokines produced by recombinant gene technology were developed to become innovative therapeutic modal-ities called biologicals or biopharmaceuticals. Table 3 summarizes the recombinant IFNs approved for therapeutic use. 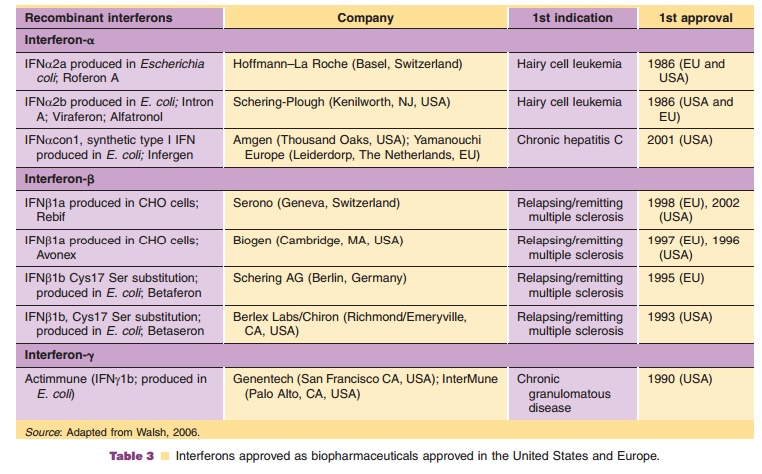 IFNα2 was developed independently by Hoffmann-LaRoche Ltd. (IFNα2a; Roferon A) and Schering Plough Corporation (IFNα2b; Intron A). Both were obtained by recombinant DNA technology in Escherichia coli, consist of 165 amino acids with anapproximate molecular weight of 19 kDa and differ by one amino acid in position 23: Lys for IFNα2a and Arg for IFNα2b (Pestka, 1986). For all practical purposes there is no difference between these two products in terms of pharmacological properties or clinical application.

Roferon A and Intron A are approved for the following indications: chronic hepatitis B and C, Kaposi’s sarcoma, renal cell carcinoma, malignant melanoma, carcinoid tumor, multiple myeloma, non-Hodgkin lymphoma (NHL), hairy cell leukemia, chronic myelogenous leukemia, thrombocytosis asso-ciated with chronic myelogenous leukemia, and other myeloproliferative disorders. The approved indica-tions vary depending on company and regulatory policies; for detailed information as well as for the recommended dosing the reader is referred to the respective product information current in their countries.

The adverse event profile for the three IFNα is the same; it is generally more or less well tolerated depending on the dose regimen used and subjectively consists primarily of the “influenza-like symptoms” named as such because they mimic the symptoms of early influenza. This, of course, should come as no surprise as these symptoms are caused by peaks of endogenous IFN stimulated by the influenza virus infection. For a detailed reporting of all adverse events, the reader is referred to the product informa-tion for each product.

Given the principle that the toxicity of a given medication is defined by its peak, i.e. by the time it is above a toxic threshold concentration and the efficacy by the trough concentration, i.e., the time the substance is below the therapeutic level, it would be desirable to obtain a therapeutic regimen which minimizes fluctuations; a constant therapeutic drug concentration would be an ideal goal. The first step toward that goal, as a proof of concept, was to model a long-acting IFN using an insulin pump to inject patients with chronic hepatitis C with IFNα2a at predetermined rates per hour for 28 days. A similar study was performed in patients with renal cell carcinoma. These studies indicated that IFNα2a at a constant dose was indeed better tolerated while showing activity when administered by continuous SC infusion (Ludwig et al., 1990; Carren˜o et al., 1992). The next step therefore was to develop a new longer acting molecule by attaching several polyethylene glycol (PEG) chains to the native IFN molecule (see section “Pegylated IFNs and Interleukins: The Next Generation”).

Roferon A is supplied as prefilled syringescontaining 3, 4.5, 6 or 9 MIU in 0.5 mL, or as cartridges containing 18 MIU/mL for SC injection only, or as vials each containing 3, 6, 9 or 36 MIU in 1 mL, or multidose injectable solution containing 9 MIU (each 0.3 mL contains 3 MIU) or 18 MIU of IFNα2a (each mL contains 6 MIU) for SC or IM injection. All presenta-tions are human serum albumin (HSA)-free liquid formulations with 7.21 mg sodium chloride, 0.2 mg polysorbate 80, 10 mg benzyl alcohol (as a preserva-tive), 0.77 mg ammonium acetate and sterile water for injections.

Infergen (IFN alphacon-1) is a synthetic “con-sensus” IFN consisting of 166 amino acids and not occurring in nature. It was genetically engineered inE. coli by Amgen. The amino acid sequence of theproduct is derived by comparison of the sequences of several natural IFNα subtypes and assigning the most frequently observed amino acid in each correspond-ing position. Infergen is supplied as single-dose, preservative-free vials containing either 9 mg (0.3 mL) or 15 mg (5 mL) of IFN alphacon-1 for SC injection.

Three IFNβ-products (Table 3) are marketed world-wide for the treatment of multiple sclerosis: the first was Berlex’s Betaseron, marketed by Schering AG as Betaferon in Europe. It is IFNβ1b with 165 amino acids and an approximate molecular weight of 18,500 Da, a cysteines-17-serine substitution. It is produced in E. coli, which was then the standard method. It is nonglycosylated, as without further engineering glycosylation is not possible in theE. coli system (Wacker et al., 2002). Independently, Biogen and Serono developed a glycosylated IFNβ1a produced in Chinese hamster ovary cells. Thus, not only is the amino acid sequence of these IFNβs identical to that of natural fibroblast-derived human IFN beta, but they are also glycosylated, each containing a single N-linked complex carbohydrate moiety. The two products are marketed as Avonex and Rebif, respectively. All three products are indicated for the treatment of multiple sclerosis.

tration (Cmax) between 1 and 8 hr with a mean peak serum IFN concentration of 40 IU/mL after a single SC injection of 0.5 mg (16 MIU). Bioavailability is about 50%. Patients receiving single intravenous (IV) doses up to 2.0 mg (64 MIU) show an increase in serum concentrations which is dose proportional. Mean terminal elimination half-life values ranged from 8.0 min to 4.3 hr. Thrice weekly IV dosing for 2 weeks resulted in no accumulation of IFNβ1b in sera of patients. Pharmacokinetic parameters after single and multiple IV doses were comparable. Following every other day SC administration of 0.25 mg (8 MIU) IFNβ1b in healthy volunteers, biologic response marker levels (neopterin, b2-microglobulin, MxA protein, and IL-10) increased significantly above baseline 6 to 12 hr after the first dose. Biologic response marker levels peaked between 40 and 124 hr and remained elevated above baseline through-out the 7-day study (168 hr).

Glycosylated IFNβ1a such as Rebif, on the otherhand, is slower to reach Cmax, with a median 16 hr and the serum elimination half-life is 69 – 37 hr (mean – SD). In healthy volunteers a single SC injection of

tions in healthy volunteers, an increase in AUC of approximately 240% was observed, suggesting that accumulation of IFNβ1a occurs after repeated admin-istration. Biological response markers [e.g., 2’, 5’-oligoadenylate synthetase (OAS), neopterin and b2-microglobulin] are induced by IFNβ1a following asingle SC administration of 60 mg. Intracellular 2’, 5’-OAS peaked between 12 and 24 hr and b2-micro-globulin and neopterin serum concentrations showed a maximum at approximately 24 to 48 hr. All three markers remained elevated for up to 4 days. Administration of 22 mg (6 MIU) IFNβ1a three times per week inhibited mitogen-induced release of proin-flammatory cytokines (IFNγ, IL-1, IL-6, TNF-aand TNF-b) by PBMC that, on average, was near double that observed with IFNβ1a administered once per week at either 22 (6 MIU) or 66 mg (12 MIU).

Betaseron/Betaferon is formulated as a sterilepowder with a 0.54% sodium chloride solution as diluent. Reconstituted it presents as 0.25 mg (8 MIU of antiviral activity) per mL. The recommended dose is 0.25 mg injected SC every other day.

Avonex is formulated as a lyophilized powderfor IM injection. After reconstitution with the sup-plied diluent (sterile water for injection) each vial contains 30 mg of IFNβ1a, 15 mg HSA, 5.8 mg sodium chloride, 5.7 mg dibasic sodium phosphate and 1.2 mg monobasic sodium phosphate in 1.0 mL at a pH of approximately 7.3, or as a prefilled syringe with a sterile solution for IM injection containing 0.5 mL with 30 mg of IFNβ1a, 0.79 mg sodium acetate trihydrate, 0.25 mg glacial acetic acid, 15.8 mg arginine hydro-chloride and 0.025 mg polysorbate 20 in water for injection at a pH of approximately 4.8. The recom-mended dosage is 30 mg injected IM once a week.

Rebif is supplied in prefilled 0.5 mL syringes:each 0.5 mL contains either 22 mg (6 MIU) or 44 mg (12 MIU) of IFNβ1a, 2 or 4 mg HSA, 27.3 mg mannitol, 0.4 mg sodium acetate, and water for injection. The recommended dosage is 22 mg (6 MIU) given three times per week by SC injection. This dose is effective in the majority of patients to delay progression of the disease. Patients with a higher degree of disability (EDSS, Expanded Disability Status Scale; Kurtzke, 1983) of 4 or higher) may require a dose of 44 mg (12 MIU) three times per week.

The adverse event profile for the three IFNβ is similar to IFNα; it is generally reasonably well tolerated and subjectively again consists primarily of the “influenza-like symptoms.” For a detailedreporting of all adverse events, the reader is referred to the product information for each biopharmaceutical.

after IM injection of 100 mg/m2, a Cmax of 1.5 ng/mL is reached in approximately 4 hr, and after SC injection a Cmaxof 0.6 ng/mL is reached in 7 hr. The apparentfraction of dose absorbed is > 89%. The mean half-life after IV administration was 38 min and after IM and SC dosing with 100mg/m2 were 2.9 and 5.9 hr, respectively. Multiple-dose SC pharmacokinetics showed no accumulation of Actimmune after 12 consecutive daily injections of 100 mg/m2.

Actimmune is a solution filled in a single-dose vialfor SC injection. Each 0.5 mL contains: 100 mg (2 MIU) of IFNγ1b, formulated in 20 mg mannitol, 0.36 mg sodium succinate, 0.05 mg polysorbate 20 and sterile water for injection. The dosage for the treatment of patients with chronic granulomatous disease or severe, malignant osteopetrosis is 50 mg/m2 (1 MIU/m2) for patients whose body surface area is greater than 0.5 m2 and 1.5 mg/kg/dose for patients whose body surface area is equal to or less than 0.5 m2.

The adverse event profile of IFNγ is similar to IFNγ; it is generally well tolerated and subjectively consists primarily of the “influenza-like symptoms.” For a detailed reporting of all adverse events, the reader is referred to the Actimmune product information.