The Pao-Sah model, published in 1966, was the first advanced long channel MOSFET model to be developed. While it retained the GCA, it didn’t invoke the depletion approximation and permitted carrier transport in the channel by both drift and diffusion current.

The formulation of the drain current equation is therfore general, but as a result requires numerical integration in two dimensions, which limits its application in CAD tools.

i . It is physically based.

ii . It gives a continuous representation of the device characteristics from weak to strong inversion even to the saturation mode of operation.

i. It requires excessive computational requriments since it requires numerical integration in two dimension, rendering it unsuitable to be used for circuit CAD.

2. The charge-sheet based models

The limited practical utility of the Pao-Sah model motivated a search for an approximate advanced analytical model, that is still accurate over a wide range of operating conditions.

The charge sheet model, introduced separately by Bacarani and Brews in 1978, has become the most widely adopted long channel MOSFET model that is accurate over the entire range of inversion.

In this model the inversion layer is supposed to be a charge sheet of infinitesimal thickness (charge sheet approximation).

i . Gradual Channel Approximation is used.

ii          . The mobility is assumed to be proportional to the electric field and is constant with position along the channel.

i . It is physically based.

ii . It gives a continuous representation of the device characteristics from weak to strong inversion even to the saturation mode of operation.

ii . The charge sheet approximation introduces negligibly small error, and it is more computationally efficient than the classical model.

i . The boundary surface potentials cannot be expressed explicitly in terms of the bias voltages applied to the device, but must be found by a numerical process.

ii . The model is not valid in depletion or accumulation.

Different approaches have been introduced to circumvent this disadvantage. In it is shown that accurate numerical solutions for these surface potentials can be obtained with negligible computation time penalty.

Although all of these approaches have given good results, they have neglected the effect of the interface trap charge which is important in determining the subthreshold characteristics of the device, namely the subthreshold swing (the gate voltage swing needed to reduce the current by one decade).

The Bulk Charge model also known as variable depletion charge model, was developed in 1964, describes the MOSFET drain current only in strong inversion but of course has less computational requirements.

i . Drift current component only is considered

i . Less computational time than the charge sheet model

i . The subthreshold region not defined

This model has great popularity, when a first estimate to device operation, or simulating a circuit with a large number of devices is required. This model is obtained from the bulk charge model, on the assumption that VDS << 2φf+VBS .

i . Drift current component only is considered ii . Constant surface potential is assumed

i . Very small computational time than any other model ii . Suitable for hand calculations

i . The subthreshold region is not defined

There exists a large number of introduced approximate models. All of these models originate from Brews' charge sheet model, where approximations to the surface potentials in various operating regions of the device have been used.

This leads to different current equations each valid only in a specific region. The resulting equations are then empirically joined using different mathematical conditions of continuity.

i . They have good accuracy in the desired region of operation.

ii . They are very efficient from the point of view of computational time.

i . The error increases in the transition regions between different modes of operations. ii . They include many non-physical fitting parameters.

The last discussed MOSFET models, have a common illness, no interface charges are included which play a great role in subthreshold region. So a modified model to the charge sheet model, which include the effect of interface charges is carried out in ICL, and will be presented now. The derivation begins by rewriting equation (2.3.1) in the following form :

where ID1 is due to the presence of drift: 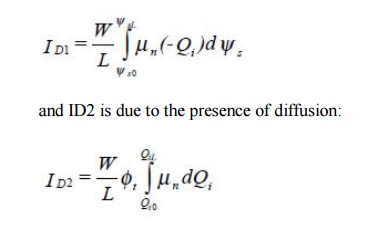 after mathematical manipulation and following the same approximations as charge sheet model we reach the following drain current equations: 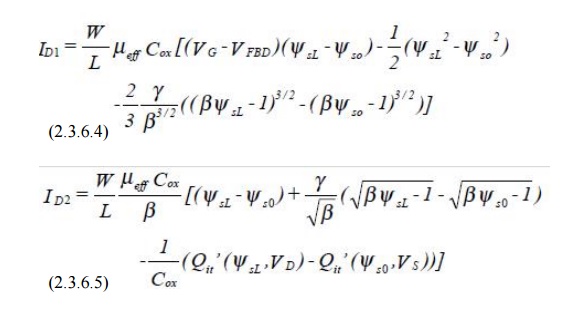 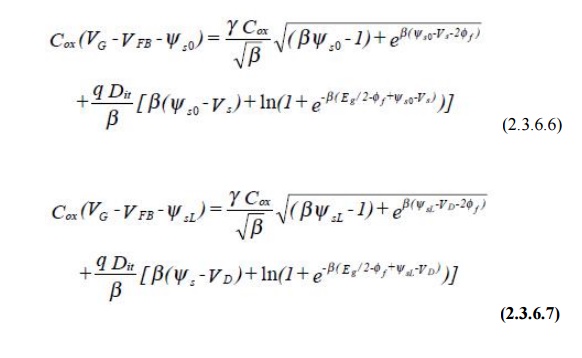 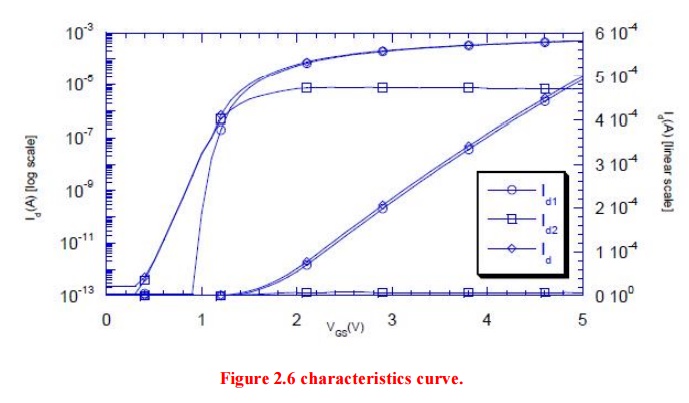