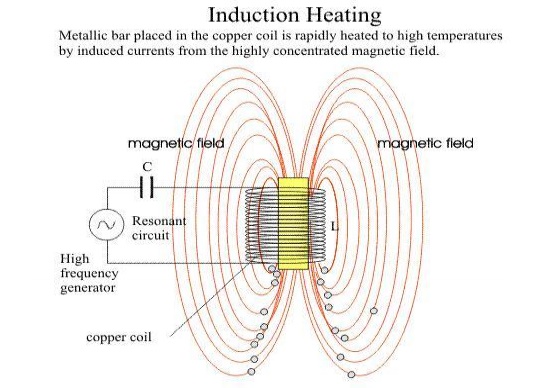 Induction heating processes make use of currents induced by electromagnetic action in the material to be heated.

Induction heating is based on the principle of transformers. There is a primary winding through which an a.c current is passed.

The coil is magnetically coupled with the metal to be heated which acts as secondary.

An electric current is induced in this metal when the a.c current is passed through the primary coil.

The following are different types of induction furnaces

It consist of an iron core, crucible and primary winding connected to an a.c supply.

The charge is kept in the cruicible, which forms a single turn short circuited secondary circuit.

The current in the charge is very high in the order of several thousand amperes. The charge is magnetically coupled to the primary winding.

The change is melted because of high current induced in it. When there is no molten metal, no current will flow in the secondary.

To start the furnace molten metal is poured in the oven from the previous charge.

This type of furnace has the following drawbacks:

The magnetic coupling between the primary and secondary is very weak, therefore the leakage reactance is very high. This causes low power factor.

Low frequency supply is necessary because normal frequency causes turbulence of the charge.

Hence the heating of the metal is interrupted. It is called pinch effect.

The crucible for the charge id of odd shape and inconvenient from the metallurgical point of view.

The furnace cannot function if the secondary circuit is open.

Such furnace is not suitable for intermittent services.

I n this type of furnace induction principle has been used for heating metals.

When the primary winding is connected to the supply, current is induced in the secondary of the metal container.

So heat is produced due to induced current. This heat is transmitted to the charge by radiation.

The portion AB of the magnetic circuit is made up of a special alloy and is kept inside the chamber of the furnace.

cutting off the heat supply.

The bar AB is removable type and can be replaced by other, having different critical temperature. Thus the temperature of the furnace can be controlled very effectively.

Coreless induction furnace also operates on the principle of transformer. In this furnace there is no core and thus the flux density will be low.

Hence for compensating the low flux density, the current supplied to the primary should have sufficiently high frequency.

Stirring of the metals takes place by the action of the electromagnetic forces. Coreless furnace may be having conducting or non conducting containers.

Fig shows a coreless induction furnace in which container is made up of conducting material.

The container acts as secondary winding and the charge can have either conducting or non conducting properties.

Stirring action in the metals takes place by the action of the electromagnetic forces. 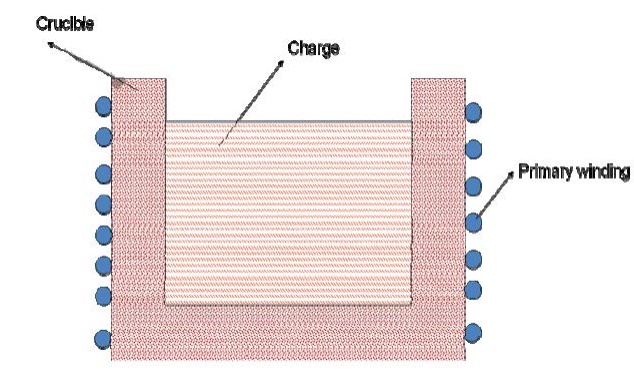 ü     Time taken to reach the melting temperature is less.

ü     Any shape of crucible can be used.

ü     The eddy currents in the charge results in automatic stirring.