1.What are the advantages of ICs over discrete circuits.?

An operational amplifier is a direct coupled high gain amplifier consisting of one or more differential amplifiers , followed by a level translator and an output stage.It is a versatile device that can be used to amplify ac as well as dc input signals & designed for computing mathamatical functions such as addition, subtraction , multiplication, integration & differentiation

3.Draw the pin configuration of IC741. 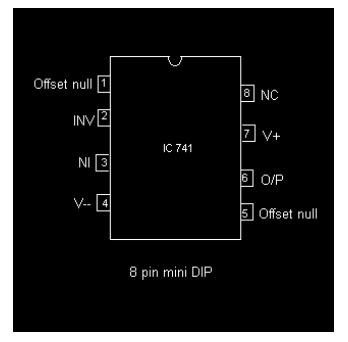 5.what are the different kinds of packages of IC741? a)Metal

b) Dual- in- line package

6.What are theassumptions made from ideal opamp characteristics?

i)The current drawn by either of the input terminals(non-inverting/inverting) is negligible.

7. Mention some of the linear applications of op – amps :

8.Mention some of the non – linear applications of op-amps:-

9.What are the areas of application of non- linear op- amp circuits?

10.What happens when the common terminal of V+ and V- sources is not grounded?

If the common point of the two supplies is not grounded, twice the supply voltage will get applied and it may damage the op-amp.

The relative sensitivity of an op-amp to a difference signal as compared to a common –mode signal is called the common –mode rejection ratio. It is expressed in decibels.

14.In practical op-amps, what is the effect of high frequency on its performance?

15. What is the need for frequency compensation in practical op-amps?

Frequency compensation is needed when large bandwidth and lower closed loop gain is desired. Compensating networks are used to control the phase shift and hence to improve the stability.

17.What are the merits and demerits of Dominant-pole compensation? *noise immunity of the system is improved.

19.Why IC 741 is not used for high frequency applications?

IC741 has a low slew rate because of the predominance of capacitance present in the circuit at higher frequencies. As frequency increases the output gets distorted due to limited slew rate.

There is a capacitor with- in or outside of an op-amp to prevent oscillation.It is this capacitor which prevents the output voltage from responding immediately to a fast changing input.