Current is taken from the source into the op-amp inputs respond differently to current and voltage due to mismatch in transistor. DC output voltages are, 1. Input bias current 2. Input offset current 3. Input offset voltage 4. Thermal drift

Current is taken from the source into the op-amp inputs respond differently to current and voltage due to mismatch in transistor.

The op-amp‘s input is differential amplifier, which may be made of BJT or FET.

·            The base currents entering into the inverting and non-inverting terminals (IB-& IB+ respectively).

·            Even though both the transistors are identical, IB- and IB+ are not exactly equal due to internal imbalance between the two inputs. 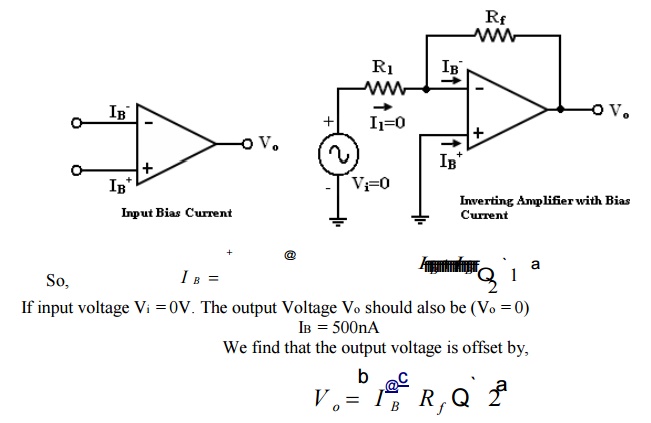 Op-amp with a 1M feedback resistor

The output is driven to 500mV with zero input, because of the bias currents.

In application where the signal levels are measured in mV, this is totally unacceptable. This can be compensated. Where a compensation resistor Rcomp has been added between the non-inverting input terminal and ground as shown in the figure below. 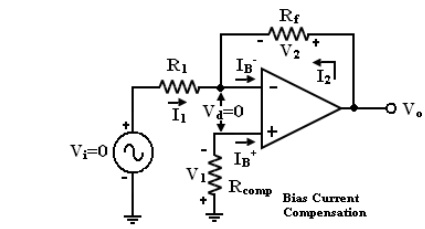 Current IB+ flowing through the compensating resistor Rcomp, then by KVL we

i.e. to compensate for bias current, the compensating resistor, Rcomp combination of resistor R1 and Rf.

Bias current compensation will work if both bias currents IB+ and IB- are equal.

Since the input transistor cannot be made identical. There will always be some small difference between IB+ and IB-. This difference is called the offset current 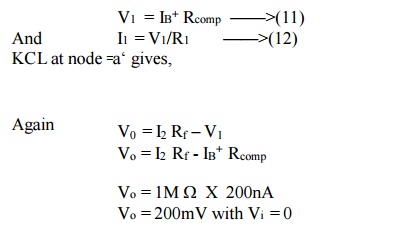 Equation (16) the offset current can be minimized by keeping feedback resistance small.

The T-feedback network is a good solution. This will allow large feedback resistance, while keeping the resistance to ground low (in dotted line).

·           The T-network provides a feedback signal as if the network were a single feedback resistor.

By T to Π conversion, 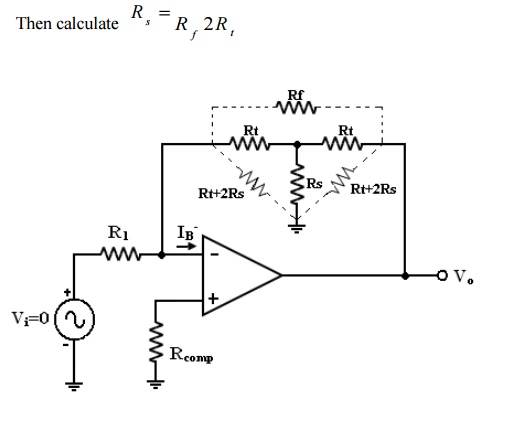 Inspite of the use of the above compensating techniques, it is found that the output voltage may still not be zero with zero input voltage [Vo ≠ 0 with Vi = 0]. This is due to unavoidable imbalances inside the op-amp and one may have to apply a small voltage at the input terminal to make output (Vo) = 0.

This voltage is called input offset voltage Vos. This is the voltage required to be applied at the input for making output voltage to zero (Vo = 0).

Let us determine the Vos on the output of inverting and non-inverting amplifier. If Vi = 0 (Fig (b) and (c)) become the same as in figure (d).

This is because IB and Vos could be either positive or negative with respect to ground. Therefore the maximum offset voltage at the output of an inverting and non-inverting amplifier (figure b, c) without any compensation technique used is given by many op-amp provide offset compensation pins to nullify the offset voltage. 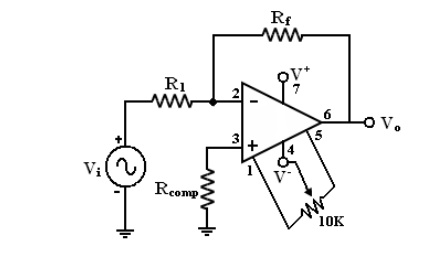 When  the  given  (below)  op-amps  does  not  have  these  offset  null  pins,  external  balancing techniques are used

·            These indicate the change in offset for each degree Celsius change in temperature.