A low-frequency or dc gain of approximately 104 is desired for a general purpose op-amp and hence, the use of active load is preferred in the internal circuitry of op-amp. The output voltage is required to be at ground, when the differential input voltages is zero, and this necessitates the use of dual polarity supply voltage. Since the output resistance of op-amp is required to be low, a complementary push-pull emitter – follower or source follower output stage is employed. Moreover, as the input bias currents are to be very small of the order of picoamperes, an FET input stage is normally preferred. The figure shows a general op-amp circuit using JFET input devices. 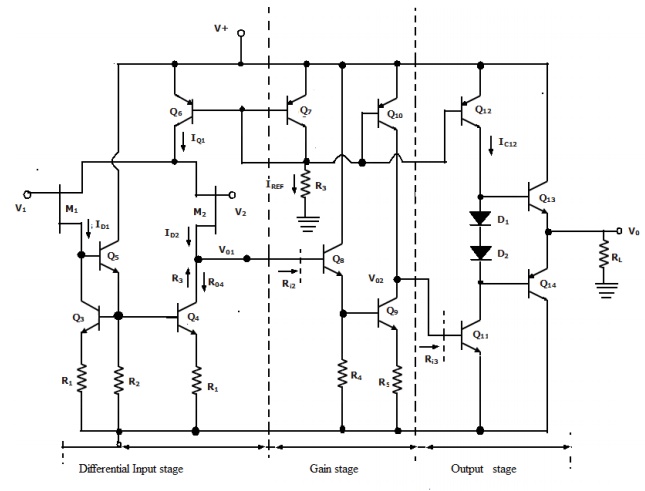 The input differential amplifier stage uses p-channel JFETs M1 and M2. It employs a three-transistor active load formed by Q3 , Q4 , and Q5 . the bias current for the stage is provided by a two-transistor current source using PNP transistors Q6 and Q7. Resistor R1 increases the output resistance seen looking into the collector of Q4 as indicated by R04. This is necessary to provide bias current stability against the transistor parameter variations. Resistor R2 establishes a definite bias current through Q5 . A single ended output is taken out at the collector of Q4 .

MOSFET‘s are used in place of JFETs with additional devices in the circuit to prevent any damage for the gate oxide due to electrostatic discharges.

The second stage or the gain stage uses Darlington transistor pair formed by Q8 and Q9 as shown in figure. The transistor Q8 is connected as an emitter follower, providing large input resistance.

Therefore, it minimizes the loading effect on the input differential amplifier stage. The transistor Q9 provides an additional gain and Q10 acts as an active load for this stage. The current mirror formed by Q7 and Q10 establishes the bias current for Q9 . The VBE drop across Q9 and drop across R5 constitute the voltage drop across R4 , and this voltage sets the current through Q8 . It can be set to a small value, such that the base current of Q8 also is very less.

The final stage of the op-amp is a class AB complementary push-pull output stage. Q11 is an emitter follower, providing a large input resistance for minimizing the loading effects on the gain stage. Bias current for Q11 is provided by the current mirror formed by Q7 and Q12, through Q13 and Q14 for minimizing the cross over distortion. Transistors can also be used in place of the two diodes.