Any. Young and old are at greater risk.

The causes of hyponatraemia are given in Table 1.1. It is most useful to consider the causes according to whether 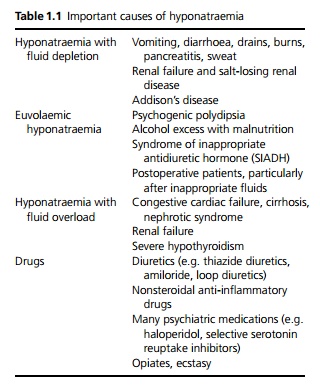 it is acute or chronic and whether there is fluid depletion, euvolaemia or fluid overload.

·        Acute hyponatraemia is usually due to vomiting and diarrhoea and/or inappropriate intravenous fluids such as dextrose or dextrosaline.

Normally when serum osmolality falls, ADH production ceases and the kidneys rapidly excrete the excess water (up to 10–20 L/day). In order for the kidneys to excrete water there needs to be the following:

·        Adequate filtrate reaching the thick ascending loop of Henle (where sodium is extracted to produce a dilute urine). This is impaired in renal failure and hypovolaemia (reduced glomerular filtration rate) or reduced effective circulating volume such as in cardiac failure.

·        Adequate active reabsorption of sodium at the loop of Henle and distal convoluted tubule, this is impaired by all diuretics.

·        A collecting duct that is impermeable to water, so that dilute urine is excreted. ADH acts on the collecting duct to make it permeable. Any cause of raised ADH will increase water reabsorption and hence tend to cause hyponatraemia. ADH is increased in SIADH, hypovolaemia, reduced effective circulating volume (e.g. cardiac failure, nephrotic syndrome), postoperatively (pain and stress), and increased ADH activity is caused by certain drugs. Lack of glucocorticoid can also cause increased permeability of the collecting duct, because cortisol inhibits ADH.

·        In psychogenic polydipsia, patients drink such large volumes of water that the ability of the kidney to excrete it is exceeded. In chronic alcoholics who are malnourished, the renal ability to excrete free water may be markedly impaired due to lack of dietary solutes to as little as 4 L a day and any excess fluid may cause hyponatraemia.

As serum sodium levels fall, water moves from the extra-cellular compartment into cells. The brain is most sensitive to this and if hyponatraemia occurs rapidly oedema develops, leading to raised intracranial pressure, brain-stem herniation and death. If hyponatraemia develops more slowly, the cells can offset the change in osmolality by extrusion of organic solutes. This reduces the degree of water movement and there is less cerebral oedema. When treatment is initiated, if serum sodium levels are corrected too rapidly in a patient who has had chronic hyponatraemia, cell shrinkage can occur due to movement of water out of the cells, causing more damage.

Symptoms of hyponatraemia include lethargy, anorexia, nausea, vomiting, fatigue, headache, confusion and a decreased conscious state. The severity depends on the degree of hyponatraemia and the rapidity at which it develops. In severe cases, the patient may have seizures or become comatose. It is important to take a careful drug history, including the use of any illicit drugs such as heroin or ecstasy. There may be symptoms and signs of fluid depletion or fluid overload.

To determine the cause of hyponatraemia the following tests are needed: the plasma osmolality, urine osmolality and urine sodium concentration.

·         Plasma osmolality is low in most cases of hyponatraemia. If it is normal or high, this is pseudohyponatraemia, which may be due to abnormally high lipid levels or the presence of other osmotically active agents in the blood such as glucose (hyperglycaemia). In these cases treatment is aimed at the underlying cause.

·        Urine osmolality helps to differentiate the causes of hyponatraemia with a low plasma osmolality. If there is raised ADH secretion (as in most cases) the urine remains concentrated at ≥300 mosmol/kg. If the urine is dilute, this suggests psychogenic polydipsia or excessive inappropriate intravenous dextrose or dextrosaline.

·        Urine sodium concentration is low (≤20 mmol/L) in hypovolaemia (although it is falsely raised by diuretic therapy or if there is renal salt-wasting). Fluid repletion should lead to the production of dilute urine (low osmolality) with higher sodium concentrations. However, in SIADH, the urine remains concentrated despite a low plasma osmolality.

In addition, thyroid function tests and cortisol should be checked as there are often multifactorial causes in hyponatraemia and leaving these conditions undetected and untreated is potentially life-threatening. A short Synacthen test may also be indicated.

In all cases, treating the underlying cause successfully will lead to a return to normal values.

·        Fluid depletion is treated with saline or colloid replacement.

·        Water overload is best treated by fluid restriction to as little as <1 L/day but in severe cases diuretics with hypertonic saline may be given. Mannitol can be used to reduce cerebral oedema. Anticonvulsants may be necessary to treat fits.

·        In salt and water overload, continued diuretics with water restriction are used. Intravenous saline should be avoided and patients must adhere to a low-sodium diet. In severe nephrotic syndrome with oedema, intravenous albumin may be required together with diuretics.