The plasma and cellular composition of blood change sig-nificantly during pregnancy, with the expansion of plasma volume proportionally greater than that of the red blood cell mass.

The plasma and cellular composition of blood change sig-nificantly during pregnancy, with the expansion of plasma volume proportionally greater than that of the red blood cell mass. On average, there is a 1000-mL increase in plasma volume and a 300-mL increase in red-cell volume (a 3:1 ratio). Because the hematocrit (Hct) reflects the pro-portion of blood made up primarily of red blood cells, Hct demonstrates a “physiologic” decrease during pregnancy; therefore, this decrease is not actually an anemia.

Anemia in pregnancy is generally defined as an Hct less than 30% or a hemoglobin of less than 10 g/dL.

The direct fetal consequences of anemia are minimal, although infants born to mothers with iron deficiency may have diminished iron stores as neonates. The maternal consequences of anemia are those associated with any adult anemia. If anemia is corrected, the woman with an ade-quate red-cell mass enters labor and delivery better able to respond to acute peripartum blood loss and to avoid the risks of blood or blood product transfusion.

Iron-deficiency anemia is by far the most frequent type ofanemia seen in pregnancy, accounting for more than 90% of cases. Because the iron content of the standard American diet and the endogenous iron stores of many American women are not sufficient to provide for the increased iron requirements of pregnancy, the National Academy of Sciences recommends 27 mg of iron supplementation (present in most prenatal vitamins) daily for pregnant women. Most prescription prenatal vitamin/mineral prepa-rations contain 60 to 65 mg of elemental iron.

All pregnant women should be screened for iron-deficiency anemia. Severe iron-deficiency anemia is charac-terized by small, pale erythrocytes (Fig. 14.1) and red-cell indices that indicate a low mean corpuscular volume and low mean corpuscular hemoglobin concentration. Addi-tional laboratory studies usually demonstrate decreased serum iron levels, an increased total iron-binding capacity, and a decrease in serum ferritin levels. A recent dietary history is obviously important, especially if pica (the con-sumption of non-nutrient substances such as starch, ice, or dirt) exists. Such dietary compulsions may contribute to iron deficiency by decreasing the amount of nutritious food and iron consumed. 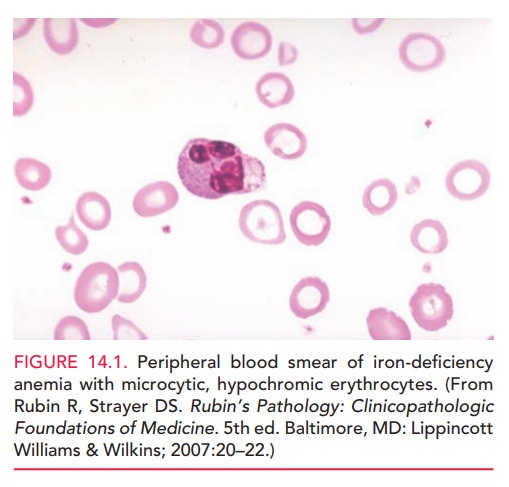 Treatment of iron-deficiency anemia generally requires an additional 60 to 120 mg of elemental iron per day, in ad-dition to the iron in the prenatal vitamin/mineral prepa-ration. Iron absorption is facilitated by or with vitamin C supplementation or ingestion between meals or at bed-time on an empty stomach. The response to therapy is first seen as an increase in the reticulocyte count approximately 1 week after starting iron therapy. Because of the plasma expansion associated with pregnancy, the Hct may not increase significantly, but rather stabilizes or increases only slightly.

The first occurrence of NTDs may be reduced by as much as 36% if women of reproductive age consume 0.4 mg of folate daily both before conception and during the first trimester of pregnancy. The Recommended Daily Dietary Allowance for folate for pregnant women is 0.6 mg. Folate deficiency is especially likely in multiple gestations or when patients are taking anticonvulsive medications. Women with a history of a prior NTD-affected pregnancy or who are being treated with anticonvulsive drugs may reduce the risk of NTDs by more than 80% with daily intake of 4 mg of folate in the months in which conception is attempted and for the first trimester of pregnancy.

Folate is found in green leafy vegetables and is now an added supplement in cereal, bread, and grain prod-ucts. These supplements are designed to enable women to easily consume 0.4 mg to 1 mg of folate daily. Prescription prenatal vitamin/mineral preparations contain 1 mg of folic acid.

The hemoglobinopathies are a heterogenous group of single-gene disorders that includes the structural hemoglo-bin variants and the thalassemias. Hereditary hemolyticanemias are also rare causes of anemia in pregnancy.Some examples are hereditary spherocytosis, an autosomal dominant defect of the erythrocyte membrane; glucose 6-phosphate dehydrogenase deficiency; and pyruvate kinase deficiency.