Home | | Obstetrics and Gynecology | Fetal Morbidity and Mortality in Pregestational and Gestational Diabetes
Posted On :  11.10.2017 06:14 am

Fetal Morbidity and Mortality in Pregestational and Gestational Diabetes

Infants of mothers with diabetes are at a six-fold increased risk of congenital anomalies over the 1% to 2% baseline risk of all patients.

Fetal Morbidity and Mortality in Pregestational and Gestational Diabetes

Infants of mothers with diabetes are at a six-fold increased risk of congenital anomalies over the 1% to 2% baseline risk of all patients. The most commonly encountered anomalies arecardiac and limb deformities. Sacral agenesis is a unique but rare anomaly for this group (Fig. 14.2). 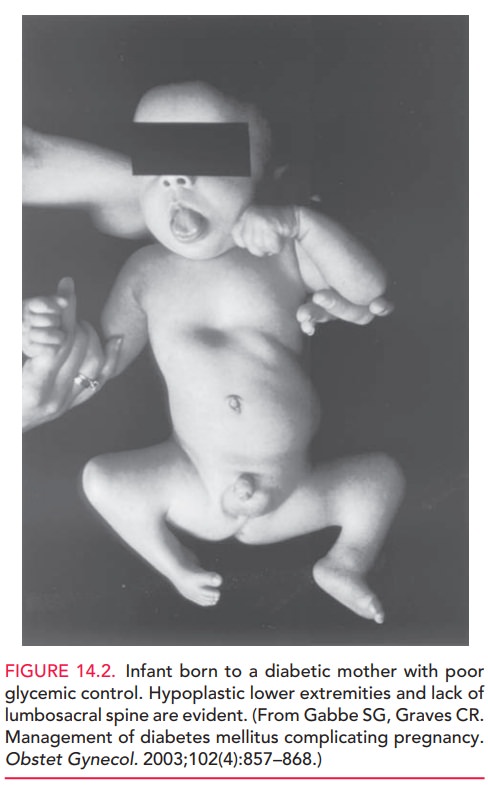 There is also an in-creased risk of intrauterine fetal demise and stillbirth, especially when diabetic control is inadequate. Because of this potentiallydevastating outcome, beginning at approximately 30 to 32 weeks of gestation, various antepartum fetal tests may be initiated to monitor fetal health (see “Antepartum Fetal Monitoring” sections below).

Infections occur more frequently in mothers with diabetes. The glucose-rich urine is an excellent environ-ment for bacterial growth; the risk of urinary tract infec-tion (UTI) and pyelonephritis is approximately double that of nondiabetic pregnant patients. Patients should be told to promptly report any symptoms that suggest infection so that identification and treatment can be initiated.

Excessive fetal growth, or macrosomia (usually defined as a fetal weight in excess of either 4000 or 4500 g), is more common in pregnant patients with diabetes because of the fetal metabolic effects of increased glucose transfer across the placenta. However, intrauterine growth restriction can also occur due to uteroplacental insufficiency. For these reasons, serial ultrasonography is often performed to follow fetal growth. When the estimated fetal weight by ultrasound late in pregnancy is greater than 4500 g, cesarean delivery is often recommended to avoid the risk of fetopelvic dis-proportion, shoulder dystocia, and other birth trauma as-sociated with large infants.

Another complication of pregnancy in patients with dia-betes is an increase in amniotic fluid volume greater than 2000 mL, a condition known as hydramnios or polyhydram-nios. Encountered in approximately 10% of mothers withdiabetes, the increases in amniotic fluid volume and uter-ine size are associated with an increased risk of placental abruption and preterm labor, as well as postpartum uter-ine atony. This condition is monitored while serial ultra-sonography is performed for fetal growth, at which time the amount of amniotic fluid can be evaluated.

Neonatal hypoglycemia is often encountered in in-fants of women with diabetes. It results from the sudden change in the maternal-fetal glucose balance, in which an increased maternal glucose crossing the placenta is coun-tered by an increase in fetal production of insulin. However, when the maternal supply of glucose is removed, this higher level of insulin can cause significant neonatal hypoglycemia. In addition, these newborns are subject to an increased incidence of neonatal hyperbilirubinemia, hypocalcemia, and polycythemia.

Infants of mothers with diabetes also tend to have an increased frequency of respiratory distress syndrome. The usual tests of lung maturity may be less predictive for these infants (see respiratory - next section ).