Poor health is a major problem in India which contributes to the many health problems. Following are three causes of poor health in India.

Poor health is a major problem in India which contributes to the many health problems. Following are three causes of poor health in India.

Health problems are classified in to 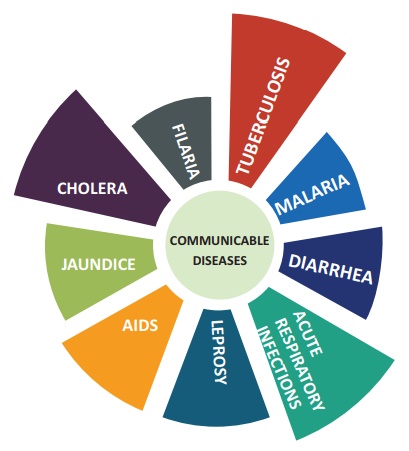 Tuberculosis is a leading communicable disease in India accounting for one-fifth of the world incidence. Pulmonary Tuberculosis is contagious bacterial infection caused by

Mycobacterium Tubercle, which mainly affects lung. According to the Global TB report 2017 the estimated incidence of TB in India was approximately 28,00,000 accounting for about a quarter of the world’s TB cases. Every year about 1.2 million persons develop Tuberculosis of which 0.64 million cases are sputum positive which is highly infectious and 0.32 million people die due to TB. The emergence of HIV-TB co-infection and multidrug resistant TB has become a challenge today.

Acute respiratory diseases are one of the major causes of sickness and death in children below 5 years of age. During 2011, nearly 26.3 million episodes of Acute Respiratory Infection were reported with 2,492 deaths.

Leprosy is a chronic infectious disease which is caused by Mycobacterium Leprae. It mainly affects the skin, the peripheral nerves, the mucosa of the upper respiratory tract and the eyes. It is curable when the treatment started in the early stages prevents disability. Multidrug therapy, made available by WHO free of cost to all patients worldwide since 1995, provides a simple but highly effective cure for all types of leprosy. Control of leprosy has improved significantly by Integration of basic leprosy services into general health services to diagnose and provide treatment of the disease within easy reach(PHC). WHO has launched a new global strategy in 2016 –2020: accelerating towards a leprosy-free world – which aims to leprosy control and prevent disabilities.

Since AIDS was first detected in the year 1986 and worldwide it stands in third place. It is estimated that by the end of year 2016, there were about 2.1million cases of HIV positive cases and 62000 people died from AIDS related illnesses in the country. 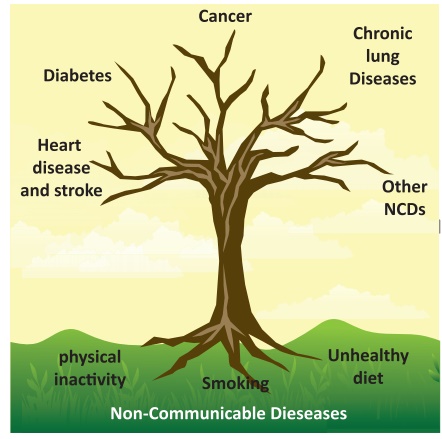 NCDs are the leading cause of death in the world, responsible for 63% of the 57 million deaths that occurred in 2008.The majority of these deaths are due to cardiovascular diseases and diabetes, cancers and chronic respiratory diseases. More than nine million of all deaths attributed to noncommunicable diseases (NCDs) occur before the age of 60. Behavioral risk factors, including tobacco use, physical inactivity, and unhealthy diet, are responsible for about 80% of coronary heart disease and cerebro vascular disease.

Millions of deaths due to Non Communicable Diseases which can be prevented by promoting the public awareness and participation.

·  Reducing/Stop the use of alcohol;

According to WHO, "Malnutrition refers to deficiencies, excess or imbalances in a person's intake of energy and/or nutrients"

Undernutrition: Refers to lack of proper nutrition, caused by not having enough food or not eating enough food containing substances necessary for growth and health.

Over nutrition: Is a form of Malnutrition in which nutrients are oversupplied relative to the amounts required for normal growth, development and metabolism. 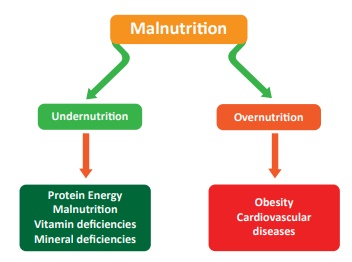 a) Protein Energy Malnutrition- : Caused by the defeciencies of protein and calories. It occurs more commonly among weaned infants and pre school children

Kwashiorkor is the deficiency of protein in the diet.

Marasmus - severe deficiency of protein and energy in the diet.

b)  Vitamin Defeciencies: caused by the deficiency of vitamins in the diet.

c)  Mineral defeciencies: caused by the deficiency of minerals in the diet

Environmental sanitation is the most difficult problem to handle in our country which is multi-factorial and multifaceted.

Major environmental problems in India are

Improper waste disposal and low level of sanitation leads to soil pollution and breeding places of insects, flies and rodents.

·  Degradation of land Industrialization and urbanization

·  Excessive use of fertilizers and chemicals in agriculture.

In rural area 74% population doesn’t get benefit of modern curative and preventive health services. Approximately 80% of health services are concentrated in urban area. Addressing to meet inadequate and uneven distribution of doctors, and medical services between rural and urban is the challenging task to health sector.

During Independence in 1947 India's Population was 30 crores. As on 2018 now it is the second most populated country in the world, current population is 1.35 billion. The population problem is the important problem faced by our country which affects all aspects of, sanitation, housing, health care and environment. 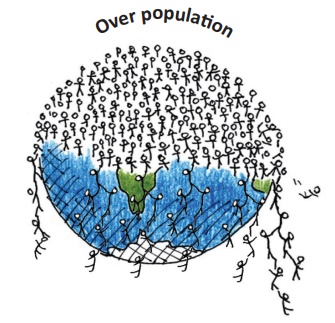