After the introduction of agriculture about 8,000 to 12,000 years ago, the size of population was small, roughly 8 million. In the first century (C.E) it was below 300 million.

After the introduction of agriculture about 8,000 to 12,000 years ago, the size of population was small, roughly 8 million. In the first century (C.E) it was below 300 million. The expanding world trade during the sixteenth and seventeenth century, set the stage for rapid population growth. Around 1750, at the dawn of Industrial Revolution, the world population was 550 million. World population exploded in the eighteenth century after the Industrial Revolution. Technological advancement achieved so far helped in the reduction of birth rate and provided a stage for accelerated population growth.

The new projections include some notable findings at the country level. . China (with 1.4 billion inhabitants) and India (1.3 billion inhabitants) remain the two most populous countries, comprising 19% and 18% of the total global population respectively. In roughly seven years, or around 2024, the population of India is expected to surpass that of China.

Among the ten largest countries worldwide, Nigeria is growing the most rapidly. Consequently, the population of Nigeria, currently the world’s 7th largest, is projected to surpass that of the United States and become the third largest country in the world shortly before 2050.

Most of the global increase is attributable to a small number of countries.

From 2017 to 2050, it is expected that half of the world’s population growth will be concentrated in just nine countries: India, Nigeria, Congo, Pakistan, Ethiopia, the United Republic of Tanzania, the United States of America, Uganda and Indonesia (ordered by their expected contribution to total growth).

The group of 47 least developed countries (LDCs) continues to have a relatively high level of fertility, which stood at 4.3 births per woman in 2010-2015. As a result, the population of these countries has been growing rapidly, at around 2.4 % per year. Although this rate of increase is expected to slow significantly over the coming decades, the combined population of the LDCs, roughly one billion in 2017, is projected to increase by 33 % between 2017 and 2030, world population will reach 9.7 billion in 2050.

Similarly, Africa continues to experience high rates of population growth. Between 2017 and 2050, the populations of 26 African countries are projected to expand to at least double their current size.

The concentration of global population growth in the poorest countries presents a considerable challenge to governments in implementing the 2030 Agenda for Sustainable Development, which seeks to end poverty and hunger, expand and update health and education systems, achieve gender equality and women’s empowerment, reduce inequality and ensure that no one is left behind. 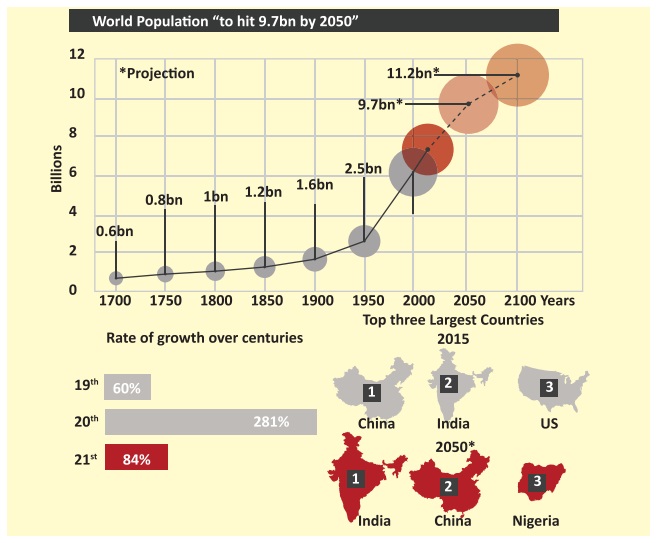 Regional division on the basis of growth rate

On the basis of the growth rate of population the world can be divided into the following three types of areas:

This category includes the developing countries like Pakistan, Afghanistan, Brazil, Bolivia, Mongolia, Indonesia and many other Africa and South American countries, where the growth rate of nearly 2 % is also included among these countries though the growth rate here has started declining.

Countries like Mexico, Iran, Colombia, Venezuela, Peru, Libya, Algeria, Sudan, Kenya and Kuwait make this category. In fact, most of the African countries with a growth rate of 3% fall in this category.

i. Over population: situation whereby the population is considered too large for the available resources.

ii. Under – population: a situation where the population is less than the available resources of a country.

iii. Optimum – population: a situation where the number of people that can be supported is the same as the available resources.

* India population is 17.74% of the total world population.

* India ranks number 2 in the list of countries (and dependencies) by population.