Absolute numbers do not give any indication of the impact of population on the land and its resources. The number of persons living per unit of land areas gives a better picture. This is expressed in the form of density of population per sq.km of land area.

It is obtained by dividing the total land area by the total population, the quotient being the number of people per square kilometre. Compared with simple arithmetic density, physiological or nutritional density is a more refined method of calculating man-land ratios.

Fertile plains with favourable climate and highly industrialised and urbanised areas are generally densely populated. There are four major areas of high density of population with more than 100 persons per sq.km. Areas include:

a. Eastern Asia, including china, Japan and Republic of Korea.

c. North-Eastern part of the United States of America.

Of the four regions given, the first two i.e. Eastern Asia and South Asia have high density of population due to favourable environmental conditions such as favourable climate, fertile soil and large areas of plains which encourage the growth of agriculture. The plains and river valleys of India and China are densely populated. In the last two groups i.e. North Eastern United States of America and North – Western Europe which are densely populated due to the concentration of manufacturing industries.

HOTS: Why has Singapore the highest physiological/nutritional density of population in the world?

The areas of moderate density of population have between 10 and 80 persons per sq.km. The areas of moderate density of population include Central part of the United States of America, Tropical Western Africa, Western blocks of Russia, Eastern Europe, Deccan Plateau of India, Central China, Southern portion of the Plateau of Mexico, North -Eastern Brazil and Central Chile, The above areas are characterised by the well developed agricultural activities, favourable climate, fertile soils, fishing, etc,.

About half the area of the world has population less than 10 persons per sq.km. Certain vast areas remain completely uninhabited. The main areas are

b. Arctic area of Canada, Greenland and the Polar regions. 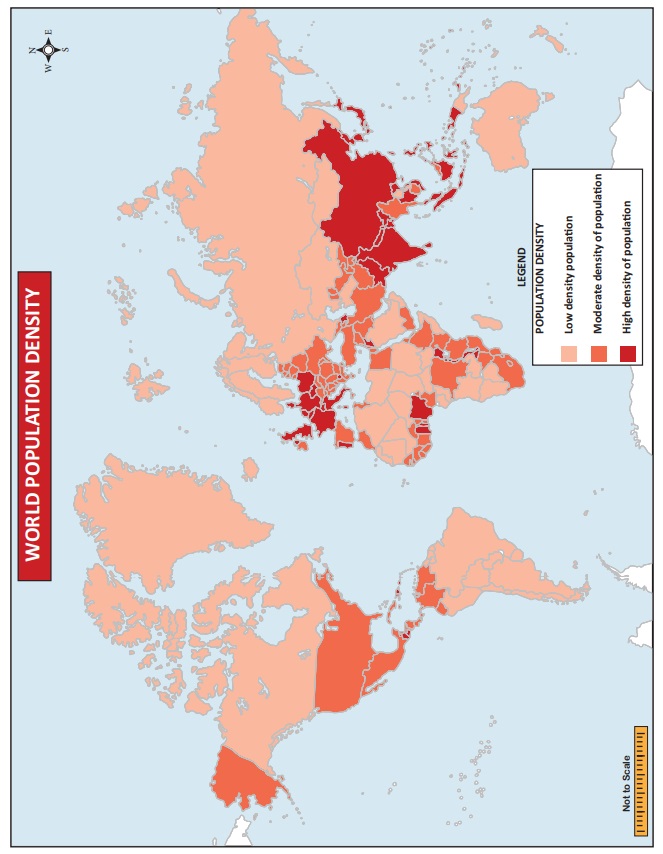 a. Bad and unfavourable environment conditions for human settlement.

b. Lack of economic activities.

c. Lack of transport and communication.

1. Population: A group of individuals of the same species occupying a particular geographic area.

2. People: The members of a particular nation, community, or ethnic group.

E= number of people emigrating out of the country

I= number of people immigrating into the country

6. Fertility Rate: is the number of live births expected per 1000 women in their life times in a specified geographic area and for a specific point in time, usually a calendar year. Niger has the highest fertility rate of 6.49 while Singapore has the lowest fertility rate of 0.83. Can you guess why there is variation between these countries?

Number of dependents in a population divided by the number of working age people. It’s a calculation which groups those aged under 15 with those over 65 years as the ‘dependants’ and classifying those aged 15-64 years as 'the working-age population'.

10. Adult Literacy Rate: The Adult literacy index (ALI) is a statistical measure used to determine how many adults can read and write in a certain area or nation. Adult literacy is one of the factors in measuring the Human Development Index (HDI) of each nation, along with life expectancy, education, and standard of living. Burkina faso has the lowest literacy rate of 21.8% ( 2015). How does literacy rate affect the standard of living of a country?