The sex ratio is the ratio of males to females in a population.

With an astounding ratio of 315 males to a 100 females, Qatar holds the number one spot among countries with the highest male to female ratio in the world in 2018.

Cisgender (often abbreviated to simply CIS) is a term for people whose gender identity matches the sex that they were assigned at birth. It is the opposite of the term transgender.

What Are Population Age Pyramids?

Latvia, country with the highest sex ratio in the world.

Latvia is a former Soviet Union country and experienced a great decline in male population during World War two. By 2015, there were 84.8 males for every 100 females. The proportion of the female was 54.10% of the total population. Men in Latvia have a high mortality rate due to issues such as alcoholism, smoking, and careless car driving. Around 80% of suicides in Latvia are committed by men, often because of unemployment and unrealized financial goals. Women enjoy a longer life expectancy living 11 years more than men.

Total number of literate persons in a given age group, expressed as a percentage of the total population in that age group.

Literacy rates continue to rise from one generation to the next. Yet according to new data from the UNESCO Institute for Statistics, there are still 750 million illiterate adults, two-thirds of whom are women. These numbers are a stark reminder of the work ahead to meet Sustainable Development Goals (SDGs) 4 and 5 and the Education 2030 targets.

There are three types of Age - Sex pyramids: expansive, constrictive, and stationary.

Expansive Age - Sex pyramids depict populations that have a larger percentage of people in younger age groups. Populations with this shape usually have high fertility rates with lower life expectancies. Many third world countries have expansive Age - Sex pyramids. Such a population pyramid is a characteristic of newly developing countries such as Afghanistan, Bangladesh, Kenya, and some countries of Latin America.

Stationary  Age  -  Sex  pyramidsare  those  that  show  a  somewhat  equal  proportion  of  the  population  in  each  age  group.  There  is  not  a  decrease  or  increase  in  population;  it  is  stable.  Austria has a stationary Age - Sex pyramid 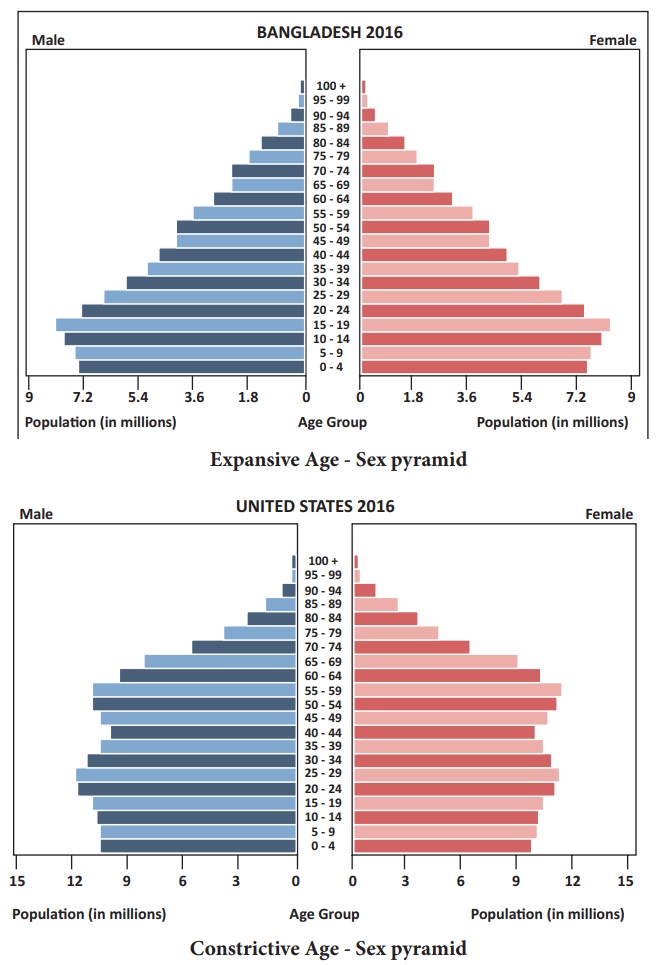 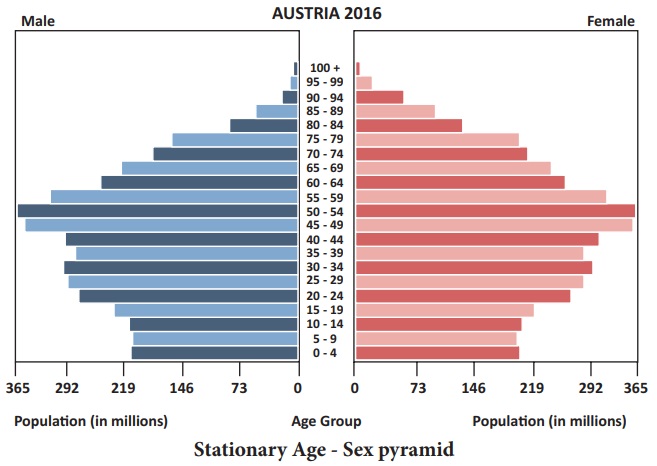 Presently Tripura has the highest literacy rate in India, 94.65 percent. According to the 2011 census, literacy level was 93.91 percent in Kerala and 91.58 percent in Mizoram, among the most literate states in the country. The national literacy rate, according to the 2011 census, was 74.04 percent. The Tripura success story is attributed to the involvement of local government bodies, including Gram panchayats, NGOs and local clubs under the close supervision of the State Literacy Mission Authority (SLMA) headed by the chief minister. Tripura attained 87.75 percent literacy in the 2011 census, from the 12th position in the 2001 census to the 4th position in the 2011 census. Among projects implemented by the state government to increase literacy in the state are

* Policy of no fail till class VIII to prevent children from dropping out.

* Midday meals in all schools with an eclectic menu for all days of the week to attract more students.

* No tuition fee in government colleges.

The holistic education system, implemented with equal interest in Agartala, remote areas and the tribal autonomic areas makes sure that people in Tripura do not just become literate but educated, officials emphasized. One pointer to the government's interest in education is the near-total absence of child labour in Tripura.

The Purpose of the Age - Sex Pyramid

The purpose of making this Age - Sex pyramid is to find out the comparison between the number of men and women, the number of workers, and the structure of the population in a country quickly. In addition, the creation of the Age - Sex Pyramid also has a purpose to assist the government in taking development policies.