Gross Domestic Product and its Growth: an Introduction

The GDP is the market value of all the final goods and services produced in the country during a time period. GDP=C+I+G+(X−M) ; C = Consumption I = Investment ; G = Government Expenditure ; ( X − M) = X = Exports − M = Imports Every part of the definition is important.

Gross Domestic Product and its Growth: an Introduction

• To know about the meaning of Gross Domestic Product

• To Understand the basic various measures of National Income

• To Understand the composition of GDP

• To know the contribution of different sectors in GDP

• To know the economic growth and development and its differences

• To know about Development path based on GDP And Employment

• To understand the growth of GDP and Economic Policies

To understand how the GDP tells us how India is doing, you should understand what GDP is.

Imagine what happens in a hotel. You place an order for two Idlis and a cup of tea. Someone makes the idlis and tea and someone else serves you.

Idlis and tea are produced . These are tangible, physical things you can touch and feel. Economists call such tangible items “goods”. These goods are not free but have to pay or to be paid.

Though you don’t realise it in addition to these tangible things called goods, something else is being produced : the work done by the cooks and the people who serve the food. The activity of cooking and serving is not something you can feel and touch. Such activities are not tangible but are nevertheless crucial for you to enjoy the food. Economists call such activity “services”.

What happens everyday in a hotel at nation wide: goods and services are produced and paid for and this what the GDP measures. 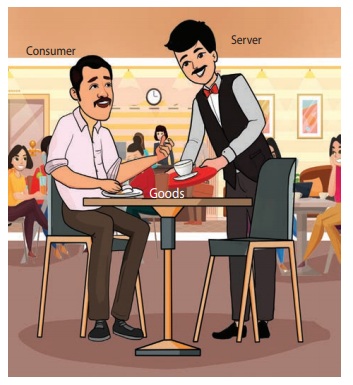 The GDP is the market value of all the final goods and services produced in the country during a time period.

Goods and services: As you know by now, goods are tangible items while services are activities which are intangible .

Market value: This is the price at which goods and services are sold in the market.

For example, a cup of tea bought in a hotel is a final good because it is consumed and does not form a part of producing something else. So the market value of the cup of tea, being a final good, is included in the GDP. Sugar which is mixed in the tea is an intermediate good because it is used in making tea and forms a part of the tea served. Suppose the tea is priced ₹ 10 a cup, of which the value of sugar used is ₹ 2. So the price of the cup of tea includes the ₹ 2 price of the spoon of sugar. If this value of sugar is included in the GDP , it will be counted twice: as a spoon of sugar and again as a part of the cup of tea. This is “double counting” and to avoid it the intermediate goods like sugar are excluded from GDP.