Produced during a time period

In India the GDP is measured both annually and quarterly. The annual GDP is for a financial year which is from April 1st of say 2017 to March 31st 2018.

The modern concept of GDP was first developed by Simon Kuznets for a US Congress report in 1934.

1. Expenditure Approach: In this method, the GDP is measured by adding the expenditure on all the final goods and services produced in the country during a specified period. Y=C+I+G+(X−M)

2. The Income Approach: This method looks at GDP from the perspective of the earnings of the men and women who are involved in producing the goods and services. The income approach to measuring GDP (Y) is Y = wages + rent + interest + profit 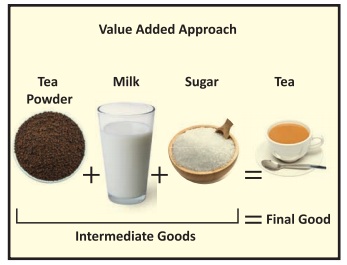 2. Problems of inflation and deflation.

3. Comparison with developed countries of the world.

2. GDP measures only quantity but not quality: In the 1970s schools and banks did not permit the use of ballpoint pens. This is because the ones available in India were of very poor quality. Since then, not only has there been a substantial increase in the quantity of ballpoint pens produced in India but their quality has also improved a lot. The improvement in quality of goods is very important but it is not captured by the GDP.

3. GDP does not tell us about the way income is distributed in the country: The GDP of a country may be growing rapidly but income may be distributed so unequally that only a small percentage of people may be benefitting from it.

4. The GDP does not tell us about the kind of life people are living: A high level of per capita real GDP can go hand-in-hand with very low health condition of people, an undemocratic political system, high pollution and suicide rate.

The Central Statistical Organisation (CSO), under the Ministry of Statistical department keeps the records. It’s processes involves conducting an annual survey of industries and compilation of various indexes like the Index of Industrial Production (IIP) Consumer Price Index (CPI) etc.