How do we find out if a particular property is true in a distributed system?

How do we find out if a particular property is true in a distributed system? For examples, we will look at: 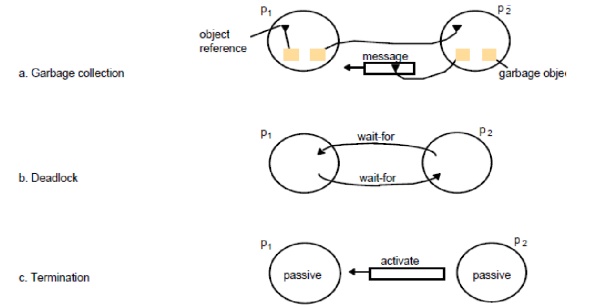 In figure 11.8a, process p2 has two objects that do not have any references to other objects, but one object does have a reference to a message in transit. It is not garbage, but the other p2 object is

A distributed deadlock occurs when each of a collection of processes waits for another process to send it a message, and there is a cycle in the graph of the waits-for relationship

In figure 11.8b, both p1 and p2 wait for a message from the other, so both are blocked and the system cannot continue

It is difficult to tell whether a distributed algorithm has terminated. It is not enough to detect whether each process has halted

In figure 11.8c, both processes are in passive mode, but there is an activation request in the network

Distributed processes are complex to debug. One of many possible problems is that consistency restraints must be evaluated for simultaneous attribute values in multiple processes at different instants of time.

All four of the distributed problems discussed in this section have particular solutions, but all of them also illustrate the need to observe global states. We will now look at a general approach to observing global states.

We can assemble meaningful global states from local states recorded at different local times in many circumstances, but must do so carefully and recognize limits to our capabilities

state of pi immediately before the kth event occurs: sik

The following figure gives an example of an inconsistent cutic and a consistent cutcc. The distinguishing characteristic is that

cutic includes the receipt of message m1 but not the sending of it, while

A consistent cut cannot violate temporal causality by implying that a result occurred before its cause, as in message m1 being received before the cut and being sent after the cut.

A Global State Predicate is a function that maps from the set of global process states to True or False.

Detecting a condition like deadlock or termination requires evaluating a Global State Predicate.

A Global State Predicate is stable: once a system enters a state where it is true, such as deadlock or termination, it remains true in all future states reachable from that state.

However, when we monitor or debug an application, we are interested in non stable predicates.

The goal of a snapshot is to record a set of process and channel states (a snapshot) for a set of processes so that, even if the combination of recorded states may not have occurred at the same time, the recorded global state is consistent

The algorithm records states locally; it does not gather global states at one site.

The snapshot algorithm has some assumptions

Neither channels nor processes fail

Reliable communications ensure every message sent is received exactly once

Messages are received in FIFO order

There is a path between any two processes

Any process may initiate a global snapshot at any time

Processes may continue to function normally during a snapshot

For each process, incoming channels are those which other processes can use to send it messages. Outgoing channels are those it uses to send messages. Each process records its state and for each incoming channel a set of messages sent to it. The process records for each channel, any messages sent after it recorded its state and before the sender recorded its own state. This approach can differentiate between states in terms of messages transmitted but not yet received

The algorithm uses special marker messages, separate from other messages, which prompt the receiver to save its own state if it has not done so and which can be used to determine which messages to include in the channel state.

The algorithm is determined by two rules

•Termination: it is assumed that all processes will have recorded their states and channel states a finite time after some process initially records its state. 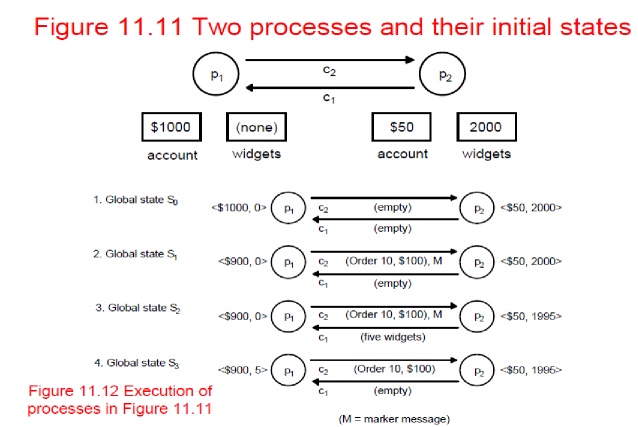 A snapshot selects a consistent cut from the history of the execution. Therefore the state recorded is consistent. This can be used in an ordering to include or exclude states that have or have not recorded their state before the cut. This allows us to distinguish events as pre-snap or post-snap events.

The reachability of a state (figure 11.13) can be used to determine stable predicates.

Fundamental issue: for a set of processes, how to coordinate their actions or to agree on one or more values?

even no fixed master-slave relationship between the components

Further issue: how to consider and deal with failures when designing algorithms

Failure assumptions of this chapter

Processes only fail by crashing unless state otherwise

Failure detector: object/code in a process that detects failures of other processes

One of two values: unsuspected or suspected

Each process sends ―alive/I‘m here‖ message to everyone else

If not receiving ―alive‖ message after timeout, it‘s suspected