– Election: choosing a unique process for a particular role – All the processes agree on the unique choice

–       Election: choosing a unique process for a particular role

–    All the processes agree on the unique choice

–    Participant: engages in an election each process pi has variable electedi = ? (don't know) initially process with the largest identifier wins.

–    The (unique) identifier could be any useful value Properties

–    turnaround time: # of messages to complete an election

o It could be unrelated to the physical configuration

o Elect the coordinator with the largest id

–    Initially, every process is a non-participant. Any process can call an election

o Marks itself as participant

o Places its id in an election message

o Sends the message to its neighbor 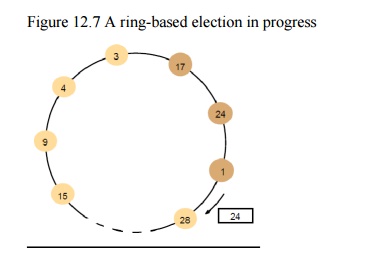 o     safety: only the process with the largest id can send an elected message

o     liveness: every process in the ring eventually participates in the election; extra elections are stopped

o   Each process knows which processes have higher identifiers, and that it can communicate with all such processes

o   Processes can crash and be detected by timeouts

o   Answer: in response to Election

o   Coordinator: announce the identity of the elected process

o   Considers it is the coordinator

o   To be a coordinator, it has to start an election

o   sends an answer message back 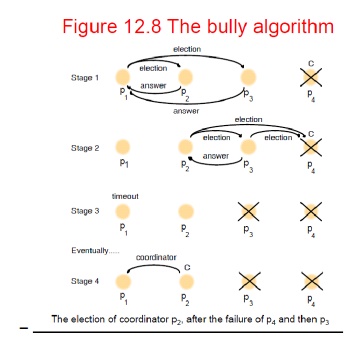 –         liveness: all processes participate and know the coordinator at the end