Race condition: several processes access and manipulate the same data concurrently and the outcome of the execution depends on the particular order in which the access take place

Process coordination in a multitasking OS

–       Race condition: several processes access and manipulate the same data concurrently and the outcome of the execution depends on the particular order in which the access take place

–       for example, locking files, locked daemon in UNIX (NFS is stateless, no file-locking at

–       client delay incurred by a process at entry and exit

–       server keeps track of a token---permission to enter critical region

–       a process requests the server for the token

–       a process can enter if it gets the token, otherwise waits

–         synchronization delay: between release and grant

o     Arrange processes in a logical ring to rotate a token

o     The ring could be unrelated to the physical configuration

o     when a process requires to enter the critical section, waits for the token

o     when a process holds the token

o     If it requires to enter the critical section, it can enter

o     when a process releases a token (exit), it sends to its neighbor

o     If it doesn‘t, just immediately forwards the token to its neighbor

–         if more than one process has state = WANTED, process with the lowest timestamp will get all 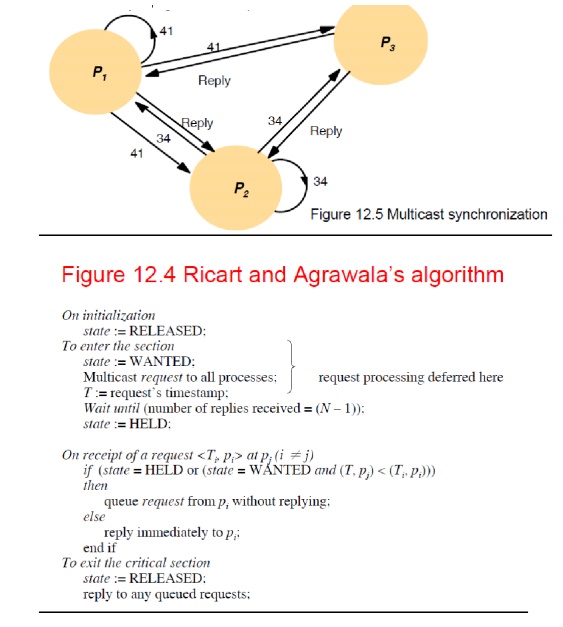 –    entry delay: delay between request and getting all replies

o   synchronization delay: delay for 1 message (one last reply from the previous holder)

–    Only obtain permission from subsets, overlapped by any two processes

–    subset |Vi|=K, to be fair, each process should have the same size

–    Simple way (2√N): place processes in a √N by √N matrix and let Vi be the union of the row and column containing Pi

–    If P1, P2 and P3 concurrently request entry to the critical section, then its possible that each process has received one (itself) out of two replies, and none can proceed 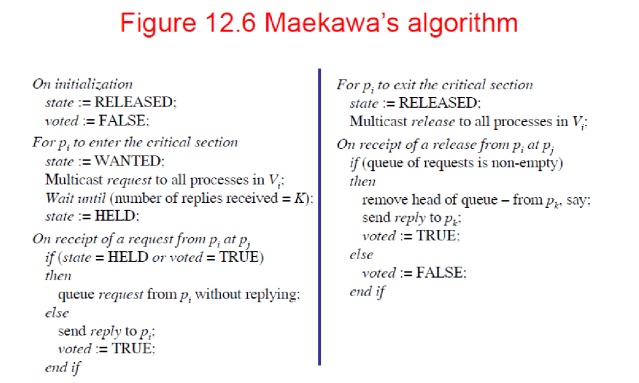