ASD has a relatively low prevalence of approximately two per 1000, yet the recurrence risk to siblings is 4 to 5%. 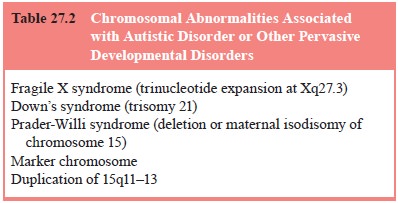 ASD is currently thought to be a complex genetic disor-der. The varying strength of the contributions of different loci is likely also to be responsible for the genetic heterogeneity that characterizes ASD. In ASD, findings so far suggest a disease process with greater than 10, and perhaps as many as 100 loci.

Linkage studies have shown evidence of linkage in sev-eral polymorphisms in the area of chromosome 15 noted above, including the gamma-aminobutyric acid receptor subunit gene (GABRB3) and transmission disequilibrium for markers in GABRB3 has also been found. Most recently, evidence of trans-mission disequilibrium was found to peak at another region of the serotonin transporter gene, supporting evidence of involvement of the gene, but not specifically the 5HTTLPRvariant (Kim et al., 2002).

There has been significant progress in terms of identify-ing the genetic basis of Rett’s syndrome. Mutations in the gene (MECP2) encoding X-linked methyl-CpG-binding protein 2 (MeCP2) have been identified as the cause of more than 80% of classic cases of Rett’s syndrome.