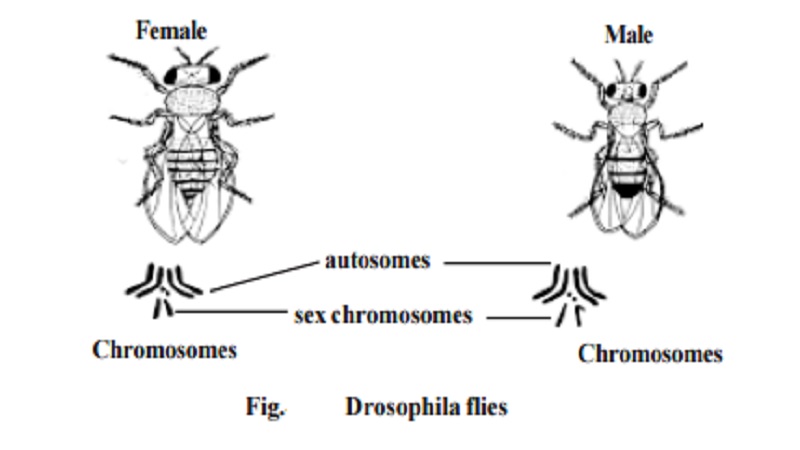 Thus in human beings, the presence of Y chromosome deter-mines maleness and its absence determines femaleness. Evidences to estab-lish this viewpoint had been provided by certain abnormal conditions called syndromes.

1.   Turner's syndrome (XO Females) : In this abnormality the females are sterile and have short stature. They have webbed neck, broad shield-shaped chest, low intelligence, under developed breasts and poorly developed ova-ries. These conditions result due to the presence of 44 autosomes and only one X chromosome in her body cells. This abnormality is known as Turner's syndrome.

2.   Klinefelter's syndrome :- This syndrome is caused due to the presence of an extra X chromosome in males. This happens when an abnormal egg with XX chromosome is fertilized by a sperm carrying Y chromosome. The zygote will have three sex chromosomes (XXY). The resulting young one is an ab-normal sterile male. The symptoms of this syndrome are the presence of small testicles, mental retardation, longer arms and high pitched voice.

4.   XYY males :- Such males will have an extra Y chromosome (XYY). This condition results in mental retardation and criminal attitudes.

Further studies on sex determination showed that sex determination was not the inheritance of genes by the sex chromosomes alone. Studies on intersex and supersexindicated the operation of still more a complex mecha-nism for the determination of sex. Thus the genic balance mechanism of sex was discovered. It was first described by C.B Bridges in 1921.

In Drosophila it was discovered that the sex of an individual depends upon the ratio of x chromosomes to the autosomes. For sex determination, each haploid set of autosomes carry factors with a male determining value equal to one (1). Each x chromosome carries factors with a female determin-ing value of one and a half (1 .5 ). Hence in a normal male (AAXY), the male female determinants are in the ratio of 2 : 1.5('A' represents a haploid set of autosomes). Thus the genic balance is in favour of maleness. A normal female (AAXX) has the male female determination ratio of 2:3. Therefore the bal-ance is in favour of femaleness.