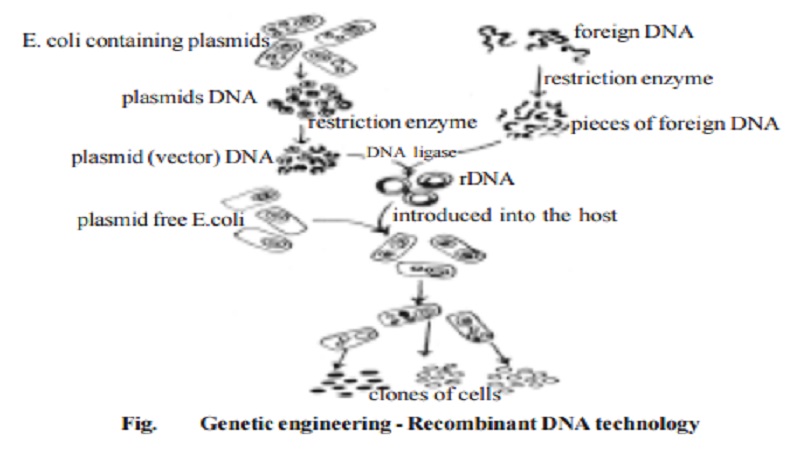 All living organisms are endowed with specific genetic information. With advancement that progressed in genetical science, many aspects of gene functions became obvious.

All living organisms are endowed with specific genetic information. With advancement that progressed in genetical science, many aspects of gene functions became obvious. The molecular functioning of genes revealed the central dogma that DNA in a eukaryotic cell undergoes tran-scription to synthesize RNA and the latter undergoes translation to produce protein (polypeptide). Even before the modern aspects of molecular genetics are discovered, the existence of mobile genetic elements (Transposons) were visualized by the geneticist Barbara Meclintock in her work on maize plant Zea mays in 1965.

Genetic engineering deals with the manipulation of genes according to human will. A gene of known function can be transferred from its normal location into an entirely different cell or organism, via a suitable carrier or vector. The carrier may be a plasmid DNA segment of a bacterium or a virus. The gene transferred likewise starts functioning to synthesize the particular protein in the new environment. Thus, the fact that, a gene can function irrespective of its environment formed the basis for genetic engineering.

Genetic engineering which involves isolation of a gene segment from the whole genome, cloning of the gene into multiple copies and their expression needs several biological tools. Some of them are given below.

2. Foreign DNA / Passenger DNA : It is a fragment of DNA molecule, which is to be enzymatically isolated and cloned.

3.Cloning vectors : Vectors or vehicle DNA are those DNA that can carry a foreign DNA fragment when inserted into it. The vectors generally used are bacterial plasmids and bacteriophages.

A plasmid is a circular DNA with about 200-300 nucleotides. It is present in bacterial cells alongside their main chromosomes. A plasmid sometimes can leave from one bacterial cell and enter another, through, conjugation and thereby transfer genetic traits to the recepient cell. The plasmid DNA inside a bacterium can replicate independently of the main DNA and can depart from main genome dragging a piece of main DNA along with it. It is called the bacterial DNA. A plasmid can sometimes fuse with the main DNA. Thus the plasmid seems to be an efficient gene exchanging vehicle which the nature has produced.

In recombinant DNA technology, restriction endonucleases cut the DNA double helix in very precise manner. They recognize specific base sequences on DNA. They cut each strand of DNA at a given place. These enzymes recognize specific DNA sequences which are called palindrome sequences. A palindrome refers to a base sequence that read the same on the two strands but in opposite directions. For example if the base sequence on one strand in GAATTC read in 5'-3' direction, the sequence on the opposite (complementary) strand is CTTAAG read in 3'-5' direction. There is a point of symmetry within the palindrome. In the example given this point is in the center between the AT/TA.

The foreign DNA fragment isolated is made to recombine with the plasmid DNA which is cleaved by the same restriction endonuclease. The recombination of the two DNAs is effected by the DNA ligase enzyme. The product formed is called recombinant plasmid or recombinant DNA.

The recombinant DNA must be introduced into a host cell, within which it may replicate freely. Escherechia coli has been employed as a suitable host to the above. Alongside, with the multiplication and growth of the bacterium in the medium, copies of rDNA are also produced. In molecular cloning, besides E.coli other microbes that have been employed include Bacillus subtilis, Strptomyces sp., Saccharomyces cerevisieae etc.

When the rDNA copies are introduced into the host cells, (E. coli) a few thousand of rDNA pieces may enter the cells. These cells are called transformed cells. Each transformed cell grows a colony of its own in which every member is genetically alike. These colonies are then distinguished and recultured separately.

From the recultured colonies, the recombinant DNA is extracted from lysed cells, purified and used. The first gene was cloned in 1973 by Hebert Bayer and Stanely cohen of Stanford University, California of USA.

1. Genetic engineering/recombinant DNA technology has enabled the understanding of structure of eukaryotic genes and their components.

3.                Through recombinant DNA technology, the genotypes of plants are al-tered. New transgenic plants which are resistant to diseases and pest attack have been produced.

5.                Genetically engineered bacteria are called superbugs. Superbugs can de-grade several aromatic hydrocarbons, at the same time. They are employed in clearing oil spills in the ocean. Thus these are used in pollution abatement. The super bug was produced first by an Indian researcher Anand Chakrabarthy in USA. He developed a strain of Pseudomonas bacterium to clear up oil spills. The above superbug can destroy octanes, xylenes cam-phors and toluenes.

DNA segmenting in genetic engineering refers to fragmenting of DNA and sequencing or mapping the DNA in terms of its nucleotide sequences. Chemical and enzymatic methods are available for the above. As a result the genic and non-compartments of DNA can be identified.

In human beings, more than three hundred hereditary diseases have been indentified. All these diseases have genetic background. Gene mutations, chromosomal aberrations are the attributed reasons for the manifestation of such genetic diseases in man. Most of them are congenital in nature.

Pedigree chart : Pedigree chart defines the history of a character in a family. It is drawn up using certain standard symbols. It is also called as the Family tree. Pedigree chart helps to identify and visualize the course of genetic dis-eases in the progeny. This is especially true of diseases such as fibrosis and phenylketonuria (PKU).