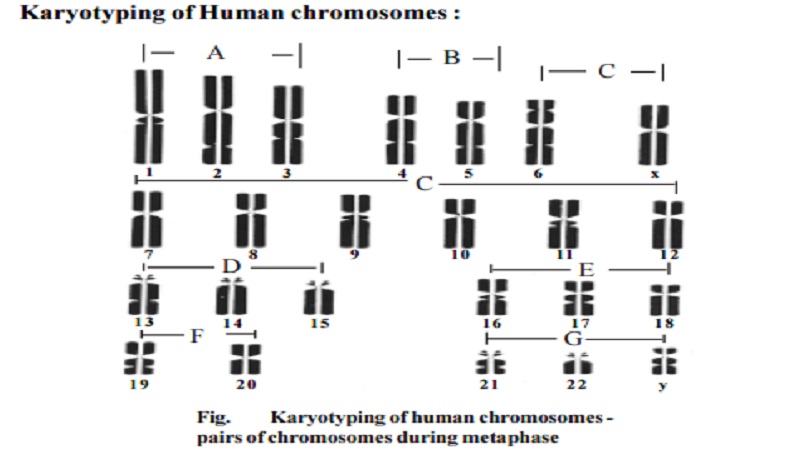 The karyological studies are usually made during mitosis, though the chromosome structure and details can also be best done in meiotic preparations. It is much easier to obtain and prepare suitable mitotic cells. Mitosis also reveals the replicated chromosomes viz., sister chromatids. The diploid set of chromosomes in the eukaryotic cells has constant morphological (phenotypic) features such as number, size, shape. The chromosomes are identified by other features such as the secondary constriction, arm ratio, and banding pattern. The summation of all such characters, which identify a set of chromosomes is called karyotyping.

Karyotyping involves the culture of foetal cells found in the amniotic fluid, in vitro, in a highly nutritive solution containing phytohaemag-glutinin. The foetal cells are cultured with colchicine. Colchicine stops mitosis at metaphase. When these cells are subjected to a hypotonic solution, the cells swell because the soluble salts are of lower concentration than in normal protoplasm. The water diffuses into the cell and separates the chromosomes. The scattered chromosomes are then placed on a slide, stained and photographed under a microscope. Individual chromosomes are then cut off from the photograph and marked as homologous pairs to form an idiogram.

The 23 pairs of chromosomes in human are classified into seven groups viz, A-G based on position of centromere.

Group A : This group includes the largest chromosomes 1,2 and 3. These are metacentric with centromere found in center with two equal arms.

Group B : This group represents chromosomes 4 and 5 which are submetacentric with two unequal arms.

Group C : This is the largest group containing chromosomes 6,7,8,9,10,11,12 and X. These are of medium size and submetacentric. The X chromosome resembles the chromosome 6 in this group.

GroupD : These are medium sized chromosomes with nearly (acrocentric) terminal centromeres. The chromosomes 13,14 and 15 are kept in this group.

Group E : It consists of chromosomes 16,17 and 18. They are shorter and meta or submetacentric.

Group G : This group comprises the very short acrocentric chromosomes 21, 22 and Y belong to this category.

1. Karyotyping helps to identify the sex of individuals through amniocentesis.

2. Genetic diseases in human beings can be detected by this technique. If a disease is detected, the medical councelling for termination of pregnancy and abortion of such foetus can be done.

3. By characterizing the normal karyotype, the chromosomal abnormalities such as deletion, duplication, translocation, non-disjunctions and the consequent aneuploids could be detected.

Genetics deals with various concepts and phenomena related to inheritance. Mendel's findings sowed the seeds for understanding the secrets of heredity and paved the way for further knowledge on genes and chromosomes. The post Mendelian period was remarkable in that many new concepts and hypotheses related to general genetics such as factor (gene) interactions, sex determination, linkage, sex linkage, crossing over, cytoplasmic inheritance, multiple allelism polygenic inheritance were added. The discovery of double helical DNA by Watson and Crick in 1953 has unraveled the secrets of gene functions. The voluminous works on Drosophila and prokaryotes like Escherichia coli opened up a new era of modern (molecular) genetics. In modern genetics, human genetics constitutes a part. It attempts to bring informations most important for understanding the genetics of man who is also a species like any other taxonomic species. Human genetics involves the identification of human chromosomes; genetic engineering prospects; genetic diseases and gene therapy; cloning devices; transgenic or genetically modified organisms etc. Towards this line, the modern genetics also deals with the human genome project; bioinformatics / biological data base and proteomics.