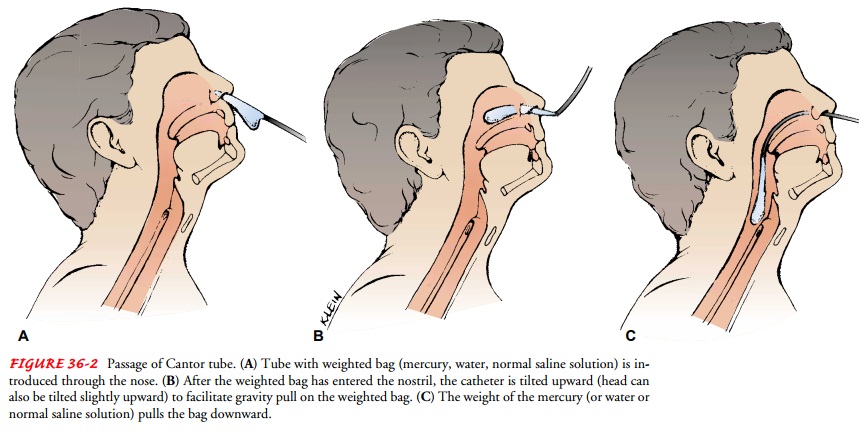 GI intubation is the insertion of a rubber or plastic tube into the stomach, the duodenum (first section of the small intestine), or the intestine.

GI intubation is the insertion of a rubber or plastic tube into the stomach, the duodenum (first section of the small intestine), or the intestine. The tube may be inserted through the mouth, the nose, or the abdominal wall. The tubes can be short, medium, or long, depending on their intended use; nasogastric (NG) tubes are short, nasoduodenal tubes are of medium length, and naso-enteric tubes are long. GI intubation may be performed for the following reasons:

•        To decompress the stomach and remove gas and fluid

•        To lavage the stomach and remove ingested toxins

•        To diagnose disorders of GI motility and other disorders

•        To administer medications and feedings

•        To aspirate gastric contents for analysis

A variety of tubes are used for decompression, aspiration, and lavage. The Sengstaken-Blakemore tube is a type of NG tube used to treat bleeding esophageal varices. Orogastric tubes are large-bore tubes with wide proximal outlets for removal of particles of ingested substances (eg, pills); they are primarily used in emergency departments. Various other tubes are used to ad-minister feedings and medications. The tubes are made of various materials (rubber, polyurethane, silicone), and they vary in length (90 cm to 3 m [3 to 10 ft]), in size (6 to 18 French [Fr]), in pur-pose, and in placement in the GI tract (stomach, duodenum, je-junum) (Table 36-1). Any solution administered through a tube is either poured through a syringe or delivered by a drip mechanism regulated by gravity or by an electric pump. Aspiration (suctioning) to remove gas and fluids is accomplished with the use of a syringe, an electric suction machine, or a wall suction outlet. 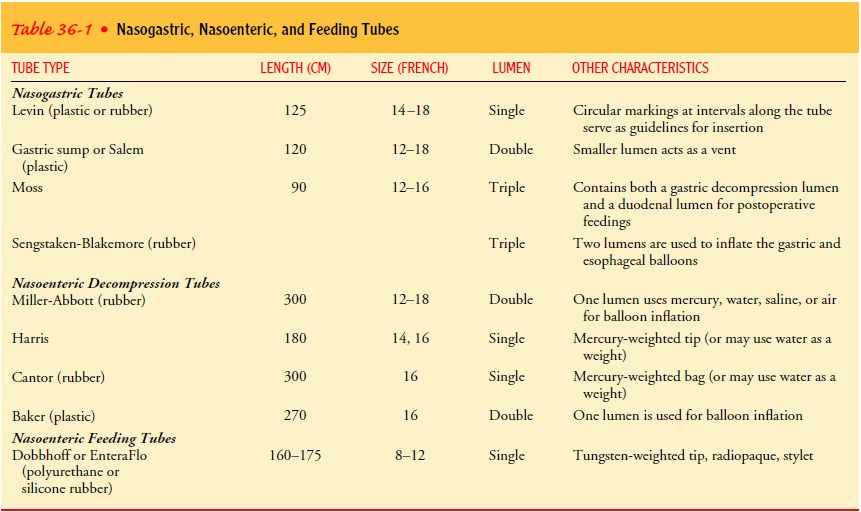 An NG tube or short tube is introduced through the nose into the stomach, often before or during esophageal or stomach surgery. Commonly used short tubes include the Levin tube and the gas-tric sump tube. Short tubes are used in adults primarily to remove fluid and gas from the upper GI tract or to obtain a specimen of gastric contents for laboratory studies. They are occasionally used for the short-term (3 to 4 weeks) administration of medications or feedings.

The Levin tube has a single lumen (the hollow part of the tube), ranges from 14 to 18 Fr in size, and is made of plastic or rubber with openings near its tip. It is 125 cm (50 in) long. Circular markings at specific points on the tube serve as guides for inser-tion. A marking is made on the tube to indicate the midpoint. The tube is advanced cautiously until this marking reaches the patient’s nostril, suggesting that the tube is in the stomach. Place-ment is checked by observing the characteristics of the aspirate and by testing the pH (which varies according to the source of the aspirate). Seeing the tube on an x-ray study is the only sure way to verify its location. The Levin tube is connected to low in-termittent suction (30 to 40 mm Hg). Intermittent suction is used to avoid erosion or tearing of the stomach lining, which can result from constant adherence of the tube’s lumen to the mu-cosal lining of the stomach.

The gastric sump (Salem) tube is a radiopaque, clear plastic, double-lumen NG tube used to decompress the stomach and keep it empty. It is 120 cm (48 in) long and is passed into the stomach in the same way as the Levin tube. The inner, smaller tube vents the larger suction-drainage tube to the atmosphere by means of an opening at the distal end of the tube. The sump tube can pro-tect gastric suture lines because, when used properly, it maintains the force of suction at the drainage openings, or outlets, at less than 25 mm Hg, the level of capillary fragility. The small vent tube (known as the blue pigtail) controls this action. These tubes are connected to low continuous suction. The suction lumen is irrigated as prescribed to maintain patency.

Medium-length nasoenteric tubes are used for feeding. Feeding tubes placed in the duodenum are 160 cm (60 in) long; feeding tubes placed in the jejunum (portion of the small intestine adja-cent to the duodenum) are 175 cm (66 in) long. They can be in-serted at the time of surgery or before surgery, by interventional radiologists assisted by fluoroscopy or at the bedside. If the tube is inserted at the bedside, placement is verified by radiography.

After insertion, the tip of the tube will initially be in the stomach; it usually takes 24 hours for the tube to pass through the stom-ach and into the intestines.

Polyurethane or silicone rubber feeding tubes have narrow di-ameters (6 to 12 Fr) and tungsten tips (rather than mercury-filled bags); some have a water-activated lubricant that makes it easier to insert the tube. The tubing may kink when a stylet is not used, particularly if the patient is uncooperative or unable to swallow. Feeding tubes with a stylet are inserted with caution in patients who are predisposed to esophageal puncture, such as elderly and frail patients with thin tissues. These tubes are ad-vanced in the same way as an NG tube; that is, with the patient in Fowler’s position. If this is not feasible, the patient is placed on the right side.

A long nasoenteric tube is introduced through the nose and passed through the esophagus and stomach into the intestinal tract. It is used to aspirate intestinal contents so that gas and fluid do not distend the intestine; this is called decompression. Three major nasoenteric tubes used for aspiration and decompression are the Miller-Abbott tube, the Harris tube, and the Cantor tube. These tubes are used to relieve obstruction of the small in-testine. They are also used prophylactically; they may be inserted the night before GI surgery to prevent postoperative obstruction.

Because peristalsis is either stopped or slowed for 24 to 48 hours after surgery as a result of anesthesia and visceral ma-nipulation, NG or nasoenteric suction is used to evacuate fluids and flatus so that vomiting is prevented, tension is reduced along the incision line, and obstruction is prevented. Usually, the tube remains in place until peristalsis returns, as evidenced by the re-sumption of bowel sounds and the passage of flatus.

The Miller-Abbott tube is a double-lumen rubber tube that is 300 cm (10 ft) long and 12, 14, 16, or 18 Fr in size. One lumen is used to introduce mercury, water, or saline into the balloon at the end of the tube for weighting of the tube; the other lumen is used for aspiration. Before the tube is inserted, the balloon should be tested and its capacity measured; then it should be deflated completely. The tube should be lubricated sparingly and chilled well (chilling causes the tube to become stiff and facilitates its passage) before the tip is inserted through the patient’s nose. Markings on the tube indicate the distance it has been passed. Before removal, the bal-loon at the end of the lumen must be completely deflated.

The Harris tube is a single-lumen (14 Fr), mercury-weighted tube of about 180 cm (6 ft). This tube has a metal tip that is lubricated and introduced through the nose. The mercury-weighted bag follows. The weight of the mercury promotes the passage of the bag by gravity. This tube is used solely for suction and irrigation. Usually, a Y-tube is attached to the end of the Harris tube. The suction is applied to one side of the Y and the other side is clamped, except when irrigation of the tube is being performed.

The Cantor tube is 300 cm (10 ft) long and has a 16-Fr lumen. Its distinguishing feature is that it is larger than the other long tubes. It has a 4- or 5-mL bag at the extreme end of the rubber tubing; mercury, water or saline is introduced into this bag to weight the tube. Before the tube is inserted, the bag is wrapped around the tube. After the tube is lubricated, it is advanced through the nose and into the esophagus (Fig. 36-2). The patient assumes a sitting position and may be offered sips of water to facilitate pas-sage of the tube. Fluoroscopy helps to verify that the tube has passed into the duodenum.