Fungi are a group of eukaryotic organisms that lack chlorophyll. They grow in dark environments.

Fungi are a group of eukaryotic organisms that lack chlorophyll. They grow in dark environments. They may be either unicellular (Eg. Yeast) or multicellular (Eg. Penicillium). They are found in all kinds of habitats. They are included under kingdom Fungi. The study of fungi is called mycology. Some fungi are macroscopic (Eg. Mushroom). There are around 70,000 species of fungi, living in the world.

Yeasts are found freely in the atmosphere. Yeast grows in all kinds of media containing sugar. The cell is ovoid in shape, containing cell wall and a nucleus. The cytoplasm is granular, and has vacuoles, organelles and glycogen an oil globules. Yeast aids in fermentation with the help of the enzyme zymase. It respires anaerobically and reproduces by budding. 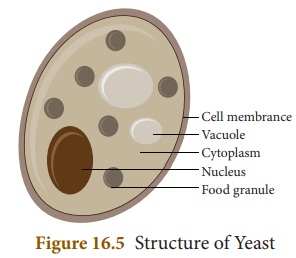