Algae are very simple plant like eukaryotic organisms. They are found in moist habitats.

Algae are very simple plant like eukaryotic organisms. They are found in moist habitats. They are rich in chlorophyll and can be seen as thin film on the surface of lakes and ponds. Therefore they are known as ‘grass of water’. They are autotrophic and they produce their own food with the help of chloroplast. Chloroplast contain chlorophyll (green pigments) for photosynthesis. The study of algae is called algology (phycology). 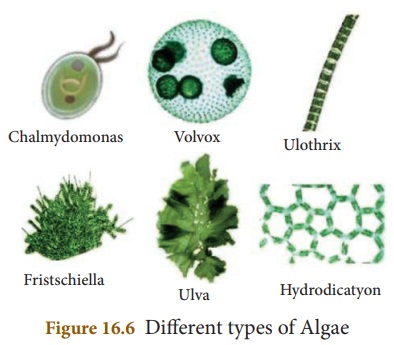 Chlamydomonas is a simple, unicellular, motile fresh water algae. They are oval, spherical or pyriform in shape. The pyriform (pear shape) is a common one found in ponds, ditches and water tanks. They have a narrow anterior end and a broad posterior end.

The cell is surrounded by a thin and firm cell wall made of cellulose. The cytoplasm is seen in between the cell membrane and the chloroplast. 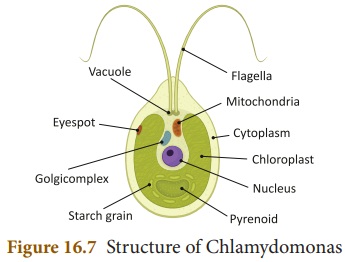 The cell contains large dark nucleus lying inside the cavity of the cup shaped chloroplast. The anterior part of the cell bears two flagella which helps in locomotion. Two contractile vacuoles are seen at the base of each flagellum. The anterior side of the chloroplast contains a tiny red coloured eyespot. Chlamydomonas exhibits sexual and asexual modes of reproduction.