Bacteria are single-celled prokaryotes (cells without nuclei). They are considered to be the first living organisms on earth. Bacteria are grouped under the kingdom Monera.

Bacteria are single-celled prokaryotes (cells without nuclei). They are considered to be the first living organisms on earth. Bacteria are grouped under the kingdom Monera. The study of bacteria is called bacteriology. The size of bacteria ranges from 1µm to 5µm (micrometer). Bacteria are of two types based on respiration. They are:

* Anaerobic bacteria (does not require oxygen).

A bacterium has an outer covering known as the cell wall. Nuclear material is represented by a nucleoid without nuclear membrane. An extra chromosomal DNA called plasmid is present in the cytoplasm. Protein synthesis is carried out by 70S ribosomes. Other cell organelles (mitochondria, golgi body, endoplasmic reticulum etc. ,) are absent. Flagella aids in locomotion. 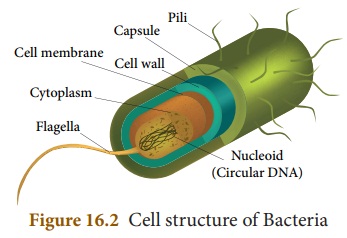 Bacteria are classified according to the shape of their cells. They are:

* Cocci: Spherical or ball shaped bacteria. They can stick together in pairs (diplococcus) or form a chain (streptococcus) or occur in bunches (staphylococcus). 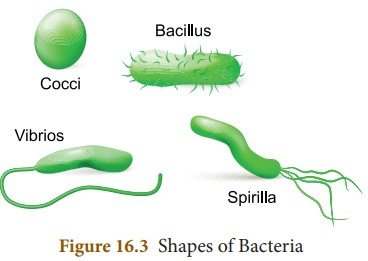 Bacteria are also classified according to the number and arrangement of flagella. They are as follows.

* Lophotrichous: Tuft of flagella at one end. Eg. Pseudomonas.

* Amphitrichous: Tuft of flagella at both ends. Eg. Rhodospirillum rubrum.

* Peritrichous: Flagella all around. Eg. E.coli. 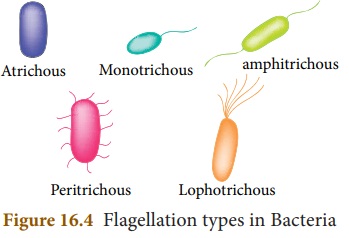 Bacteria get their food in many ways. Photosynthetic bacteria make their own food (Eg. Cyanobacteria) . Bacteria that live in harsh environment use chemicals (Ammonia, Hydrogen sulphide) to produce their food instead of utilizing energy from the sun. This process is called chemosynthesis. Some bacteria exhibit symbiotic relationship (Eg. E.coli lives in the intestine of man). Bacteria reproduces by fission (Binary and multiple fission).

Take one or two drops of butter milk on a slide and spread it. Heat the slide slightly on a lamp ( 3 – 4 seconds). Add a few drops of crystal violet and leave it for 30 to 60 seconds. Then wash the slide gently with water. Observe the slide under the compound microscope.