Let us see another simple example. We know that the equation 2x−y = 0 describes a straight line. Here whenever x assumes a value, y assumes some value accordingly. The movement or functioning of y is decided by that of x. Let us denote y by f(x). We may see many situation like this in nature. In the study of natural phenomena, we find that it is necessary to consider the variation of one quantity depending on the variation of another.

The relation of the time and the position of the particle, the relation of a point in the x-axis to a point in the y-axis and many more such relations are studied for a very long period in the name function. Before Cantor, the term function is defined as a rule which associates a variable with another variable. After the development of the concept of sets, a function is defined as a rule that associates for every element in a set A, a unique element in a set B. However the terms rule and associate are not properly defined mathematical terminologies. In modern mathematics every term we use has to be defined properly. So a definition for function is given using relations.

A student a is related to a mark b if a got b marks in the test.

We observe the following from this example:

Relations having the above two properties form a very important class of relations, called functions.

Let us now have a rigorous definition of a function through relations.

Two functions f and g are said to be equal functions if their domains are same and f(a) = g(a) for all a in the domain.

The range of a function is the collection of all elements in the co-domain which have pre-images. Clearly the range of a function is a subset of the co-domain. Further the first condition says that every element in the domain must have an image; this is the reason for defining the domain of a relation R from a set A to a set B as the set of all elements of A having images and not as A. The second condition says that an element in the domain cannot have two or more images.

Naturally one may have the following doubts:

As an element in the domain has exactly one image and an element in the co-domain can have more than one pre-image according to the definition, we use the definite article “the” for image of a and the indefinite article “a” for pre-image of b. There are no conditions as asked in the other two questions; the reason behind it can be understood from the problem of students’ mark we considered above.

We observe that every function is a relation but a relation need not be a function.

Clearly (i) and (ii) are functions whereas (iii) is not a function, if the domain and the co-domain are R. In (iii) for the same x, we have two y values which contradict the definition of the function. But if we split into two relations, that is, y = √x and y = −√x then both become functions with same domain non-negative real numbers and the co-domains [0, ∞) and (−∞, 0] respectively.

(a) Tabular Representation of a Function

(b) Graphical Representation of a Function

(c) Analytical Representation of a Function

That is, a series of symbols denoting certain mathematical operations that are performed in a definite sequence on numbers, letters which designate constants or variable quantities.

Examples of functions defined analytically are

One of the usages of writing functions analytically is finding domains naturally. That is, the set of values of x for which the analytical expressions on the right-hand side has a definite value is the natural domain of definition of a function represented analytically.

Thus, the natural domain of the function, 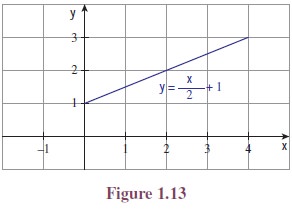 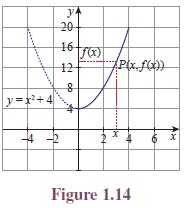 Let x be a point in the domain. Let us draw a vertical line through the point x. Let it meet the curve at P . The point at which the horizontal line drawn through P meets the y-axis is f(x). Similarly using horizontal lines through a point y in the co-domain, we can find the pre-images of y.

Can we say that any curve drawn on the plane be considered as a function from a subset of R to R? No, we cannot. There is a simple test to find this.

“if the vertical line through a point x in the domain meets the curve at more than one point or does not meet the curve, then the curve will not represent a function”.

Testing whether a given curve represents a function or not by drawing vertical lines is called vertical line test or simply vertical test.

The third curve y2 = x in Illustration 1.2 fails in the vertical line test and hence it is not a function from R to R.

Some frequently used functions are known by names. Let us list some of them. 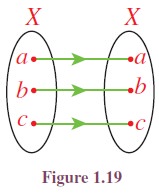 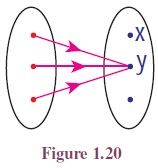 The value of a constant function is same for all values of x throughout the domain. 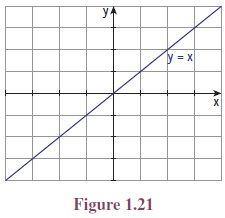 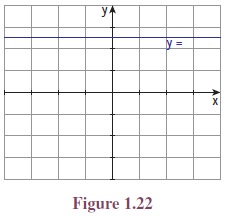 Let us recall that |x| is defined as 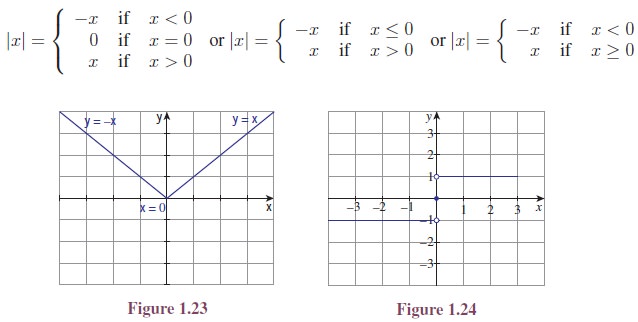 One may note the relations among the names of these functions, the symbols denoting the functions and the commonly used words ceiling and floor of a room and their graphs are given in Figures 1.25 and 1.26.

Though functions can be classified into various types according to the need, we are going to concentrate on two basic types: one-to-one functions and onto functions.

Let us look at the two simple functions given in Figure 1.27 and Figure 1.28. In the first function two elements of the domain, b and c, are mapped into the same element y, whereas it is not the case in the Figure 1.28. Functions like the second one are examples of one-to-one functions.

To prove a function f : A → B to be one-to-one, it is enough to prove any one of the following:

It is easy to observe that every identity function is one-to-one function as well as onto. A constant function is not onto unless the co-domain contains only one element. The following statements are some important simple results.

Let A and B be two sets with m and n elements. 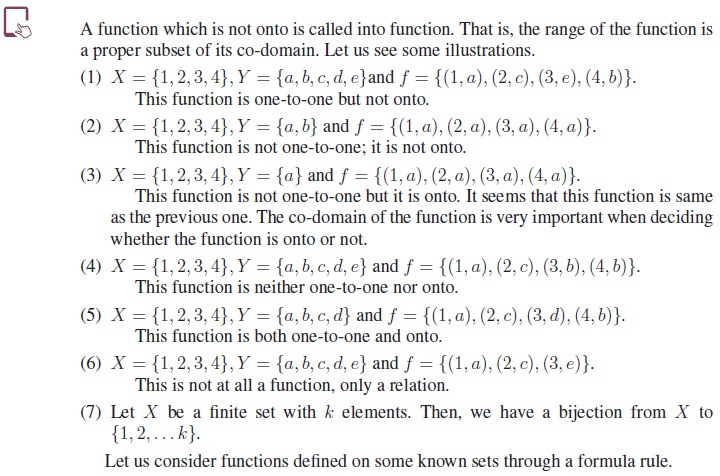 Now, we recall Illustration 1.1. In this illustration the function f : C → D is defined by 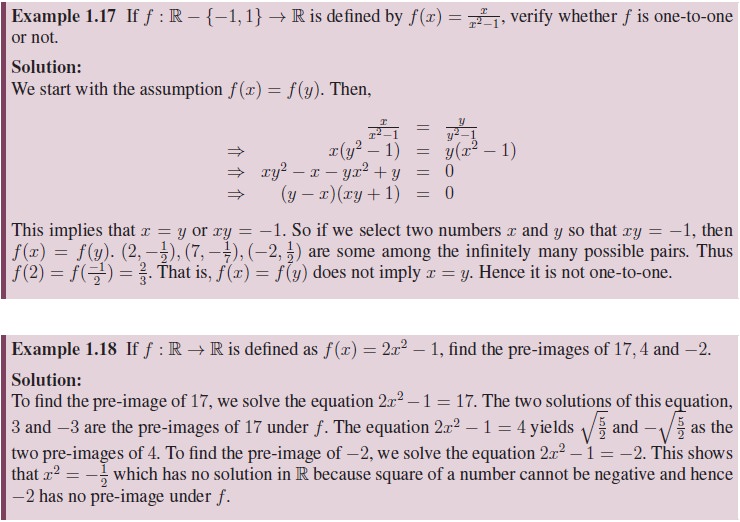 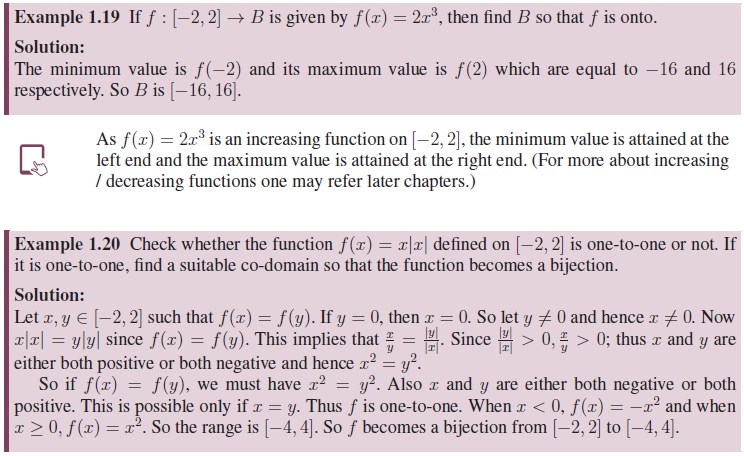 Similar to the vertical line test we have a test called horizontal test to check whether a function is one-to-one, onto or not. Let a function be given as a curve in the plane. If the horizontal line through a point y in the co-domain meets the curve at some points, then the x-coordinate of all the points give pre-images for y.

(i) If the horizontal line through a point y in the co-domain does not meet the curve, then there will be no pre-image for y and hence the function is not onto.

(ii) If the horizontal line through atleast one point meets the curve at more than one point, then the function is not one-to-one.

(iii) If for all y in the range the horizontal line through y meets the curve at only one point, then the function is one-to-one.

So we may say, the function represented by a curve is one-to-one if and only if for all y in the range, the horizontal line through the point y meets the curve at exactly one point.

The function represented by a curve is onto if and only if for all y in the co-domain, the horizontal line through the point y meets the curve atleast one point.

Further by seeing the diagrams in Illustration 1.2 and Figures 1.5 to Figure 1.7, the function 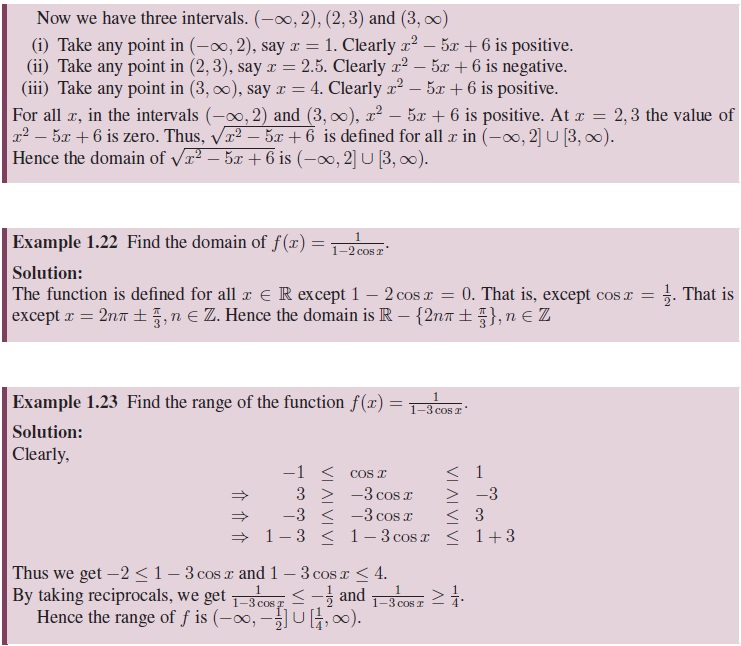 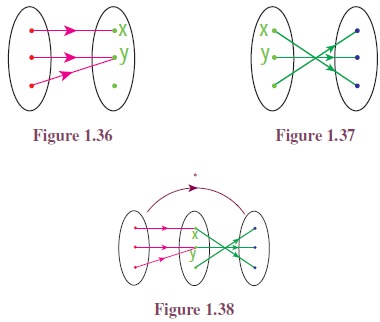 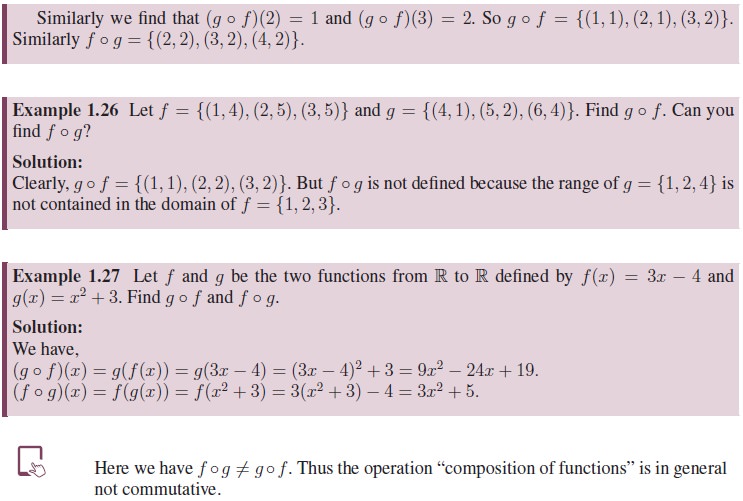 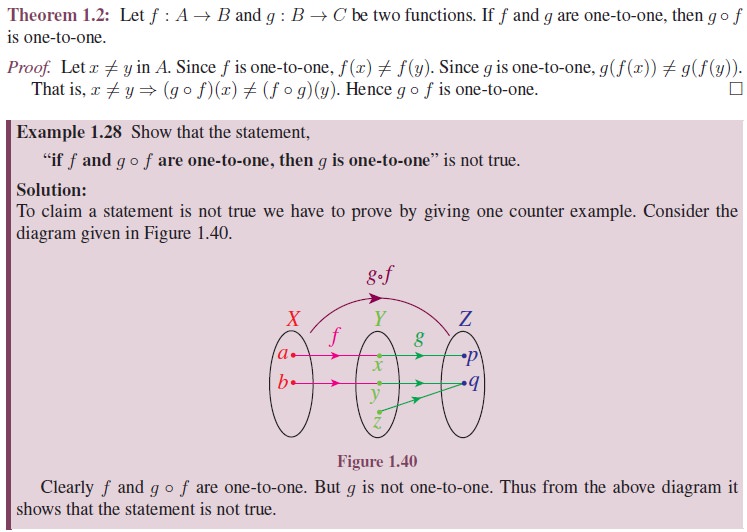 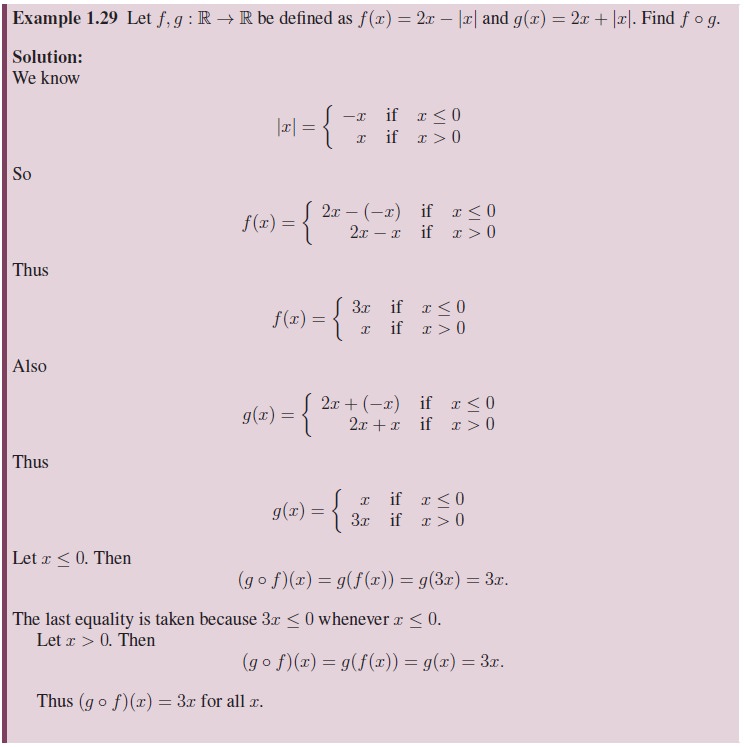 5. Inverse of a Function

If we look this function in a mirror, we get a function from Y to X. Let us call that function as g.

If a function f has an inverse, then we say that f is invertible. There is a nice relationship between composition of functions and inverse.

Using the discussions above, the terms invertible and inverse can be defined in some other way as follows:

We may use this concept to prove some functions are bijective.

If f is a bijection, then f−1(y) is nothing but the pre-image of y under f. Let us note that the inverses are defined only for bijections. If f is not one-to-one , then there exists a and b such that a ¹ b and f(a) = f(b). Let this value be y. Then we cannot define f−1(y) because both a and b are pre-images of y under f, as f−1 cannot assume two different values for y. If f is not onto, then there will be a y in Y without a pre-image. In this case also we cannot assign any value to f−1(y).

Working Rule to Find the Inverse of Functions from R to R:

A function whose co-domain is R or a subset of R is called a real valued function. We can discuss many more operations on functions if it is real valued.

Let f and g be two real valued functions. Can we define addition of f and g? Naturally we expect the sum of two functions to be a function. The value of f + g at a point x should be related to the values of f and g at x. So to define f + g at a point x, we must know both f(x) and g(x). In other words x must be in the domain of f as well as in the domain of g. And the natural way of defining + g at x is f(x) + g(x). So if we impose a condition that the domains of f and g to be the same, then we can define f + g. In the same way we can define subtraction, multiplication and many more algebraic operations available on the set R of the real numbers.

Note that the domain may be any set, not necessarily a set of numbers. For example if X is a set of students of a class, f and g functions representing the marks obtained by the students in two tests, then the function f + g represent the total marks of the students in the two tests. It is easy to see that the operations addition, subtraction, multiplication and division defined above satisfy the following properties.

We can list many more properties of these operations. The proofs are simple; however let us prove only one to show a way in which these properties can be proved.

Proof. Let X be any set and f and g be real-valued functions defined on X. Let x ∈ X. 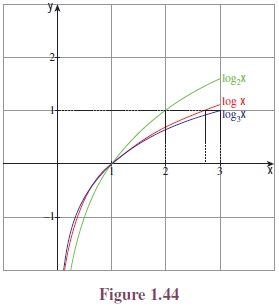 We can prove the following results.

vi.            The only function which is both odd and even function is the zero function.

Let us prove one of the above properties. The other properties can be proved similarly.

Proof. Let f be an odd function and g be an even function. Let h = f g. Now 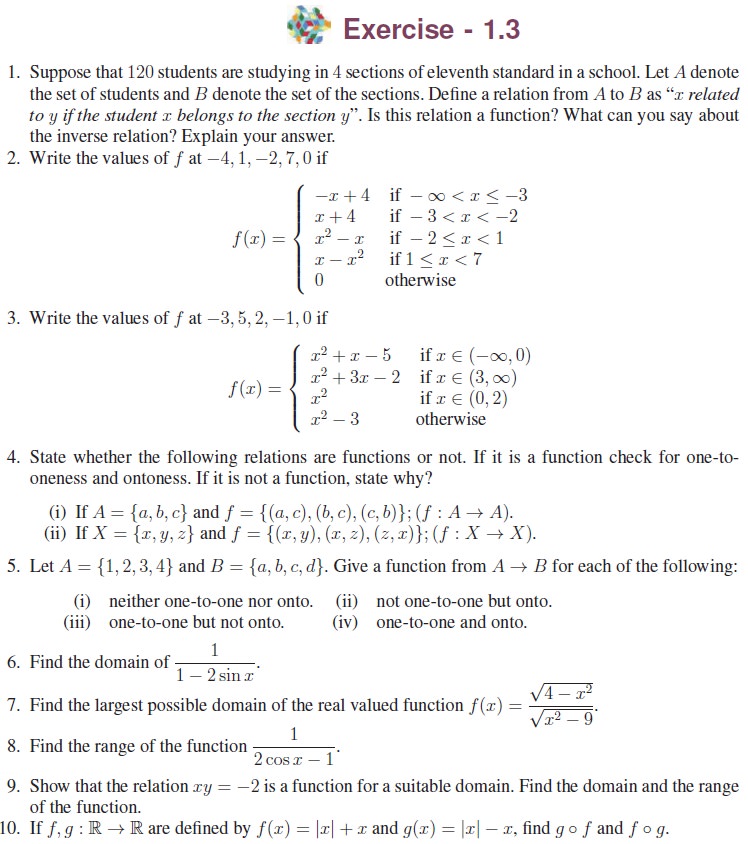 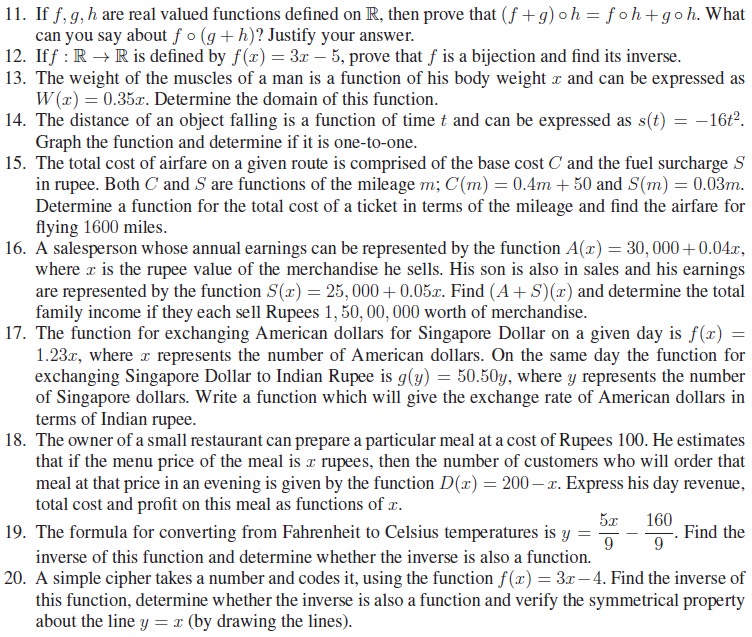