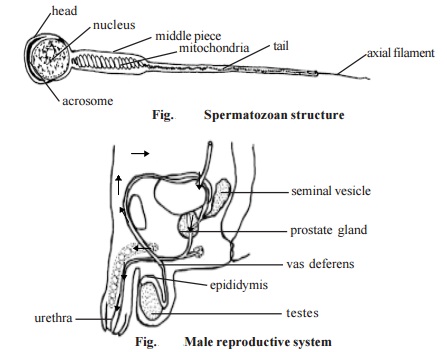 The central role of the male reproductive system is carried out by the testes, which produce sex cells called spermatozoa or sperms containing genetic material.

The central role of the male reproductive system is carried out by the testes, which produce sex cells called spermatozoa or sperms containing genetic material. The testes produce sperms continuously from puberty onward. Men remain fertile for a much longer period than women. In addition, the testes manufactures male sex hormones or androgens which influence sperm production, fertility and sex drive. Male sex hormones also promote the secondary sexual characters.

Factors controlling spermatogenesis: FSH of pituitary gland stimulates and controls spermatogenesis. It acts on sertoli cells to facilitate last stages of maturation of spermatids. It further stimulates the production of androgens such as testosterone.

The LH of the pituitary acts on the Leydig's cells of the testes that releases testosterone. The temperature of testes should be maintained at 32oC for an effective production of spermatozoa.

Each mature spermatozoan is a motile cell . It has an oval flat head having an acrosome and a large nucleus containing chromosomal material. The head is followed by a short neck, a body (middle piece) and a long tail. The middle piece contains spiral mitochondrial sheaths which are the site of energy production. The tail has a main piece and an end piece. The energy for movement is provided by ATP molecule.

Puberty is a process in sexual development. Once puberty is reached sperms are manufactured continuously in the two testes at a rate of about 125 million each day. Puberty occurs between age 12-15 Hormones secreted by the pituitary cause levels of the male sex hormone testosterone to increase, stimulating changes such as general growth, and the development of secondary sexual characters.

Transport of spermatozoa. For reproduction to take place, the sperm must be transported to the female reproductive system. The mature spermatozoa that are formed leave each testis through an epididymis, a long coiled tube that lies above and behind each testis. The sperms are stored in the epididymis and periodically pushed into the vasdeferens the tube that connects an epididymis to an ejaculatory duct. During sexual activity each vas deferens, contracts and pushes the sperm toward urethra, the tube that connects the bladder to the outside of the body. The sperms are carried in a fluid consisting of secretions from various glands forming a thick seminal fluid or semen. 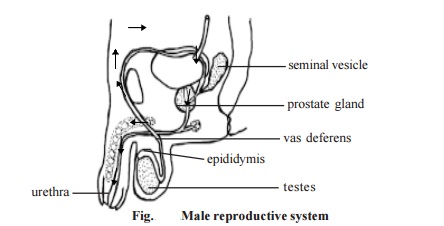 Semen is a milky mucoid fluid which contains sperms (50 million in single ejaculate) plus seminal plasma made up of secretions of the seminal vesicles, prostate, Cowper's gland and bulbo - urethral glands. Semen provides nutrient that help to keep the sperm healthy and also serves as a medium for the spermatozoa to swim.

During arousal, the penis gets enlarged and becomes firm. Muscular contraction at the have of the penis then forces the sperm through the male urethra into the vagina during male orgasm.

1.The hypothalamus of the brain controls the release of FSH and LH through its releasing factors.

2. FSH and LH stimulate the gonads. Hence the gonads produce sperms and secrete the hormone, testosterone.

3. Testosterone controls further male reproductive functions. It also helps to develop and maintain secondary sexual characters, such as enlargement of larynx, deepening of voice, growth of hair and other adolescent changes.

6. estosterone secretion by Leydig cells is stimulated by LH. The testosterone has its action on different target cells. It diffuses into the seminiferous tubules and stimulates spermatogenesis and suppresses secretion of LH by acting on hypothalamus and anterior pituitary.