A tabular arrangement of raw data by a certain number of classes and the number of items (called frequency) belonging to each class is termed as a frequency distribution.

·           Find the frequency of the data value as the total number of tally bars i.e., tally marks corresponding to that value. 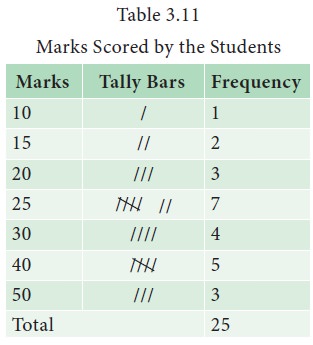 It is necessary to summarize and present large masses of data so that important facts from the data could be extracted for effective decisions. A large mass of data that is summarized in such a way that the data values are distributed into groups, or classes, or categories along with the frequencies is known as a continuous or grouped frequency distribution.

Table 3.12 displays the number of orders for supply of machineries received by an industrial plant each week over a period of one year. 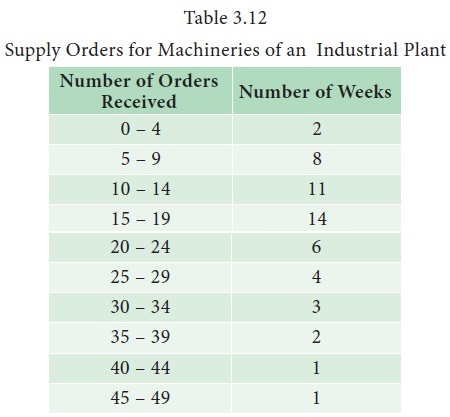 Class: If the observations of a data set are divided into groups and the groups are bounded by limits, then each group is called a class.

Class limits: The end values of a class are called class limits. The smaller value of the class limits is called lower limit (L) and the larger value is called the upper limit(U).

Class interval: The difference between the upper limit and the lower limit is called class interval (I). That is, I = U – L.

In this method, both the lower and upper class limits are included in the classes. Inclusive type of classification may be used for a grouped frequency distribution for discrete variable like members in a family, number of workers etc., It cannot be used in the case of continuous variable like height, weight etc., where integral as well as fractional values are permissible. Since both upper limit and lower limit of classes are included for frequency calculation, this method is called inclusive method.

The marks scored by 50 students in an examination are given as follows:

The continuous frequency distribution formed by inclusive and exclusive methods are displayed in Table 3.13(i) and Table 3.13(ii), respectively. 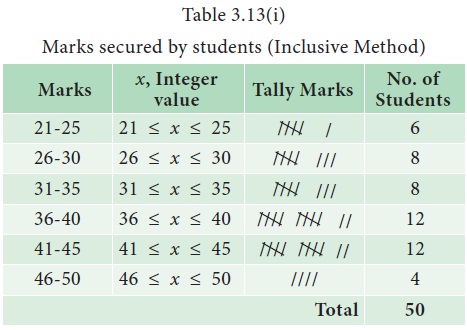 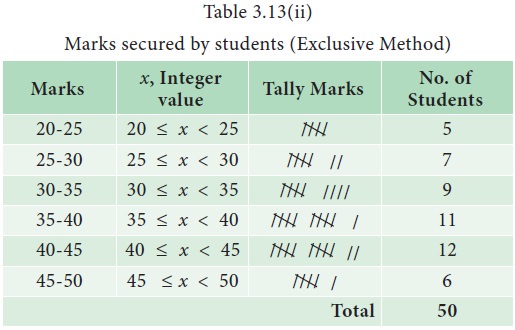 Salary received by 113 workers in a factory are classified into 6 classes. The classes and their frequencies are displayed in Table 3.14 Since the lower limit of the first class and the upper limit of the last class are not specified, they are open end classes. 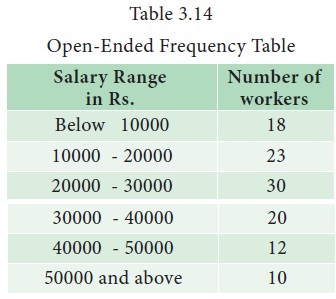 The following guidelines may be followed for compiling the continuous frequency distribution.

·           The values given in the data set must be contained within one (and only one) class and overlapping classes must not occur.

·           Frequency distributions having equal class widths throughout are preferable. When this is not possible, classes with smaller or larger widths can be used. Open ended classes are acceptable but only in the first and the last classes of the distribution.