Components of a Table

Generally a table should be comprised of the following components:

Components of a Table

Generally a table should be comprised of the following components:

i. Table Number and Title: Each table should be identified by a number given at the top. It should also have an appropriate short and self explanatory title indicating what exactly the table presents.

ii. Stub: Stubs stand for brief and self explanatory headings of rows.

iii. Caption: Caption stands for brief and self explanatory headings of columns. It may involve headings and sub-headings as well.

iv. Body of the Table: The body of the table should provide the numerical information in different cells.

v. Foot Note: The explanatory notes should be given as foot notes and must be complete in order to understand them at a later stage.

vi. Source of Data: It is always customary to provide source of data to enable the user to refer the original data. The source of data may be provided in a foot note at the bottom of the table.

A typical format of a table is given below: 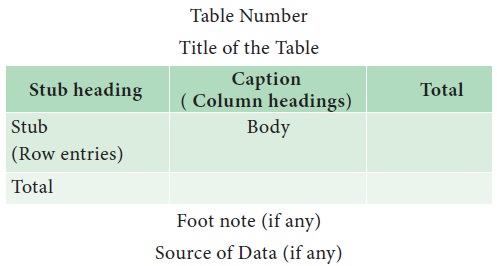 The following points may be considered while constructing statistical tables:

·           It must be free from ambiguity so that main characteristics from the data can be easily brought out.

·           Figures presented in columns for comparison must be placed as near to each other as possible. Percentages, totals and averages must be kept close to each other. Totals to be compared may be given in bold type wherever necessary.

·           Each table should have an appropriate short and self- explanatory title indicating what exactly the table presents.

·           The main headings and subheadings must be properly placed.

·           The explanatory notes should always be given as footnotes and must be complete in order to understand them at a later stage.

·           The column or row heads should indicate the units of measurements such as monetary units like Rupees, and other units such as meters, etc. wherever necessary.

·           Column heading may be numbered for comparison purposes. Items may be arranged either in the order of their magnitude or in alphabetical, geographical, and chronological or in any other suitable arrangement for meaningful presentation.

·           Figures as accurate as possible are to be entered in a table. If the figures are approximate, the same may be properly indicated.