Formation of NO and NO2

Kinetics of NO formation: While nitric oxide (NO) and nitrogen dioxide (NO2) are usually grouped together as Nox emissions, nitric oxide is the predominant oxide of nitrogen produced inside the engine cylinder.

Kinetics of NO formation:

While nitric oxide (NO) and nitrogen dioxide (NO2) are usually grouped together as Nox emissions, nitric oxide is the predominant oxide of nitrogen produced inside the engine cylinder. The principal source of NO is the oxidation of atmospheric (molecular) nitrogen. Gasoline contain negligible amounts of nitrogen: although diesel fuels contain more nitrogen, current levels are not significant.The mechanism of nitrogen formation is given below (Zeldovich Mechanism):

NO forms in both the flame front and the postflame gases. In engines however, combustion occurs at high pressure so the flame reaction zone is extremely thin (-0.1 mm) and residence time within this zone is short. Also, cylinder pressure rises during most of the combustion process, so burned gases produced early in the combustion process are compressed to a higher temperature than they reached immediately after combustion. Thus, NO formation in the postflame gases almost always dominates any flame-front-produced NO. It is, therefore, appropriate to assume that the combustion and NO formation processes are decoupled and to approximate the concentrations of 0, O2, OH, H and N2by their equilibrium temperature.

The strong dependence of dPJO]/dt on temperature in the exponential term is evident. High temperatures and high oxygen concentrations result in high NO. Figure shows the NO formation rate as a function of gas temperature and fuel/air equivalence ratio in post flame gases. Also shown is the adiabatic flame temperature attained by a fuel-air mixture initially at 700 K at a constant pressure of 15 atm. For adiabatic constant-pressure combustion (an appropriate model for each element of fuel that burns in an engine), this initial NO formation rate peaks at the stoichiometric composition, and decreases rapidly as the mixture becomes leaner or richer. 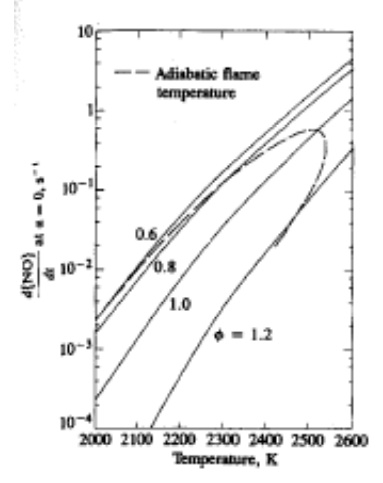 Chemical equilibrium considerations indicate that for burned gases at typical flame temperatures, NO2 / NO ratios should be negligibly small. While experimental data show this is true for spark ignition engines, in diesels NO2 can be 10 to 30 percent of the total exhaust oxides of nitrogen emissions. NO formed in the flame zone can be rapidly converted to NO2 via reactions such as

Important factors for formation of NO: