HC is basically divided into two classes namely methane and non-methane hydrocarbons. Below table shows classifications of hydrocarbons according to their relative reactivity which is the scale of 0 to 100based on their NO2 formation relatively to HC. 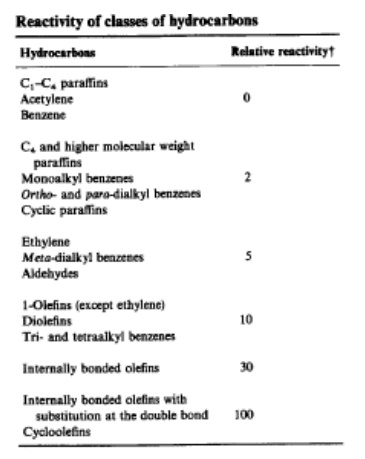 Formations of smoke and affecting factors:

Engine Exhaust smoke is the result of incomplete combustion. Smoke from exhaust is a visible indicator of the combustion process within the engine. It is generated at any volume in the engine where mixture is rich. The fuel air ratio greater than 1.5 and pressures developed in diesel engine produced soot. Once soot is formed, it can burn if it finds sufficient O2 otherwise it comes out with exhaust. It becomes visible if it is dense. The size of the soot particles effect the appearance of smoke. The soot particles agglomerate into bigger particles which have an objectionable darkening effect on diesel exhaust.

The main purpose of smoke measurement is to quantify the black smoke from diesel engine. As visibility is the main criterion in evaluating the intensity of smoke, development or principle of the smoke meter depends on the light obstruction by the smoke.

Even though there are several smoke measuring types, two basic and main types are discussed in this lecture.

The arrangement is shown in the figure. This consists of two optically identical tubes, one containing clean air and other the moving sample of the smoke. The clean air tube is taken as reference. A light source and photo-electric cell mounted facing each other on swinging arms. Movement of the change-over knob alters their position from 0-100, indicating the light absorbed by the smoke in hartridge units. A small fan blows air into the clean air-tube. The air flow the open ends of the tube across the surfaces of the light source and the photo-electric cell, to provide cooling and to protect them against sooting by the smoke. 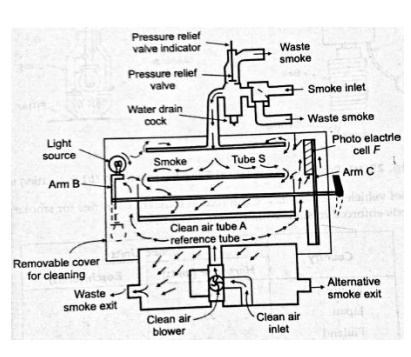 The bosch meter is widely accepted for measuring the diesel engine smoke. This concists of sampling pump and evaluating unit shown in the figure given below. The sampling pump is used to draw nearly 300CC of exhaust gas by means of spring operated pump and released by pneumatic operation of a diaphragm. The gas sample is drawn is through the filter paper darkening to give precise assessment of the intensity of the spot. The intensity of the spot is measured on a scale of 10 arbitary units called arbitrary units, called Bosch smoke units for white to black. 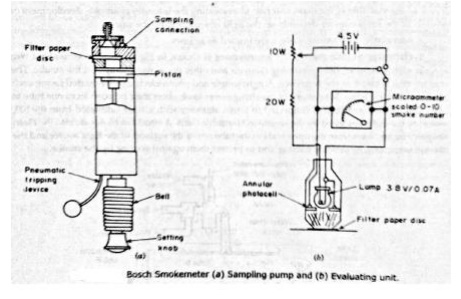