There are three classes of spark-ignition engine particulate emissions organic particulates (including soot), and sulphates.

Significant sulphate emissions can occur with oxidation-catalyst engines. Unleaded gasoline contains 150 to 600 ppm by weight sulphur, which is oxidized within the engine cylinder to sulphur dioxide, SO2. This SO, can be oxidized by the exhaust catalyst to SO, which combines with water at ambient temperatures to form a sulphuric acid aerosol. Levels of sulphate emissions depend on the fuel sulphur content, the operating conditions of the engine, and the details of the catalyst system used. Typical average automobile sulphate emission rates are 20 mg/km or less.

μmdiametersabout 40 percent below 0.2 μm diameter. Most of these particles are presumed to form and grow in the exhaust system due to vapour phase condensation enhanced by coagulation. Some of the particles are emitted directly, without settling. Some of the particles either form or are deposited on the walls where agglomeration may occur. Many of these are removed when the exhaust flow rate is suddenly increased, and these particles together with rust and scale account for the increase in mass and size of particles emitted during acceleration. Only fraction (between 10 and 50 percent) of the lead consumed in the fuel is exhausted, the remainder being deposited within the engine and exhaust system.

Diesel particulates consist of principally of combustion generated carbonaceous material (soot) on which some organic compounds has become absorbed. Most particulate material results from incomplete combustion of fuel hydrocarbons: some is contributed by the lubricating oil. The emission rates are typically 0.2 to 0.6 g/km for light duty diesels in an automobile. In larger direct injection engines, particulate emission rates are 0.5 to 1.5 g/brakeKW.h. The composition of particulate material depends on the conditions in the engine exhaust and particulate collection system. At temperatures above 500°C, the individual particles are principally clusters of many small spheres or spherules of carbon (with a small amount of hydrogen) with individual spherule diameter of about 15 to 30 mins. As temperature decreases: below 500°C, the particles become coated with absorbed and condensed high molecular weight organic compounds which include: unburned hydrocarbons, oxygenated hydrocarbons (ketones, esters, ethers, organic acids), and poly nuclear aromatic hydrocarbons. The condensed material also includes inorganic species such as sulphur dioxide, nitrogen dioxide and sulphuric acid 9 sulphates.

1.     To reduce the formation of pollutants in the emission by redesigning the engine system, fuel system, cooling system and ignition system.

2.     By destroying the pollutants after these have been formed.

In petrol engine, the main pollutants which are objectionable and are to be reduced are HC, CO and NOx. These methods are

a.     Modifications in the engine design.

Infra-red radiation is absorbed by a wide range of gas molecules, each of which has characteristics absorption spectrum. The fraction of radiation (τλ) at a particular wavelength λ is given by Beer’s law as

where ρ is gas density and αλ is the monochromatic absorbity and L is the path length.

The below figure shows the absorption spectra of CO and CO2. This shows that, infra-red radiation is absorbed by both in the region of 4.4μ. This means that when CO2 is present in the sample, it will affect the reading of CO and vice versa. This problem is eliminated by using a filter cell between the infra-red sources and the sample and reference cells. If the CO is to be measured, then the filter cell is filled with CO2 and any CO2 in the sample should not lead to any infra-red absorption. The windows of the analyser should be made of such materials (mica or quartz) which are transparent to infra-red radiation. 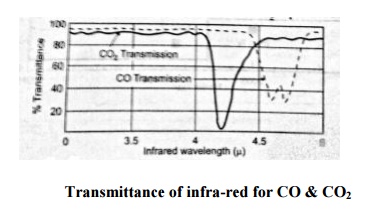 Transmittance of infra-red for CO & CO2

Principle: When hydro-carbons are burned, electrons and positive ions are formed. If unburned hydrocarbons are burned in the electric field, then the current flow corresponds very closely to the number of carbon atoms present.

Flame ionisation detector is shown in figure given below. The sample is mixed with the fuel and burned in air. The fuel should not cause any ionisation so a hydrogen-helium mixture is used. The air should be of high purity for reducing the risk of introducing hydrocarbons. The fuel and sample flows are to be regulated as the response of the instrument is directly proportional to the flow rate of sample as the influences the burner temperature. The flow is regulated by maintaining fixed pressure difference across the device. 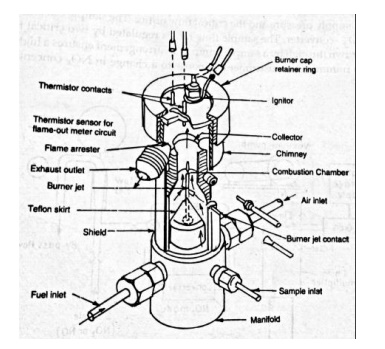 The burner jet and annular collector from the electrodes and a potential of about 100V is applied between them. The signals are amplified and calibration is achieved by zeroing instrument with a sample containing pure N2.

Chemiluminescence of measuring NO:

Principle: Chemiluminescence technique depends on the emission of light. NO (nitric oxide) reacts with O3 to produce NO2 in activated NO2 which emits in due course as it converts to normal state (NO2).

The photon light emitted is proportional to the concentration of NO in the sample stream. Both NO and NO2 exists in the engine exhaust NO2 can be measured by passing the sample over a catalyst that converts

By switching the convertor in and out of the sample line the concentration of NO and (NO + NO2) can be measured in the exhaust sample.

The below figure represents the key element of NOx, (NO + NO2) analyser. The vacuum pump controls the pressure in the reaction chamber and responsible for drawing in O3 and exhaust sample. The O3 is generated by an electric discharge in O2 at low pressure and flow of O3 is controlled by O2 supply pressure and the critical flow orifice. The sample can be either by-pass or flow through the NO2-convertor. The sample flow rate is regulated by two critical flow rate orifices. The bypass flow is drawn through by a sample pump. This arrangement ensures a high flow rate of sample gas, so as to minimise the instrument response to change in NOx concentration in the sample. 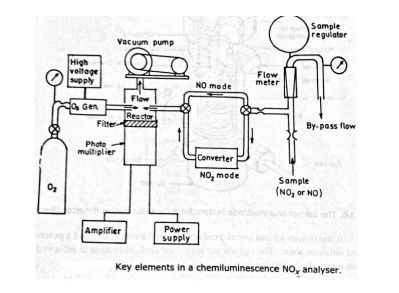