The most effective way of reducing NOx emissions is to hold combustion chamber temperatures down. Although practical, this is a very unfortunate method in that it also reduces the thermal efficiency of the engine.

The most effective way of reducing NOx emissions is to hold combustion chamber temperatures down. Although practical, this is a very unfortunate method in that it also reduces the thermal efficiency of the engine. We have been taught since infancy in our first thermodynamics course that for maximum engine thermal efficiency, Qin should be at the highest temperature possible.

Probably the simplest practical method of reducing maximum flame temperature is to dilute the air-fuel mixture with a non-reacting parasite gas. This gas absorbs energy during combustion without contributing any energy input. The net result is a lower flame temperature. Any non-reacting gas would work as a diluent, as shown in Fig. Those gases with larger specific heats would absorb the most energy per unit mass and would therefore require the least amount; thus less C02 would be required than argon for the same maximum temperature. However, neither C02 nor argon is readily available for use in an engine. Air is available as a diluent but is not totally non-reacting. Adding air changes the AF and combustion characteristics. The one

Non-reacting gas that is available to use in an engine is exhaust gas, and this is used in all modern automobile and other medium-size and large engines. 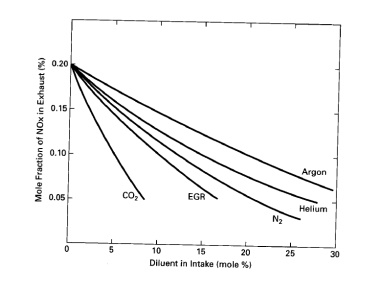 Exhaust gas recycle (EGR) is done by ducting some of the exhaust flow back into the intake system, usually immediately after the throttle. The amount of flow can be as high as 30% of the total intake. EGR gas combines with the exhaust residualleft in the cylinder from the previous cycle to effectively reduce the maximum combustion temperature.

Not only does EGR reduce the maximum temperature in the combustion chamber, but it also lowers the overall combustion efficiency. Above Fig shows that as EGR are increased, the percent of inefficient slow-burn cycles increases. Further increase in EGR results in some cycle partial burns and, in the extreme, total misfires. Thus, by using EGR to reduce NOx emissions, a costly price of increased HC emissions and lower thermal efficiency must be paid.

The amount of EGR is controlled by the EMS. By sensing inlet and exhaust conditions the flow is controlled, ranging from 0 up to 15-30%. Lowest NOx emissions with relatively good fuel economy occur at about stoichiometric combustion, with as much EGR as possible without adversely affecting combustion. No EGR is used during WOT, when maximum power is desired. No EGR is used at idle and very little at low speeds. Under these conditions, there is already maximum exhaust residual and greater combustion inefficiency. Engines with fast-burn combustion chambers can tolerate a greater amount of EGR.

A problem unique to CI engines when using EGR is the solid carbon soot in the exhaust. The soot acts as an abrasive and breaks down the lubricant. Greater wear on the piston rings and valve train results.

Engines and fuel supply systems also have sources of emissions other than exhaust flow. Historically, these were considered minor and were just released to the surrounding air.

A major source of HC emissions was the crankcase breather tube that was vented to the air in older automobiles. Blow by flow past the pistons ended up in the crankcase, and due to the higher pressure it created, it was then pushed out the breather vent tube. Blow by gas is very high in HCs, especially in 81 engines. Also, in older engines with greater clearance between the piston and cylinder wall, blow by flow was much higher. As much as 1% of the fuel was vented to the atmosphere through the crankcase breather in some automobiles. This accounted for up to 20% of total emissions. A simple solution to this problem, which is used on all modern engines, is to vent the crankcase breather back into the intake system. This not only reduces emissions but also increases fuel economy.

To keep the pressure at one atmosphere in the fuel tank and in the fuel reservoir of a carburetor, these systems are vented to the surroundings. Historically, these vents were an additional source of HC emissions when fuel evaporated from these fuel reservoirs. To eliminate these emissions, fuel vents now include some form of filter or absorption system which stops the HC vapour from escaping. One such system absorbs the HCs onto the surface of a carbon filter element. Then, when the engine is operating, the element is back flushed and the HC is desorbed off the surface. The recovered HC is ducted into the engine intake with no resulting emissions.

Many modern gasoline pumps and other fuel-dispensing systems are equipped with vapour-collecting nozzles that reduce HC vapour lost to the atmosphere during refuelling.