FDI is an important factor in global economy.

FDI is an important factor in global economy. Foreign trade and FDI are closely related. In developing countries like India, FDI in the natural resource sector, including plantations, increases trade volume. Foreign production by FDI is useful to substitute foreign trade. FDI is also influenced by the income generated from the trade and regional integration schemes.

FDI is helpful to accelerate the economic growth by facilitating essential imports needed for carrying out development programmes like capital goods, technical know-how, raw materials and other inputs and even scarce consumer goods. 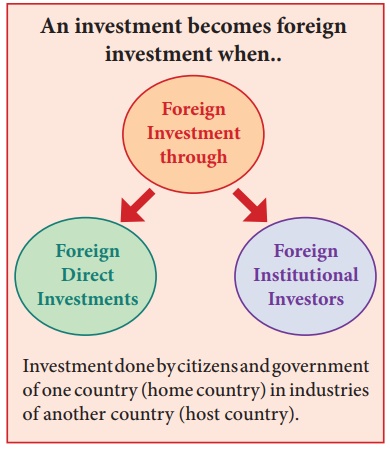 When the export earnings of a country are not sufficient to finance for imports, FDI may be required to fill the trade gap.

FDI is encouraged by the factors such as foreign exchange shortage, desire to create employment and acceleration of the pace of economic development. Many developing countries strongly prefer foreign investment to imports. However, the real impact of FDI on different sections of an economy (say India) may differ. It could be a boon for some as well as bane for others. This may be discussed in the class – room. Large demand for USD, generated by IMF and World Bank policies (FUND – BANK POLICIES), help the USD to gain value continuously. This is one of the hidden agenda of Fund – Bank policies.

Foreign Portfolio Investment (FPI) means the entry of funds into a nation where foreigners deposit money in a nation’s bank or make purchase in the stock and bond markets, sometimes for speculation. FPI is part of capital account of BoP.

FDI has the following objectives.

The important advantages of foreign direct investment are the following:

1.        FDI may help to increase the investment level and thereby the income and employment in the host country.

2.        Direct foreign investment may facilitate transfer of technology to the recipient country.

3.        FDI may also bring revenue to the government of host country when it taxes profits of foreign firms or gets royalties from concession agreements.

4.        A part of profit from direct foreign investment may be ploughed back into the expansion, modernization or development of related industries.

5.        It may kindle a managerial revolution in the recipient country through professional management and sophisticated management techniques.

6.        Foreign capital may enable the country to increase its exports and reduce import requirements. And thereby ease BoP disequilibrium.

10.   Foreign investments may stimulate domestic enterprise to invest in ancillary industries in collaboration with foreign enterprises.

11.   Lastly, FDI flowing into a developing country may also encourage its entrepreneurs to invest in the other LDCs. Firms in India have started investing in Nepal, Uganda, Ethiopia and Kenya and other LDCs while they are still borrowing from abroad. Larger FDI to India comes from a small country (Mauritius).

The following criticisms are leveled against foreign direct investment.

1.        Private foreign capital tends to flow to the high profit areas rather than to the priority sectors.

2.        The technologies brought in by the foreign investor may not be appropriate to the consumption needs, size of the domestic market, resource availabilities, stage of development of the economy, etc.

3.        Foreign investment, sometimes, have unfavorable effect on the Balance of Payments of a country because when the drain of foreign exchange by way of royalty, dividend , etc. is more than the investment made by the foreign concerns.

6.        Foreign investment in some cases leads to the destruction or weakening of small and medium enterprises.

7.        Sometimes foreign investment can result in the dangerous situation of minimizing / eliminating competition and the creation of monopolies or oligopolistic structures.

8.        Often, there are several costs associated with encouraging foreign investment.

The early 1990s witnessed reforms in the economic policy. This helped to open up Indian markets to FDI. FDI in India has increased over the years. In India, FDI has been advantageous in terms of free flow of capital, improved technology, management expertise and access to international markets.

The major sectors benefited from FDI in India are:

FDI is not permitted in the industrial sectors like