1.  The Classical Theory of International Trade

Takes an us-versus - them view of trade

Adam Smith argued that all nations can be benefitted when there is free trade and specialisation in terms of their absolute cost advantage.

1. There are two countries and two commodities (2 x 2 model).

2. Labour is the only factor of production.

4. The cost or price of a commodity is measured by the amount of labour required to produce it.

5. There is no transport cost.

Absolute cost advantage theory can be illustrated with the help of the following example. 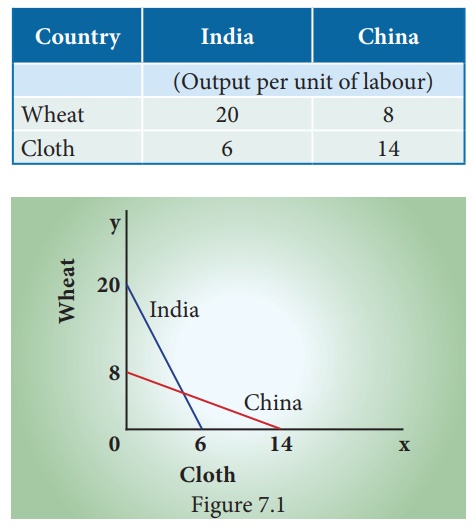 David Ricardo , the British economist in his ‘Principles of Political Economy and Taxation’ published in 1817, formulated a systematic theory called ‘Comparative Cost Theory’. Later it was refined by J.S Mill, Marshall, Taussig and others.

According to Ricardo, a country can gain from trade when it produces at relatively lower costs. Even when a country enjoys absolute advantage in both goods, the country would specialize in the production and export of those goods which are relatively more advantageous. Similarly, even when a country has absolute disadvantage in production of both goods, the country would specialize in production and export of the commodity in which it is relatively less disadvantageous.

4.        Labour is perfectly mobile within the country but perfectly immobile between countries.

Ricardo’s theory of comparative cost can be explained with a hypothetical example of production costs of cloth and wheat in America and India.

(Units of labour required to produce one unit) 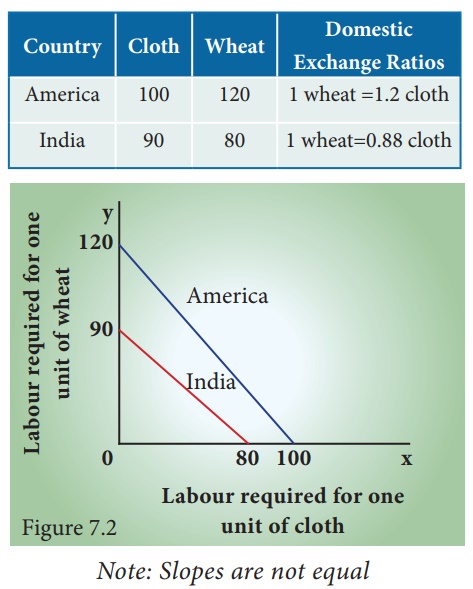 2. Labourers in different countries are not equal in efficiency.

Developed by Heckscher and Ohlin

Countries  with  a  relative  factor abundance can specialise and trade

i) difference in the endowments of factors of production between countries, and

ii) differences in the factor proportions required in production.

6.  There is perfect competition in both product and factor markets in both the countries.

According to Heckscher - Ohlin, “a capital-abundant country will export the capital –intensive goods, while the labour-abundant country will export the labour-intensive goods”. A factor is regarded abundant or scare in relation to the quantum of other factors. A country can be regarded as richly endowed with capital only if the ratio of capital to other factors is higher than other countries.

In the above example, even though India has more capital in absolute terms, America is more richly endowed with capital because the ratio of capital in India is 0.8 which is less than that in America where it is 1.25. The following diagram illustrates the pattern of word trade.

1. Factor endowment of a country may change over time.

2. The efficiency of the same factor (say labour) may differ in the two countries. For example, America may be labour scarce in terms of number of workers. But in terms of efficiency, the total labour may be larger.

1. The classical theory explains the phenomenon of international trade on the basis of labour theory of value.

2. It presents a one factor (labour) model

1. The modern theory explains the phenomenon of international trade on the basis of general theory of value.

2. It presents a multi - factor (labour and capital) model.