Balance of Trade and Balance of Payments are two different concepts in the subject of international trade.

Balance of Trade and Balance of Payments are two different concepts in the subject of international trade. 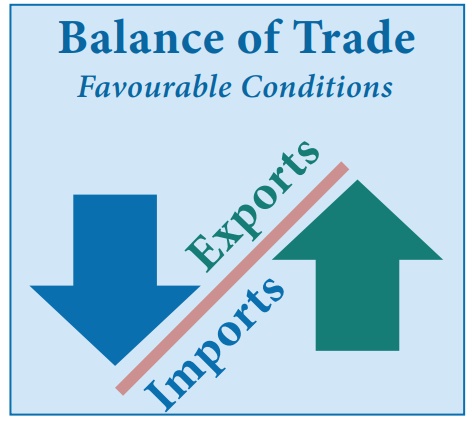 BoP is a systematic record of a country’s economic and financial transactions with the rest of the world over a period of time. 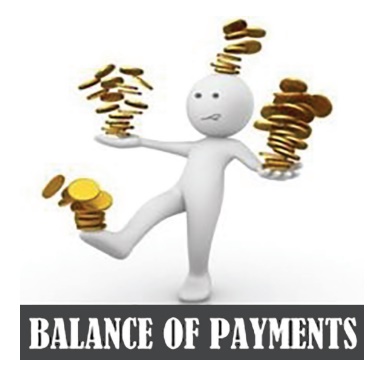 When a payment is received from a foreign country, it is a credit transaction while a payment to a foreign country is a debit transaction. The principal items shown on the credit side are exports of goods and services, transfer receipts in the form of gift etc., from foreigners, borrowing from abroad, foreign direct investment and official sale of reserve assets including gold to foreign countries and international agencies.

The credit and debit items are shown vertically in the BOP account of a country. Horizontally, they are divided into three categories, i.e.

c) The Official Reserve Assets Account: Official reserve transactions consist of movements of international reserves by governments and official agencies to accommodate imbalances arising from the current and capital accounts.

The official reserve assets of a country include its gold stock, holdings of its convertible foreign currencies and Special Drawing Rights (SDRs) and it1s net position in the International Monetary Fund (IMF).

The BoP is said to be balanced when the receipts (R) and payments (P) are just equal, i.e, 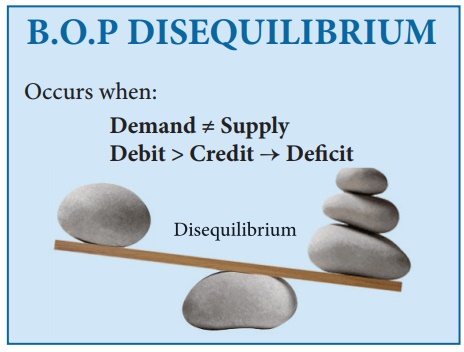 When receipts exceed payments, the BoP is said to be favourable. That is,

When receipts are less than payments, the BoP is said to be unfavourable or adverse.That is

There are three main types of BOP Disequilibrium, which are discussed below.

a) Cyclical Disequilibrium: Cyclical disequilibrium occurs because of two reasons. First, two countries may be passing through different phases of business cycle. Secondly, the elasticities of demand may differ between countries.

b) Secular Disequilibrium: The secular or long-run disequilibrium in BOP occurs because of long-run and deep seated changes in an economy as it advances from one stage of growth to another. In the initial stages of development, domestic investment exceeds domestic savings and imports exceed exports, as it happens in India since 1951.

The following are the major causes producing disequilibrium in the balance of payments of a country.

1. Cyclical Fluctuation: Cyclical disequilibrium in different countries is caused by their cyclical fluctuations, their  phases  and  magnitude.  World trade shrinks during depression while trade flourishes during prosperity

2. Structural Changes: Structural disequilibrium is caused by the structural changes brought by huge development and investment programmes in the developing economies.Such economies may have high propensity to import for want of capital for rapid industrialization, while export may not be boosted up to that extent.

3. Development Expenditure: Development disequilibrium is caused by rapid economic development which results  in  income  and  price  effects. The less developed countries in the early  stage  of  development  are  not self  sufficient.  Income,  savings  and investment  are  abysmally  low.  They depend upon developed countries for import  of  commodities,  capital  and technology. Export potential is low and import intensity is high. So the LDCs suffer from adverse BoP.

4. Consumerism: Balance of payments position of a country is adversely affected by a huge increase in consumption. This increases the need for imports and decreases the capacity to export.

7. Technological Backwardness: Due to technological backwardness, the people (Indians) are unable to use the energy (Solar) available with them. As a result they import huge petroleum products from foreign countries, increasing the trade deficit.

8. Global Politics: The rich countries (Eg. USA) need to sell their weapons to promote their economy and generate employment. Hence, wars between countries (for example Iran and Irag, Pakistan and India) are stimulated In order to win the wars, the poor countries are forced to buy the weapons from weapon – rich countries, using their export earnings and creating trade deficit. Thus UDCs are trapped forever. 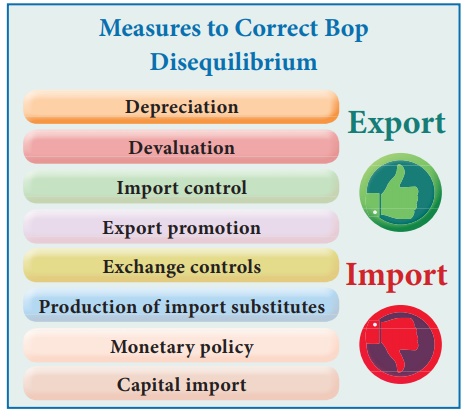 There are a number of measures available for correcting the balance of payments disequilibrium. They are divided into two baord groups, namely,automatic correction and (ii) deliberate measures.

If the market forces of demand and supply are allowed to play freely, equilibrium will be automatically restored in course of time. Under the free exchange rate system, the automatic adjustments of the balance of payments can take place through changes in the variables like price, interest, income and capital flows.

The contraction or expansion of money supply resulting from the BoP deficit or surplus leads to a rise or fall in the interest rates. A rise in interest rate in the deficit country will encourage investors to withdraw their funds from abroad and invest in their home country. The opposite happens in the surplus country.

A nation with payments surplus will experience rising income which will increase imports and thereafter equilibrium is restored in Balance of Payments. 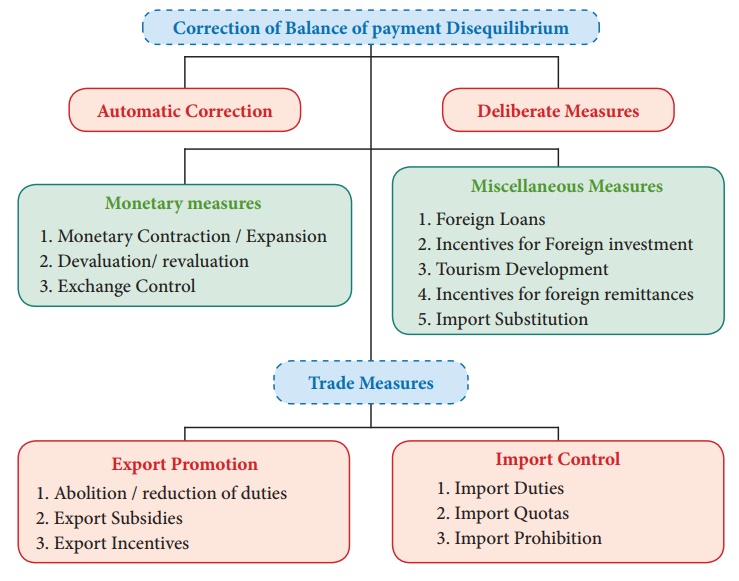 Changes in the interest rate consequent to the BoP disequilibrium will encourage capital flows from the surplus nations to deficit nations helping restoration of the BoP equilibrium.

The deliberate measures may be broadly grouped into (a) monetary measures (b) trade measures and (c) miscellaneous measures.

High domestic price level is responsible for high imports and low exports. In order to control inflation, the central monetary authority controls credit. As a result, the prices come down and exports increase. This will help to correct adverse BoP. However, if credit is controlled, investment will decline, production will go down, prices will increase. This is the cause of confusion between government and RBI in India in 2010s.

Devaluation means deliberate reduction of the official rate at which domestic currency is exchanged for another currency. In other words, devaluation refers to a reduction in the external value of a currency in the terms of other currencies. For instance, instead of 70 ₹ per US$, making ₹ 80 per US$. 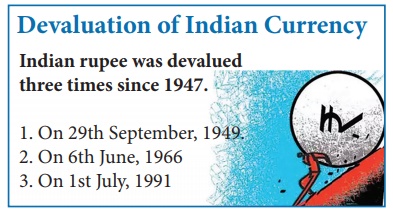 A country with fundamental disequilibrium in the balance of payments may devalue its currency in order to stimulate its exports and discourage imports to correct the disequilibrium. Devaluation makes exports cheaper and imports dearer. That means making Indian good cheaper for foreigners, and foreign goods costlier for Indians.

Trade measures include measures to promote exports and to reduce imports.

Imports may be controlled by i).imposing or enhancing import duties, ii).restricting imports through import quotas, iii).licensing and even prohibiting altogether the import of certain non essential items. But this would encourage smuggling.

In addition to the measures mentioned above, there are a number of other measures that can help make the balance of payments position more favourable, like i). foreign loans, ii).encouraging foreign investment in the home country, iii).development of tourism to attract foreign tourists, iv).providing incentives to enhance inward remittances and v). import substitution.