FOREX is the system or process of converting one national currency into another, and of transferring money from one country to another.

FOREX refers to foreign currencies. The mechanism through which payments are effected between two countries having different currency systems is called FOREX system . It covers methods of payment, rules and regulations of payment and the institutions facilitating such payments.

“FOREX is the system or process of converting one national currency into another, and of transferring money from one country to another”.

The transactions in the exchange market are carried out at exchange rates. It is the external value of domestic currency. Thus, exchange rate may be defined as the price paid in the home currency (say ₹ 75) for a unit of foreign currency (say 1 US $). It can be quoted in two ways:

1. One unit of foreign money (1 USD) to so many units of the domestic currency (₹); or

2. A certain number of units of foreign currency (USD)to one unit of domestic money (₹ 1) 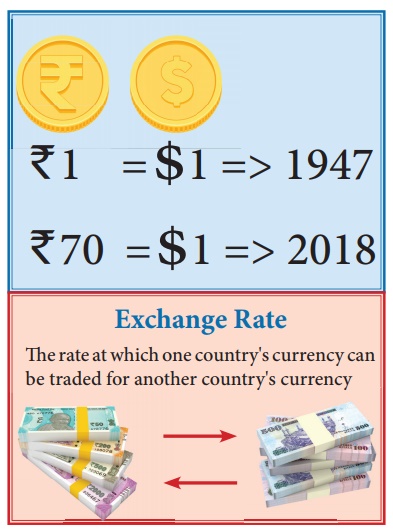 “The equilibrium exchange rate is that rate, which over a certain period of time, keeps the balance of payments in equilibrium”. 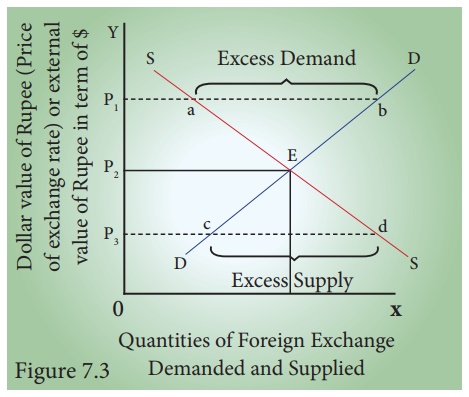 Under the flexible exchange rate (also known as floating exchange rate) system, exchange rates are freely determined in an open market by market forces of demand and supply.

This is the bilateral nominal exchange rate.

If real exchange rate is equal to 1, the currencies are at purchasing power parity.

NEER and REER are not explained here.

Exchange rates are determined by numerous factors and they are related to the trading relationship between two countries. 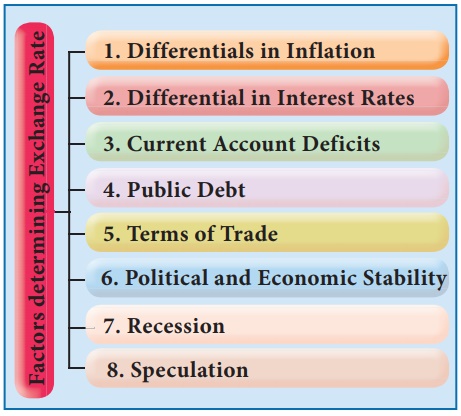 Inflation and exchange rates are inversely related. A country with a consistently lower inflation rate exhibits a rising currency value, as its purchasing power increases relative to other currencies.

A deficit in the current account implies excess of payments over receipts. The country resorts to borrowing capital from foreign sources to make up the deficit. Excess demand for foreign currency lowers a country’s exchange rate.

Large public debts are driving out foreign investors, because it leads to inflation. As a result, exchange rate will be lower.

If a nation’s political climate is stable and economic performance is good, its currency value will be appreciated by attracting more foreign capital.

Interest rates are low during the recession phase. This will decrease inflow of foreign capital. As a result, a currency will be depreciated against other currencies, thereby lowering the exchange rate.

If a country’s currency value is expected to rise, investors will demand more of that currency in order to make a profit in the near future. This results in appreciation of the exchange rate. Beside the above determinants, relative dominance in the global politics and the power to announce economic sanctions over other countries also determine exchange rates.