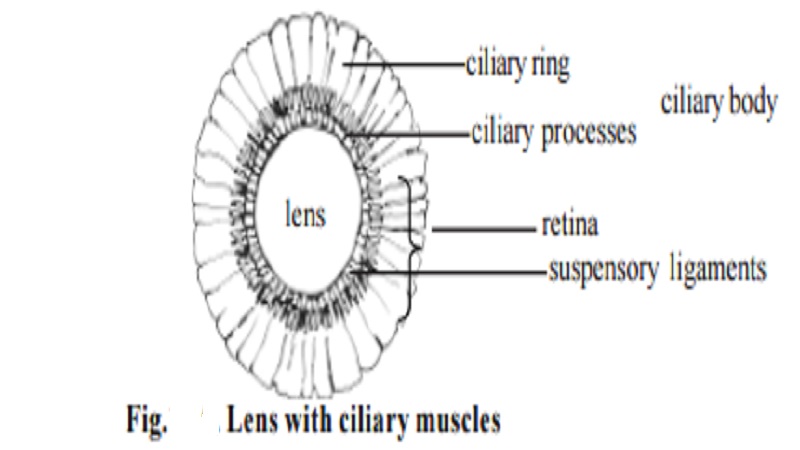 The visual system gives information about size, shape, color, luminosity and movements of object in the external world.

Between the cornea and the lens is a colourless, watery fluid called aqueous humour. At the back of the eye between the lens and the retina is the vitreous humour made of a gelatinus mucoprotein. The humours are transparent so that transmissions of light through the cavities of the eye to the retina is not normally impeded. Human eye has a lens apparatus whose convexity can be adjusted for focusing near and distant objects. This ability of the eyes to focus objects at varying distances is called ACCOMMODATION. The accommodation is achieved due to suspensory ligament, ciliary muscle and ciliary body.

When a normal eye is looking at a distant object, the ciliary muscles is fully relaxed and parallel rays from the object come to focus on the retina. Hence a clear image is seen. When the object is brought close to the eye the refractive power of the eye is increased by the process of accommodation. The increase in refractive power is the result of an increase in the curvature of the anterior surface of the lens. This avoids the blurred image for a closer object. Similar accommodation happens for viewing a distant object by stretching the suspensory ligament attached to the lens. This act alters the contour of the lens.

Rhodopsin or Visual Purple is a puplish red photosensitive pigment present in the outer segment of the rods (120 million rods). It is made up of

protein portion, an opsin (scotopsin) combined with an aldehyde of vitamin A called Retinene 1, which is referred to as a retino. On exposure to light, rhodopsin is bleached, ie., broken down to retinene and opsin, but is resynthesised in the dark. Some of the retinene recombines with scotopsin to form rhodopsin while some are reduced to vitamin A. The rods are extremely sensitive to light and are responsible for vision in dim light. This is called SCOTOPIC VISION.

Cones also contain visual pigments made up of retinene, combined with a protein opsin (photopsin). Three pigments each responding to different wavelength are found in man. There are three primary colors namely red, green and blue. Color vision is a function of bright light vision and cones are responsible for color perceptions. In bright light maximum perception of colors is at the fovea region of the retina where rods are absent and only cones are present. In dim light when the rods in the extra foveal retina function, colors are not perceived and the various colors appear as shades of grey. Cones function in bright light and the system has more acuity and can perceive colors (PHOTOPIC VISION).

Photochemical basis of retinal function is a basis of conversion of light energy into nerve impulses. It is this process that excites the nerve fibres and sets up nerve impulses.

The impulses generated in the receptor neurons in response to generator potentials in the cones are interpreted by the brain as the appropriate intermediate colour. The interpretation or perception of colour pictures seen by our eyes is a complex function of the brain. It is located in the occipital lobe of the cerebral cortex.

The axons of ganglion cells pass through the eyeball at the posterior end and form the optic nerve which enters the cranial cavity. Therefore this region of the retina lacks receptors and is unable to perceive images which fall on it. This region is called optic disc and when charting the field of vision it is referred to as the blind spot.

In a normal eye focused for distant objects, parallel rays of light come to a sharp focus exactly on the retina. It can accommodate for clear vision of objects from infinity (far point) down to 25 cm (near point). This ideal refractive state is calledemmetropia. A deviation from emmetropia is called ametropia . The important forms of ametropia are myopia , hypermetropia,astigmatism, presbiopia. Ametropia results from an imbalance between the length of the eye ball and its refractive power.