Fission of a covalent bond

All organic molecules contain covalent bonds which are formed by the mutual sharing of electrons between atoms.

Fission of a covalent bond

Homolytic cleavage is the process in which a covalent bond breaks symmetrically in such way that each of the bonded atoms retains one electron. It is denoted by a half headed arrow (fish hook arrow). This type of cleavage occurs under high temperature or in the presence of UV light in a compound containing non polar covalent bond formed between atoms of similar electronegativity. In such molecules, the cleavage of bonds results into free radicals. They are short lived and are highly reactive. The type of reagents that promote holmolytic cleavage in substrate are called as free radical initiators. For example Azobisisobutyronitile (AIBN) and peroxides such as benzoyl peroxide are used as free radical initiators in polymerisation reactions.

Heterolytic cleavage is the process in which a covalent bond breaks unsymmetrically such that one of the bonded atoms retains the bond pair of electrons. It results in the formation of a cation and an anion. Of the two bonded atoms, the most electronegative atom becomes the anion and the other atom becomes the cation. The cleavage is denoted by a curved arrow pointing towards the more electronegative atom.

Let us consider the cleavage in a carbon-hydrogen (C-H) bond of aldehydes or ketones We know that the carbon is more electronegative than hydrogen and hence the heterolytic cleavage of C-H bonds results in the formation of carbanion (carbon bears a negative charge). For example in aldol condensation the OH- ion abstracts a α-hydrogen from the aldehyde, which leads to the formation of the below mentioned carbanion.

Hybridisation of carbon in carbocation: 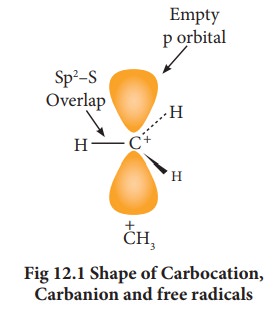 The carbanions are generally pyramidal in shape and the lone pair occupies one of the sp3 hybridised orbitals. An alkyl free radical may be either pyramidal or planar. 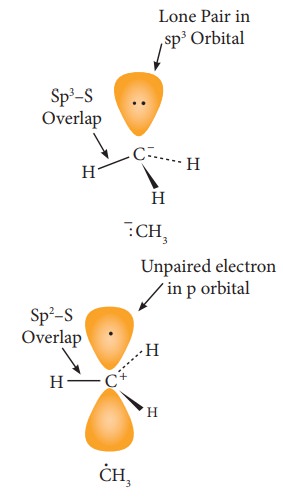 The relative stability of the alkyl carbocations and carbanions are given below.