Some of the properties of organic molecules such as stability, reactivity, basicity etc., are affected by the displacement of electrons that takes place in its covalent bonds.

Some of the properties of organic molecules such as stability, reactivity, basicity etc., are affected by the displacement of electrons that takes place in its covalent bonds. This movement can be influenced by either the atoms/groups present in close proximity to the bond or when a reagent approaches a molecule. The displacement effects can either be permanent or a temporary. In certain cases, the electron displacement due to an atom or a substituent group present in the molecule cause a permanent polarisation of the bond and it leads to fission of the bond under suitable conditions. The electron displacements are catagorised into inductive effect (I), resonance effect (R), electromeric effect (E) and hyper conjugation.

Inductive effect is defined as the change in the polarisation of a covalent bond due to the presence of adjacent bonds, atoms or groups in the molecule. This is a permanent phenomenon.

Let us explain the inductive effect by considering ethane and ethylchloride as examples. The C-C bond in ethane is non polar while the C-C bond in ethyl chloride is polar. We know that chlorine is more electronegative than carbon, and hence it attracts the shared pair of electron between C-Cl in ethyl chloride towards itself. This develops a slight negative charge on chlorine and a slight positive charge on carbon to which chlorine is attached. To compensate it, the C1 draws the shared pair of electron between itself and C2. This polarisation effect is called inductive effect. This effect is greatest for the adjacent bonds, but they also be felt farther away. However, the magnitude of the charge separation decreases rapidly, as we move away from C1 and is observed maximum for 2 carbons and almost insignificant after 4 bonds from the active group.

It is important to note that the inductive effect does not transfer electrons from one atom to another but the displacement effect is permanent. The inductive effect represents the ability of a particular atom or a group to either withdraw or donate electron density to the attached carbon. Based on this ability the substituents are classified as +I groups and -I groups. Their ability to release or withdraw the electron through sigma covalent bond is called +I effect and -I effect respectively.

Higher the electronegativity of the substitutent, greater is the -I effect. The order of the –I effect of some groups are given below.

Highly electropositive atoms and atoms are groups which carry a negative charge are electron donating or +I groups.

Lesser the electronegativity of the elements, greater is the +I effect. The relative order of +I effect of some alkyl groups is given below

Let us understand the influence of inductive effect on some properties of organic compounds.

When a highly electronegative atom such as halogen is attached to a carbon then it makes the C-X bond polar. In such cases the -I effect of halogen facilitates the attack of an incoming nucleophile at the polarised carbon, and hence increases the reactivity. 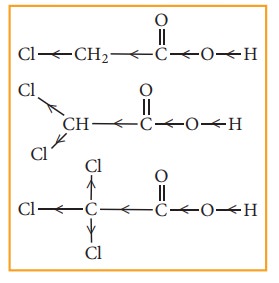 Similarly, the following order of acidity in the carboxylic acids is due to the +I effect of alkyl group.

Electromeric is a temporary effect which operates in unsaturated compounds (containing >C=C<, >C=O, etc...) in the presence of an attacking reagent.

When a nucleophile approaches the carbonyl compound, the π electrons between C and O is instantaneously shifted to the more electronegative oxygen. This makes the carbon electron deficient and thus facilitating the formation of a new bond between the incoming nucleophile and the carbonyl carbon atom.

On the other hand when an electrophile such as H+ approaches an alkene molecule, the π electrons are instantaneously shifted to the electrophile and a new bond is formed between carbon and hydrogen. This makes the other carbon electron deficient and hence it acquires a positive charge.

When the π electron is transferred towards the attacking reagent, it is called + E (positive electromeric) effect.

The addition of H+ to alkene as shown above is an example of +E effect.

When the π electron is transfered away from the attacking reagent, it is called, -E (negative electromeric) effect

The attack of CN- on a carbonyl carbon, as shown above, is an example of -E effect.

For example, the structure of aromatic compounds such as benzene and conjugated systems like 1,3-butadiene cannot be represented by a single structure, and their observed properties can be explained on the basis of a resonance hybrid. 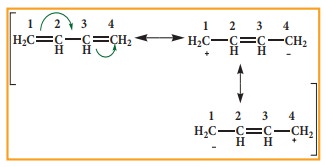 In such cases, the attached group has a tendency to withdraw electrons through resonance. These electron withdrawing groups are usually denoted as -R or -M groups. Examples : NO2, >C=O, -COOH,-C≡N etc

Resonance is useful in explaining certain properties such as acidity of phenol. The phenoxide ion is more stabilised than phenol by resonance effect(+M effect) and hence resonance favours ionisation of phenol to form H+ and shows acidity. 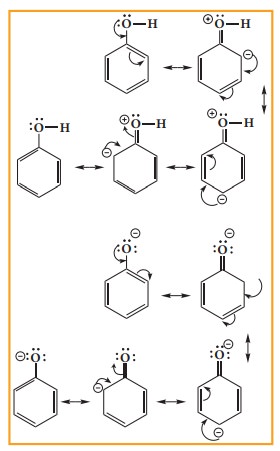 The above structures shows that there is a charge separation in the resonance structure of phenol which needs energy, where as there is no such hybrid structures in the case of phenoxide ion. This increased stability accounts for the acidic character of phenol.

The delocalisation of electrons of σ bond is called as hyper conjugation. It is a special stabilising effect that results due to the interaction of electrons of a σ-bond (usually C-H or C-C) with the adjacent, empty non-bonding p-orbital or an anti-bonding σ* or π*-orbitals resulting in an extended molecular orbital. Unlike electromeric effect, hyper conjugation is a permanent effect.

It requires an α-CH group or a lone pair on atom like N, O adjacent to a π bond (sp2 hybrid carbon). It occurs by the overlapping of the σ-bonding orbital or the orbital containing a lone pair with the adjacent π-orbital or p-orbital.

In propene, the σ-electrons of C-H bond of methyl group can be delocalised into the π-orbital of doubly bonded carbon as represented below. 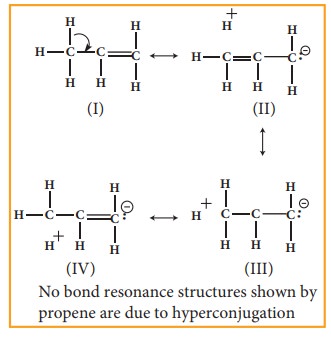 In the above structure the sigma bond is involved in resonance and breaks in order to supply electrons for delocalisation giving rise to 3 new canonical forms. In the contributing canonical structures: (II), (III) &

(IV) of propene, there is no bond between an α-carbon and one of the hydrogen atoms. Hence the hyperconjugation is also known as “no bond resonance” or “Baker-Nathan effect”. The structures (II), (III) & (IV) are polar in nature. 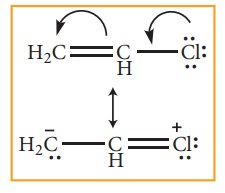 When electronegative atoms or group of atoms are in conjugation with a π -bond,they pull π - electrons from the multiple bond. 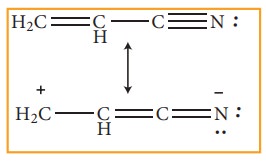 In case of carbocations, greater the number of alkyl groups attached to the carbon bearing positive charge, greater is number of the hyper conjugate structure. thus the stability of various carbocations decreases in the order