Organic compounds undergo many number of reactions, however in actual sense we can fit all those reactions into the below mentioned six categories.

•     Combination of the above

This reaction can be represented as

Here Y– is the incoming nucleophile or and attacking species and x– is the leaving group.

Aliphatic nucleophilic substitution reactions take places either by SN1 or SN2 mechanism. Detailed study of the mechanisms is given in unit 14.

Mechanism of aromatic electrophilic substitution reactions (EAS) is discussed in detail in unit 13.

A general aliphatic electrophilic substitution is represented as 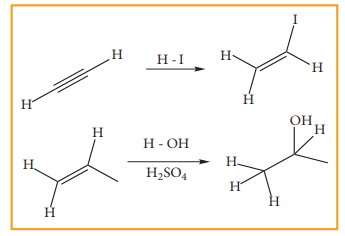 A general electrophilic addition reaction can be represented as below. 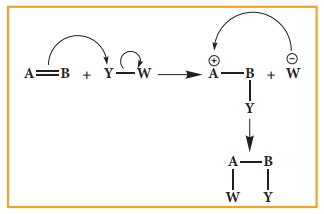 Brominatin of alkene to give bromo alkane is an example for this reaction. 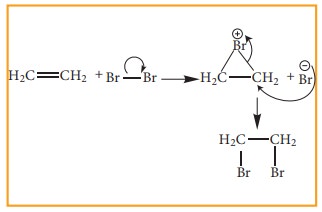 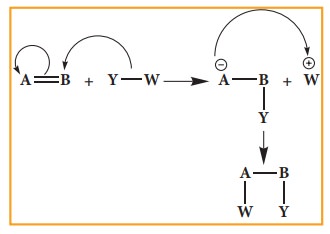 Example: addition of HCN to acetaldehyde

A General freeradical addition reaction can be represented as below. 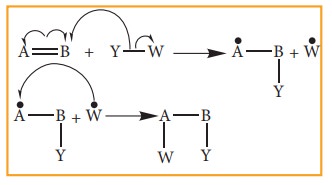 In the above reaction, Benzoyl peroxide acts as a radical initiator. The mechanism involves free radicals.

In this reaction two substituents are eliminated from the molecule, and a new C-C double bond is formed between the carbon atoms to which the eliminated atoms/groups are previously attached. Elimination reaction is always accompanied with change in hybridisation.

n-Propyl bromide on reaction with alcoholic KOH gives propene. In this reaction hydrogen and Br are eliminated. 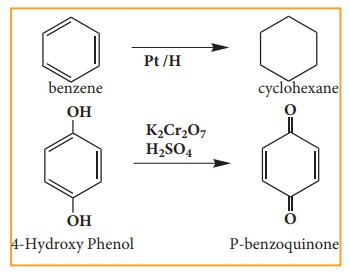