There are two basic types.

❖Toric lenses (known as cylindrical lenses) refract light only along one axis.Spherical and toric lenses can be combined where indicated.

The refractive power of the lenses is measured manually or automatically with an optical interferometer. The measured refraction is specified as spherocylindrical combination. By convention, the specified axis of the cylin-drical lens is perpendicular to its axis of refraction (Fig. 16.15c and d). The orientation of this axis with respect to the eye is specified on a standardized form (Fig. 16.16). 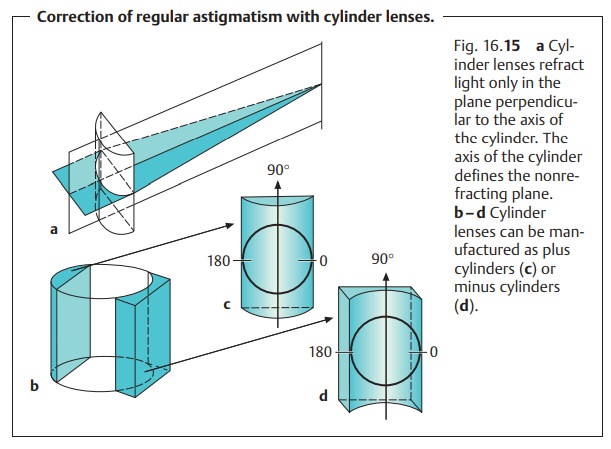 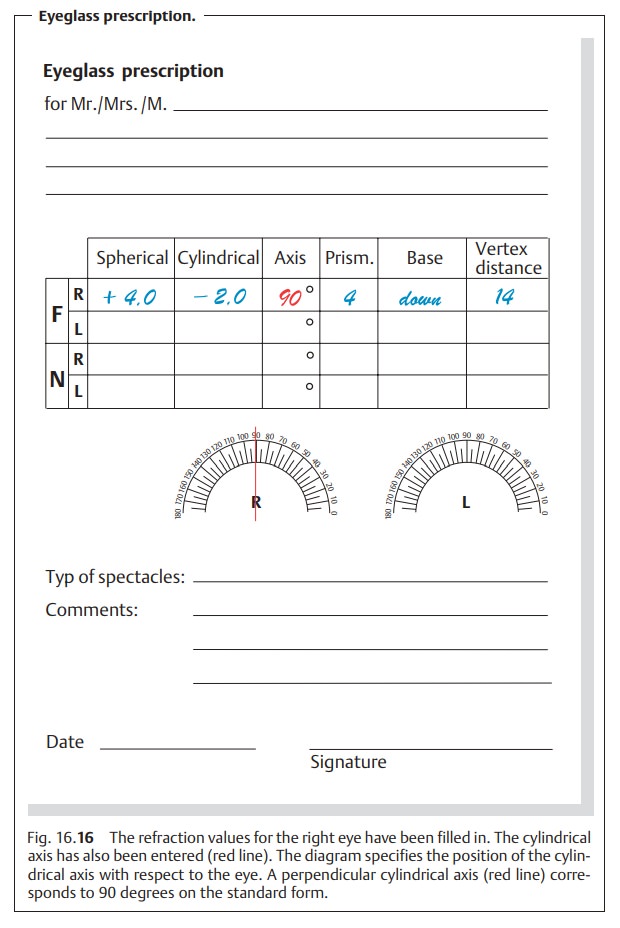 Example: + 4.00 diopters –2.00 diopters/90 degrees means that the lens rep-resents a combination of converging lens (+ 4 diopters) and cylindrical lens (–2 diopters) with its axis at 90 degrees.

These lenses include athird refractive correctionbetween the dis-tance and near-field portions. This intermediate portion sharply images theintermediate field between distance vision and reading range without any needfor accommodation (Fig. 16.17c).

These lenses were developed tominimizeabrupt image changes when the gaze moves through the different correctionzones of the lens while maintaining a sharp focus at every distance (Fig. 16.18).

These eyeglasses also offer cosmetic advantages. They produce wellfocused images in the central region but have a high degree of peripheral astig-matism. However, many patients learn to tolerate this peripheral distortion. 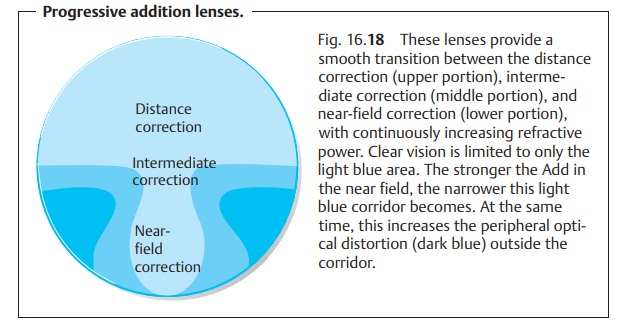 Presbyopic patients tolerate progressive addition lenses better when they still have only slight presbyopia and have not previously worn bifo-cals.

The following types of lenses have been developed for special applications:

These lenses reduce the weight of eyeglasses where severeametropia must be corrected. Another advantage is that these lenses are largely shatterproof, which is why they are preferred for children. However, they are easily scratched.

These lenses are indicated in patients withincreased sen-sitivity to glare.

Operating motor vehicles in twilight or at night with eyeglasses that absorb more than 20% of incident light is dangerous because of the resulting reduction in visual acuity.

Photochromatic lenses pose problems for patients operating motor vehicles. The lenses darken only slightly in a warm car with the windows closed due to the lack of ultraviolet light. Dark lenses lighten too slowly when the car enters a tunnel.

Extremely thin coatings of magnesium fluoride can beapplied to lenses to reduce surface reflection on the front and back of the lens.

While the patient looks at vision charts, the examiner places various combi-nations of lenses in front of the patient’s eye. The patient reports which of two lenses produces the sharper image. The better of the two is then compared with the next lens. This incremental method identifies the optimal correc-tion. It is expedient to use the patient’s objective refraction as the starting point for subjective testing. Refraction testing is performed either with a series of test lenses from a case or with a Phoroptor, which contains many lenses that can be automatically or manually placed before the patient’s eye.

The examination proceeds in three stages:

❖ Monocular testing: The optimal refraction for achieving best visual acuityis determined separately for each eye. The weakest possible minus lens is used in myopic patients, and the strongest possible plus lens in hyperopicpatients. The red-green chromatic aberration test can be used for finerefraction. In this test, the patient compares optotypes on green and red backgrounds. Fine adjustment of refraction permits precise shifting of the focal point of the light on the retina. Optotypes on both red and green backgrounds then appear equally sharply defined.

❖Binocular testing: The objective of this stage is to achieve abalancebetween both eyes.

❖Near point testing: The final stage of the examination determines thepatient’s near visual acuity, and, if necessary, the presbyopic addition (“Add”). Allowance is made for the patient’s preferred reading and working position.

The values determined by this examination are entered in the eyeglass pre-scription (see Fig. 16.16). The vertex distance at which refraction was per-formed is an important additional parameter for the optician. This is the distance between the back surface of the test lens and the anterior surface of the cornea. If the manufactured eyeglasses have a different vertex distance,then the strength of the lenses should be altered accordingly. This is because the optical effect of eyeglass lenses varies according to the distance from the eye.

Before the lenses are fitted into the frame, the distance between the pupils must be measured to ensure that the lenses are properly centered. The centerof the lens should be in front of the pupil. The prismatic effects of eccentriclenses might otherwise cause asthenopic symptoms such as headache or a burning sensation in the eyes.

To facilitate early detection of glaucoma, intraocular pressure should be measured in any patient over the age of 40 presenting for refraction testing for eyeglasses.