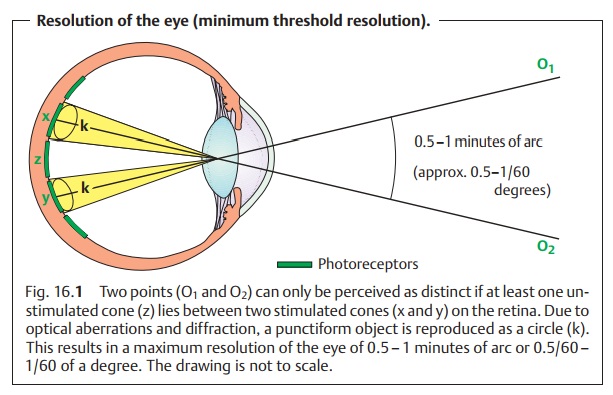 This refers to the resolving power of the eyewithout corrective lenses.

This refers to the resolving power of the eye with anoptimal correction provided by corrective lenses (determined by visual acu-ity testing).

Both uncorrected visual acuity and corrected visual acuity provide infor-mation on how far apart two objects must be for the eye to perceive them as distinct objects (minimum threshold resolution). For the eye to perceive two objects as distinct, at least one unstimulated cone must lie between two stimulated cones on the retina. The cone density is greatest in the center of the retina and central visual acuity is highest. There the cones are spaced only 2.5 µm apart. This interval increases toward the periphery of the retina, and both uncorrected visual acuity and corrected visual acuity decrease accordingly. Cone spacing and physical effects such as diffraction and optical aberrations limit the average minimum threshold resolution, the minimumvisual angle to one minute of arc (the individual maximum value is approxi-mately 30 seconds of arc). One minute of arc is 1/60 of a degree or approxi-mately 0.004 mm, which is somewhat more than the width of a cone. This corresponds to the maximum resolving power of the retina (Fig. 16.1). 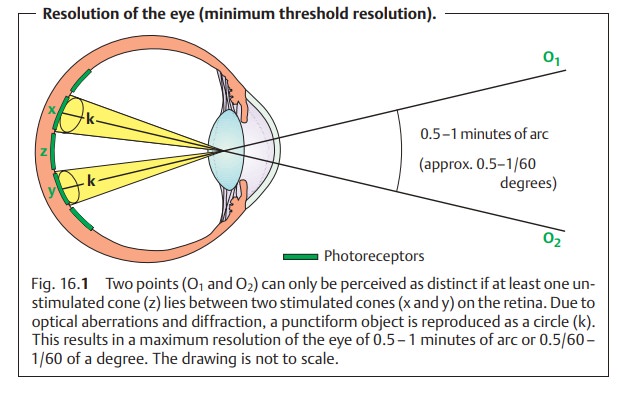 Refraction is defined as the ratio of the refractive power of the lens and cornea (the refractive media) to the axial length of the globe. Emmetropia is distin-guished from ametropia.

The ratio of the axial length of the eye to therefractive power of the cornea and lens is balanced. Parallel light rays that enter the eye therefore meet at a focal point on the retina (Figs. 16.2 and 16.6a) and not anterior or posterior to it, as is the case in ametropia. 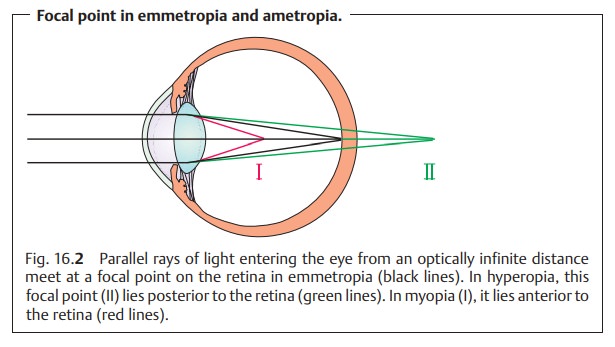 There is a mismatch between the axial lengthof the eye and the refractive power of the lens and cornea. The ametropia is either axial, which is common, or refractive, which is less frequently encoun-tered. The most common disorders are nearsightedness, farsightedness, and astigmatism.

Emmetropia is not necessarily identical to good visual acuity. The eye may have other disorders that reduce visual acuity, such as atrophy of the optic nerve or amblyopia.

The refractive power of an optical lens system is specified in diopters, which are the international units of measure. Refractive power is calculated accord-ing to the laws of geometric optics. According to Snell’s law, the refraction of the incident light ray is determined by the angle of incidence and difference in the refractive indices n of the two media (Table 16.1).

The maximum total refractive power of an emmetropic eye is 63 diopters with an axial length of the globe measuring 23.5 mm. The cornea accounts for 43 diopters and the lens for 10 – 20 diopters, depending on accommodation. However, the refractive power of the eye is not simply the sum of these two values. The optic media that surround the eye’s lens system and the distance between the lens and cornea render the total system more complex.

The refractive power D (specified in diopters) of an optical system is the reciprocal of the focal length of a lens f (specified in meters). This yields the equation: D = 1/f.

The refractive power of the eye described in the previous section is not a con-stant value. The eye’s refractive power must alter to allow visualization of both near and distant objects with sharp contours. This accommodation is made possible by the elasticity of the lens.

❖ Lens: The soluble proteins of the lens are surrounded by a thin elastic cap-sule. The curvature of the posterior capsule of the lens is greater than its anterior curvature, with a posterior radius of 6.0 mm as opposed to an anterior radius of 10.0 mm. The intrinsic elasticity of the lens capsule tends to make the lens assume a spherical shape. However, in the unaccommo-dated state this is prevented by the pull of the zonule fibers. The elasticity of the inner tissue of the lens progressively decreases with age due to deposits of insoluble proteins.

❖ Zonule fibers: The radiating zonule fibers insert into the equator of thelens and connect it to the ciliary body. They hold the lens securely in posi-tion and transmit the pull of the ciliary muscle to the lens.

❖Ciliary muscle: Contraction of the ring-shaped ciliary muscledecreases thetension in the zonule fibers. The lens can then approach the spherical shape (with a radius of curvature of 5.3 mm) that its physical configuration and chemical composition would otherwise dictate. This change in the curvature of the lens is especially pronounced in its anterior surface. The deformation increases the refractive power; the focus of the eye shifts to the near field (Fig. 16.4), and close objects take on sharp contours. As the ciliarymuscle relaxes, the tension on the lens increases and the lens flattens. Theresulting decrease in refractive power shifts the focus of the eye into the distance (Fig. 16.4), and distant objects take on sharp contours. 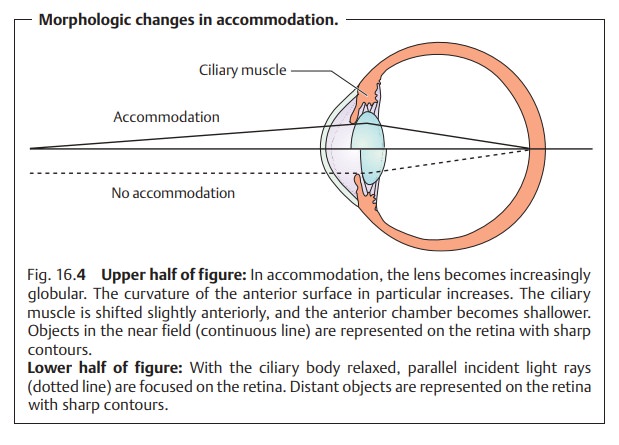 The ciliary muscle is innervated by the short ciliary nerves, postganglionic parasympathetic fibers of the oculomotor nerve. Parasympatholytics such as atropine, scopolamine, and cyclopentolate inhibit the function of the ciliary muscle and therefore prevent accommodation. Referred to as cycloplegics, these medications also cause mydriasis by inhibiting the sphincter pupillae.

When the ciliary muscle is at rest, the zonule fibers are under tension and the eye focuses on distant objects. 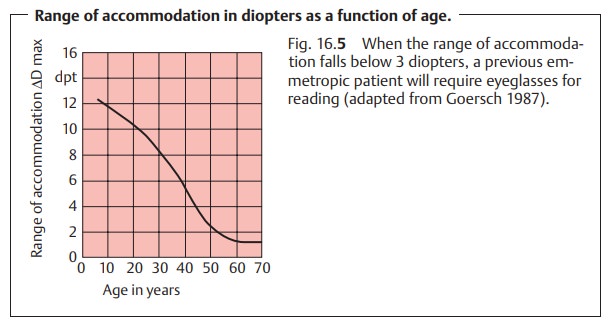 Example: In one patient, the near point lies at 0.1 m and the far point at 1 m.This patient’s range of accommodation is then 10 diopters –1 diopter = 9 diopters. 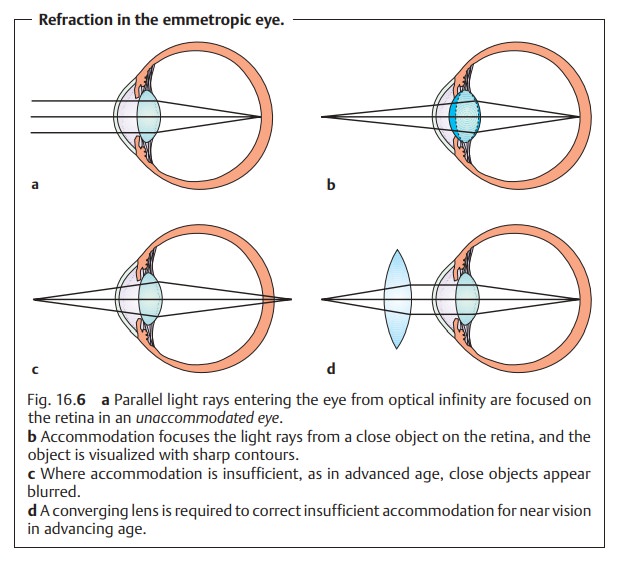 Adaptation to Differences in Light Intensity

Like a camera, the eye’s aperture and lens system also automatically adapts to differences in light intensity to avoid “overexposure”. This adjustment is effected by two mechanisms.

1. The iris acts as an aperture to control the amount of light entering the eye. This regulation takes about one second and can change the light inten-sity on the retina over a range of about a power of ten.