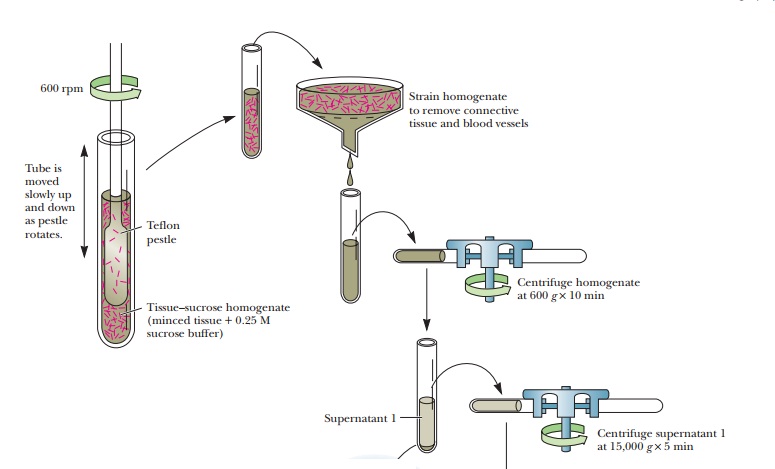 How do we get the proteins out of the cells?

Many different proteins exist in a single cell. A detailed study of the properties of any one protein requires a homogeneous sample consisting of only one kind of molecule. The separation and isolation, or purification, of proteins constitutes an essential first step to further experimentation. In general, separation techniques focus on size, charge, and polarity-the sources of differences between molecules. Many techniques are performed to eliminate contaminants and to arrive at a pure sample of the protein of interest. As the purification steps are followed, we make a table of the recovery and purity of the protein to gauge our success. Table 5.1 shows a typical purification for an enzyme. The percent recovery column tracks how much of the protein of interest has been retained at each step. This number usually drops steadily during the purification, and we hope that by the time the protein is pure, sufficient product will be left for study and characterization. The specific activity column compares the purity of the protein at each step, and this value should go up if the purification is successful. 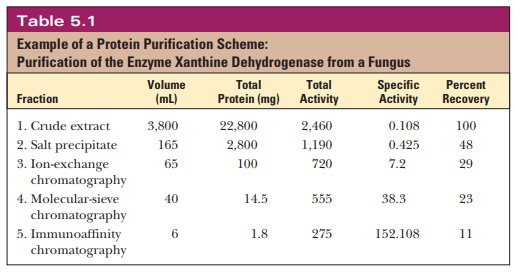 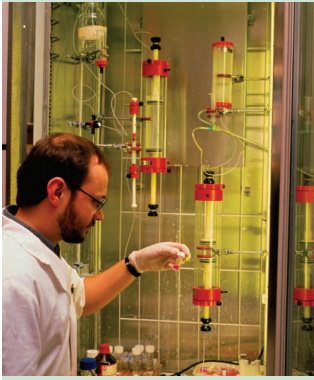 How do we get the proteins out of the cells?

Before the real purification steps can begin, the protein must be released from the cells and subcellular organelles. The first step, called homogenization, involves breaking open the cells. This can be done with a wide variety of techniques. The simplest approach is grinding the tissue in a blender with a suitable buffer. The cells are broken open, releasing soluble proteins. This process also breaks many of the subcellular organelles, such as mitochondria, peroxisomes, and endoplasmic reticulum.

A gentler technique is to use a Potter–Elvejhem homogenizer, a thick-walled test tube through which a tight-fitting plunger is passed. The squeezing of the homogenate around the plunger breaks open cells, but it leaves many of the organelles intact. Another technique, called sonication, involves using sound waves to break open the cells. Cells can also be ruptured by cycles of freezing and thawing. If the protein of interest is solidly attached to a membrane, detergents may have to be added to detach the proteins. After the cells are homogenized, they are subjected to differential centrifugation.

Spinning the sample at 600 times the force of gravity (600 3g) results in a pellet of unbroken cells and nuclei. If the protein of interest is not found in the nuclei, this precipitate is discarded. The supernatant can then be centrifuged at higher speed, such as 15,000 3g, to bring down the mitochondria. Further centrifugation at 100,000 3g brings down the microsomal fraction, consisting of ribosomes and membrane fragments. If the protein of interest is soluble, the supernatant from this spin will be collected and will already be partially puri-fied because the nuclei and mitochondria will have been removed. Figure 5.1 shows a typical separation via differential centrifugation. 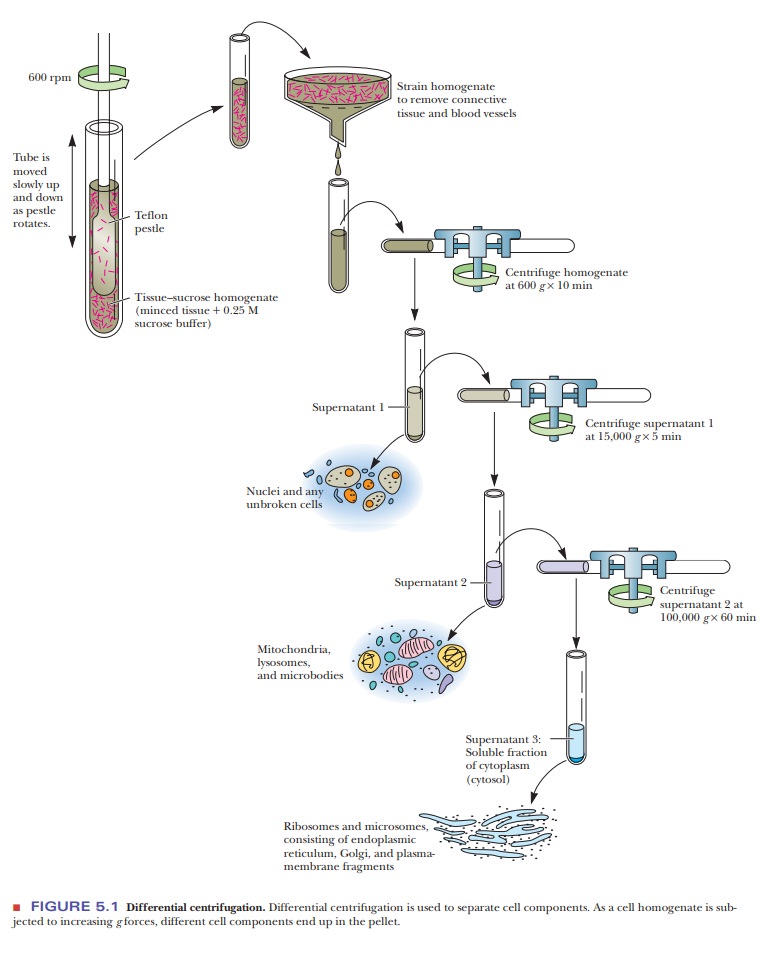 After the proteins are solubilized, they are often subjected to a crude purifi-cation based on solubility. Ammonium sulfate is the most common reagent to use at this step, and this procedure is referred to as salting out. Proteins have varying solubilities in polar and ionic compounds. Proteins remain soluble because of their interactions with water. When ammonium sulfate is added to a protein solution, some of the water is taken away from the protein to make ion–dipole bonds with the salts. With less water available to hydrate the proteins, they begin to interact with each other through hydrophobic bonds. At a defined amount of ammonium sulfate, a precipitate that contains contaminat-ing proteins forms. These proteins are centrifuged down and discarded. Then more salt is added, and a different set of proteins, which usually contains the protein of interest, precipitates. This precipitate is collected by centrifugation and saved. The quantity of ammonium sulfate is usually measured in compari-son with a 100% saturated solution. A common procedure involves bringing the solution to around 40% saturation and then spinning down the precipitate that forms. Next, more ammonium sulfate is added to the supernatant, often to a level of 60%–70% saturation. The precipitate that forms often contains the protein of interest. These preliminary techniques do not generally give a sample that is very pure, but they serve the important task of preparing the crude homogenate for the more effective procedures that follow.

To begin the process of purification, proteins are released from cells with homogenization using a variety of physical techniques.