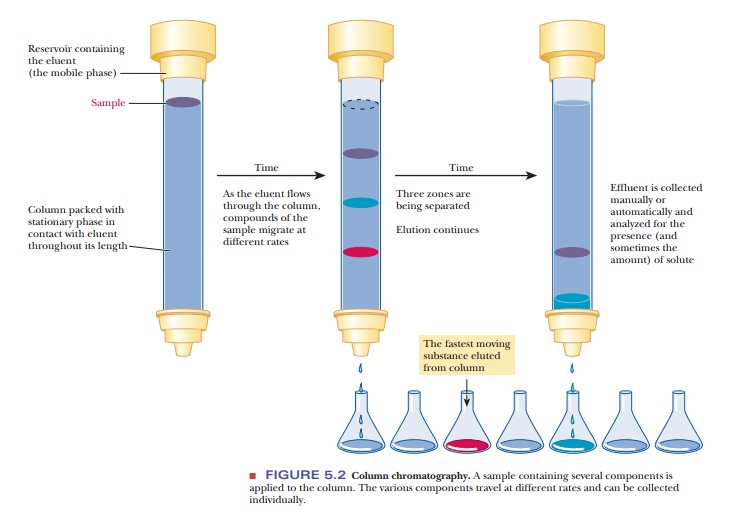 What are the different types of chromatography?The word chromatography comes from the Greek chroma, “color,” and graphein, “to write”; the technique was first used around the beginning of the 20th century to separate plant pigments with easily visible colors.

The word chromatography comes from the Greek chroma, “color,” and graphein, “to write”; the technique was first used around the beginning of the 20th century to separate plant pigments with easily visible colors. It has long since been possible to separate colorless compounds, as long as methods exist for detecting them. Chromatography is based on the fact that different compounds can distribute themselves to varying extents between different phases, or separable portions of matter. One phase is the stationary phase, and the other is the mobile phase. 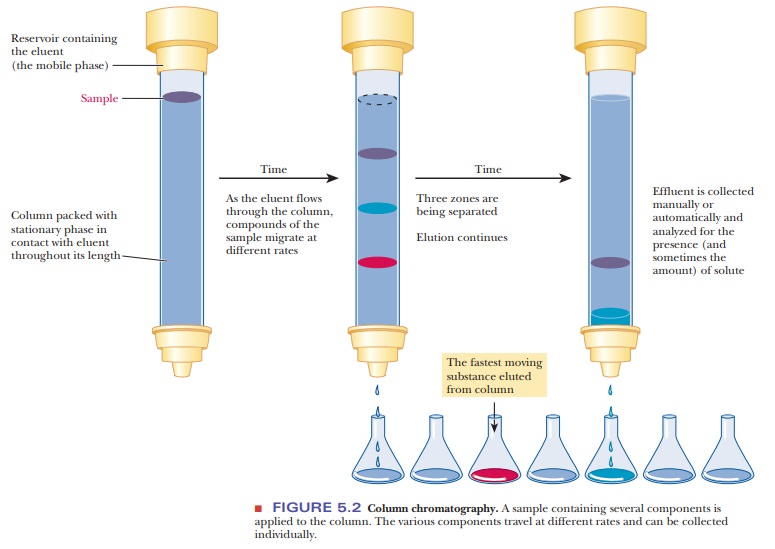 Many chromatographic techniques used for research on proteins are forms of column chromatography, in which the material that makes up the stationary phase is packed in a column. The sample is a small volume of concentrated solution that is applied to the top of the column; the mobile phase, called the eluent, is passed through the column. The sample is diluted by the eluent, andthe separation process also increases the volume occupied by the sample. In a successful experiment, the entire sample eventually comes off the column. Figure 5.2 diagrams an example of column chromatography. 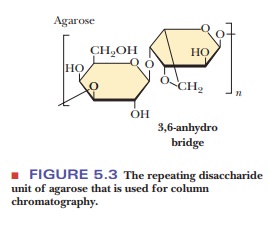 The first is a carbohydrate polymer, such as dextran or agarose; these two polymers are often referred to by the trade names Sephadex and Sepharose, respectively (Figure 5.3). The second is based on polyacrylamide (Figure 5.4), which is sold under the trade name Bio-Gel. The cross-linked structure of these polymers produces pores in the material. The extent of cross-linking can be controlled to select a desired pore size. When a sample is applied to the column, smaller molecules, which are able to enter the pores, tend to be delayed in their progress down the column, unlike the larger molecules. As a result, the larger molecules are eluted first, followed later by the smaller ones, after escaping from the pores. Molecular-sieve chromatography is represented schematically in Figure 5.5. The advantages of this type of chromatography are (1) its convenience as a way to separate molecules on the basis of size and (2) the fact that it can be used to estimate molecular weight by comparing the sample with a set of standards. Each type of gel used has a specific range of sizes that separate linearly with the log of the molecular weight. Each gel also has an exclusion limit, a size of protein that is too large to fit inside the pores. All proteins that size or larger elute first and simultaneously. 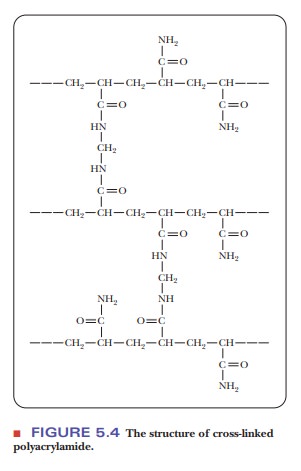 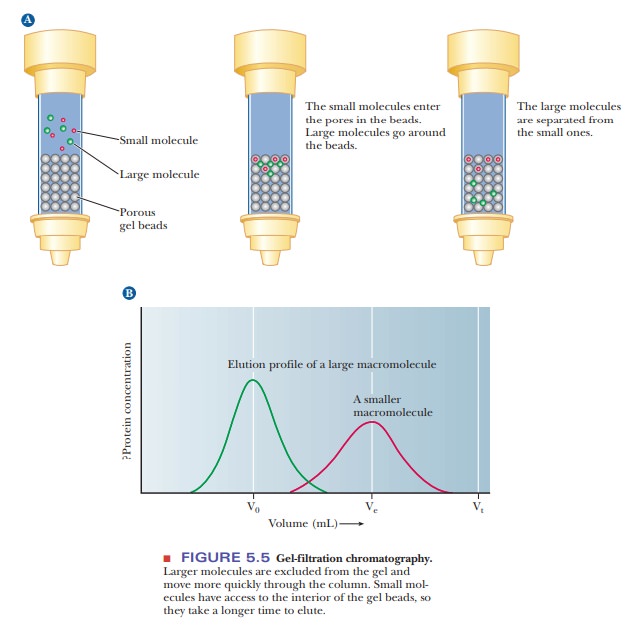 Affinity chromatography uses the specific binding properties of many pro-teins. It is another form of column chromatography with a polymeric material used as the stationary phase. The distinguishing feature of affinity chroma-tography is that the polymer is covalently linked to some compound, called a ligand, that binds specifically to the desired protein (Figure 5.6). The other proteins in the sample do not bind to the column and can easily be eluted with buffer, while the bound protein remains on the column. The bound protein can then be eluted from the column by adding high concentrations of the ligand in soluble form, thus competing for the binding of the protein with the stationary phase. The protein binds to the ligand in the mobile phase and is recovered from the column. This protein–ligand interaction can also be disrupted with a change in pH or ionic strength. Affinity chromatography is a convenient separation method and has the advantage of producing very pure proteins. 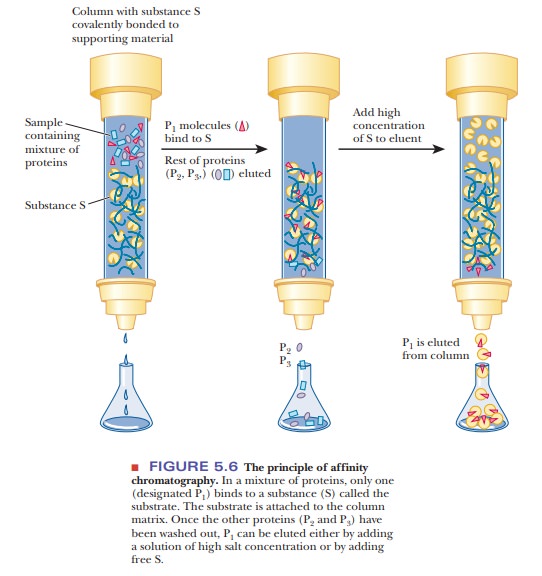 Ion-exchange chromatography is logistically similar to affinity chroma-tography. Both use a column resin that binds the protein of interest. With ion-exchange chromatography, however, the interaction is less specific and is based on net charge. An ion-exchange resin has a ligand with a positive charge or a negative charge. A negatively charged resin is a cation exchanger, and a positively charged one is an anion exchanger. Figure 5.7 shows some typical ion-exchange ligands. Figure 5.8 illustrates their principle of operation with three amino acids of different charge. Figure 5.9 shows how cation exchange chromatography would separate proteins. The column is initially equilibrated with a buffer of suitable pH and ionic strength. The exchange resin is bound to counterions. A cation-exchange resin is usually bound to Na+ or K+ ions, and an anion exchanger is usually bound to Cl– ions. A mixture of proteins is loaded on the column and allowed to flow through it. Proteins that have a net charge opposite to that of the exchanger stick to the column, exchanging places with the bound counterions. Proteins that have no net charge or have the same charge as the exchanger elute. After all the nonbinding proteins are eluted, the eluent is changed either to a buffer that has a pH that removes the charge on the bound proteins or to one with a higher salt concentration. The latter outcompetes the bound proteins for the limited binding space on the column. The once-bound molecules then elute, having been separated from many of the contaminating ones. 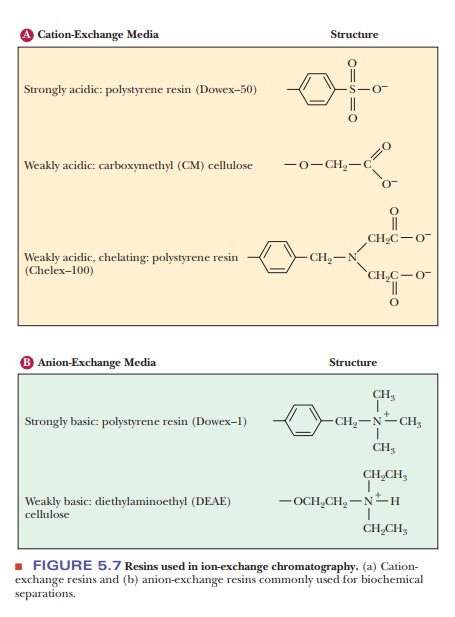 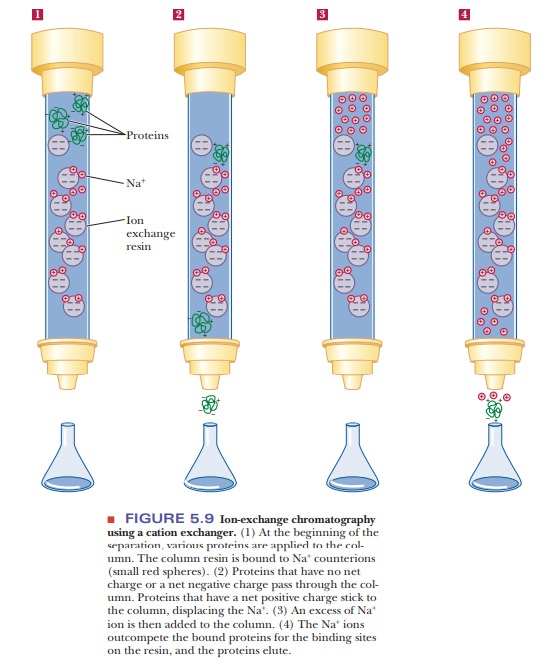 In gel-filtration chromatography, proteins are separated by size.

In ion-exchange chromatography, molecules with a specific charge are selectively bound to a column, separated from proteins that don’t bind, and then eluted.

In affinity chromatography, molecules are bound to the column via specific interactions for a bound ligand. Once nonbinding proteins are removed, the protein of interest can be eluted.