Expression systems for proteins of therapeutic interest include both pro- and eukaryotic cells (bacteria, yeast, fungi, plants, insect cells, mammalian cells, and transgenic animals). The choice of a particular system will be determined to a large extent by the nature and origin of the desired protein, the intended use of the product, the amount needed, and the cost.

In principle, any protein can be produced using genetically engineered organisms, but not every type of protein can be produced by every type of cell. In the majority of cases the protein is foreign to the host cells that have to produce it and although the translation of the genetic code can be performed by the cells, the post-translation modifications of the protein might be different as compared to the original product.

At present, over 60 different post-translation modifications of proteins are known and these mod-ifications are species and/or cell-type specific. The metabolic pathways that lead to these modifications are genetically determined by the host cell. Thus, even if the cells are capable of producing the desired post-translation modification, like glycosylation, still the resulting glycosylation pattern might be different from that of the native protein. For example, prokaryotic cells, like bacteria, are not capable of producing glycoproteins, because they lack this post-translation modification capacity. One possible solution to these problems is to use cell types that are as closely related to the original protein-producing cell type as possible, particularly when one considers that more than 50% of human proteins are glycoproteins. Therefore, for hu-man derived proteins, mammalian cells or transgenic animals are often a better choice than bacteria or yeast. However, developments in the field of glycosylation engineering may allow bacteria to reproduce some of the post-translation modification steps common to eukaryotic cells (Borman, 2006). Although still in its infancy, this technology could have a significant impact on future production systems.

Generalized features of proteins expressed in different biological systems are listed in Table 1 (Walter et al., 1992). However, it should be kept in mind that there are exceptions to this table for specific product/expression systems.

Foreign genes can be introduced into animals like mice, rabbits, pigs, sheep, goats, and cows through nuclear transfer and cloning techniques. The desired protein is expressed in the milk of the female offspring. During lactation the milk is collected, the milk fats are removed and the skimmed milk is used as the starting material for the purification of the protein.

The advantage of this technology is the relatively cheap method to produce the desired proteins in vast quantities. A disadvantage is the concern about the animal health. Some proteins expressed in the mammary gland leak back into the circulation and cause serious negative health effects. An example is the expression of erythropoetin in cows. Although the protein was well expressed in the milk, it caused severe health effects and these experiments were stopped.

The purification strategies and purity require-ments for proteins from milk are not different from those derived from bacterial or mammalian cell systems, with the possible exception of proteins for oral use when expressed in milk that is otherwise consumed by humans. In the latter case, the “con-taminants” are known to be safe for consumption.

The transgenic animal technology for the pro-duction of pharmaceutical proteins is still under development. No products have reached the market yet. More details about this technology are presented. 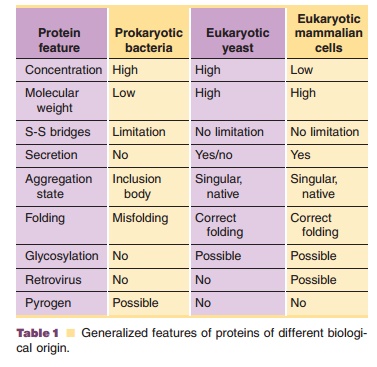 Therapeutic proteins can also be expressed in plants and plant cell cultures. For instance, human albumin has been expressed in potatoes and tobacco. Whether these production vehicles are economically feasible has yet to be established. The lack of genetic stability of plants is sometimes a drawback. Furthermore, most plants contain phenolic oxidases that can damage the expressed protein upon extraction from the plant material. A better route is the expression of the protein in edible seeds. Forinstance, rice and barley can be harvested and easily kept for a prolonged period of time as raw material sources. Especially for oral therapeutics or vaccines this might be the ideal solution to produce large amounts of cheap therapeutics, because the “con-taminants” are known to be safe for consumption.

The use of plant systems for the production of pharmaceutical proteins is still in an experimental phase. More details about this technology are presented.